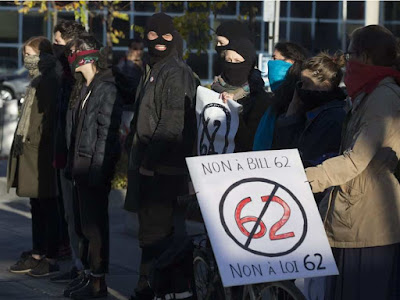 It may not necessarily 'mean' anything. It may not even be necessarily indicative of what we can expect to see in the future in electoral politics. It is, however, interesting to note that so far, whether one buys them as a genuine attempt at laicite/secularism or whether one sees them as a cynical display of pandering to xenophobia and people's basest instincts, provincial legislative attempts at "religious neutrality" have been electoral flops in Quebec. And this despite enjoying seemingly consistent popular support in opinion polling.

There was the Charte des valeurs (CdV) that was introduced by the Parti Quebecois when they were in power under former Premier Pauline Marois. This piece of legislation was supposed to be the golden key that would deliver the then minority PQ government a majority. The CdV had enjoyed widespread and consistent support in opinion polling in Quebec throughout this time period. This failed to translate into electoral success, however, and the PQ was heavily defeated in the 2014 provincial election.

Of course, this is not to say that the Charte des valeurs was the reason Pauline Marois' government was defeated. There were many angles to that election. Who can forget the infamous "fist-pump" incident of Pierre-Karl Peladeau vowing to have a sovereignty referendum, derailing the "sitting on the fence on the sovereignty issue" position that the PQ had officially decided to adopt throughout that election? Heck, perhaps the PQ government was defeated despite the CdV, rather than because of it. This is a debatable contention, with reasonable-sounding arguments from both sides.The point is the party that proposed it wound up being ousted.

After that, along came Bill 62, introduced (and now implemented) by the Quebec Liberal government of Premier Philippe Couillard that defeated the PQ. Like its predecessor (the CdV), the spirit and essence of Bill 62 appears to enjoy widespread popular support. However, Monday's federal by-election in Lac-Saint-Jean saw that riding fall into federal Liberal hands, despite talk and speculation that Bill 62's popularity in opinion polling could hand the seat to the Bloc Quebecois (BQ). The BQ, out of all the federal parties, seems by far the most in agreement with the essence and spirit of Bill 62, while the federal Liberals oppose it - albeit weakly.

Of course, it is again easy to counter this view with the fact that there are many angles that one could look at the federal by-election results from. Perhaps Bill 62 didn't even really play a significant part, given that it is a provincial issue.

One would think, however, that if solutions like the ones that Bill 62 purports to remedy enjoy such widespread polling support as to make the bill a high-priority item for the Quebecois -- as the actions of National Assembly politicians appear to imply -- that some of that would have found its way into the federal by-election results. The Liberals' stance on Bill 62 is that they oppose it. Trudeau was even questioned repeatedly on his stance during the Lac-Saint-Jean campaign. Yet the Liberal candidate ended up winning the by-election (albeit with just 38% of the popular vote as the non-Liberal vote was split 4-ways). Perhaps Bill 62 played absolutely no role whatsoever in Lac-Saint-Jean's federal by-election results? Who knows?

What is noteworthy is that while provincial legislation such as the Charte des valeurs and Bill 62 consistently seem to enjoy widespread support in public opinion polls, they never (so far) seem to deliver electorally. Could it be that politicians are simply overestimating the importance of this issue to voters? Could it be that, while it may be true that most Quebec voters agree with the spirit of such legislation, it simply isn't a vote-determining priority for them? Could it be that, perhaps, Quebec voters agree with the principle of secularism but aren't so much on board with the state legislating what people can or cannot wear? Could it be that Quebec voters genuinely want a demonstration of the religious neutrality of the state, but they want it done without the whiff of xenophobia that, according to many, seems to accompany recent attempts? It is difficult to tell.

The argument that voters simply aren't motivated by this issue at the ballot-box could be rebuffed by pointing out that the federal NDP lost a considerable amount of support in Quebec, during the last federal election, in part due to their opposition to the notion that religious face-coverings be banned. However, the federal Liberals at the time took a virtually identical position on the same issue, yet did not suffer a backlash.

It is a bit short-sighted to view the niqab issue as the reason for the collapse in NDP support in Quebec in 2015. Many other factors played a part, like the party's promise to balance the budget within their first year in power. The niqab issue was likely a catalyst, rather than a cause, to already-waning support in Quebec during the last federal election. In addition, the parties that most aggressively promoted the niqab-ban (the Tories and Bloc Quebecois) were not rewarded for their stances in that federal election.

We now live in a political age where voters generally tend to dislike, and are not afraid of repudiating, politicians at the ballot box who they perceive to be "too cute by half"/acting too explicitly calculatingly and cynically. Could it be that Quebec voters didn't see the motives behind the PQ's Charte des valeurs as being actually based on genuine principle, but rather as a cynical vote-buying move? Could the same be said regarding the Couillard Liberals' Bill 62, providing a possible explanation as to why opposing it didn't appear to hurt the federal Liberals?

We will be able to discern some kind of pattern as this issue is put to the electoral test a few more times. Until then, we have yet to see an example of provincial legislation like the Charte des valeurs or Bill 62 deliver unquestionable electoral success, despite what public opinion polling appears to indicate.

Ammario Reza is the co-founder of NDP Grassroots-Ralliement populaire NPD, with a background in Political Science. He is a writer, commentator and activist primarily based in Ottawa. He works varying contract positions for various NDP and other progressive campaigns, in addition to being a liaison for author Linda McQuaig's speaking engagements.

See also: Quebec Bill 62 is not about secularism and must be opposed by the left

See also: Fake 'secularism' is not an excuse for Islamophobic bigotry
Posted by Michael Laxer at 4:47 PM