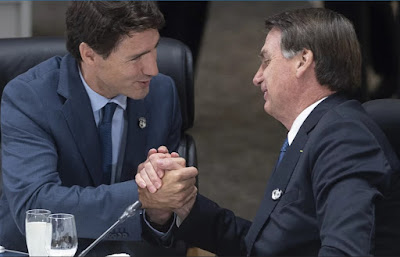 Update: Since this was first published there has been a military coup in Bolivia that predictably and shamefully Canada has immediately backed.

Canada's total hypocrisy and double standards in South and Central America are on full display, again, after the profoundly cynical Trudeau government and Global Affairs Canada stated on Tuesday that they would not recognize the Bolivian election results.


Leftist Evo Morales won the Presidential elections in the first round with over 47% of the vote. Bolivia's election laws allow for a first round win by a candidate even with less than 50% of the vote as long as they get over 40% and also lead their closest competitor by over 10% which Morales did.

Both Morales and others warned in advance of the elections that the United States and its imperialist allies were planning a coup should the left win the elections. It would seem that sock puppet Canada is stepping up to play its part.

While Trudeau and Canada are speaking out on Bolivia -- despite the fact the Bolivians are allowing an OAS audit of the election results to proceed -- why not take a look at events in the region that they have not spoken up about.

- Canada recognized the results of the elections in Brazil that saw fascist Jair Bolsonaro take the Presidency despite the fact that allies of Bolsonaro had imprisoned his main potential opponent -- leftist former President Lula da Silva (popularly known as Lula) -- on trumped up corruption charges. The process leading to Lula's jailing was totally rigged. Canada has not questioned Bolsonaro's legitimacy in anyway. In fact you see can a picture of Trudeau and Bolsonaro warmly greeting each other above.

- Since the eruption of protests against a transit fare hike that transformed into general strikes and mass demonstrations against neo-liberalism and inequality in Chile generally, the Chilean government has imposed curfews and martial law with the military patrolling the streets in a disturbing echo of the Pinochet era. Hundreds of people have been arrested, hundreds more injured or shot, at least 20 killed and there are widespread reports of torture, sexual assault and rape by the Chilean military and police. Not a peep from Canada. In fact Trudeau had a pleasant chat with the Chilean President on Tuesday.

- After betraying his promise to continue with his predecessor's leftist agenda, Ecuadoran President Lenín Moreno adopted a harsh austerity regime in exchange for IMF loans and began to intimidate, harass and arrest some of his former allies. A mass protest movement against these moves led by Indigenous peoples in early October has forced Moreno to back down, at least for now. During these protests Ecuador imposed martial law, and police violence and brutality led to the deaths of at least seven people, the wounding of at least 1,300, the arrests of at least 1,100 and the imposition of a 24 hour curfew in the capital. Canada said nothing.

- Honduras saw a military coup in 2009 that ousted the democratically elected government of President Manuel Zelaya. Since then a series of clearly fraudulent elections have ensured that right wing, pro-American and pro-business governments have remained in power including a sham election in 2017 that saw the "victory" of  President Juan Orlando Hernández. Canada?:


“Canada has remained a steadfast ally to the [post-coup] regime,” Tyler Shipley, professor at Humber College and author of the book Ottawa and Empire: Canada and the Military Coup in Honduras, says. “Canada helped the coup government consolidate its power, and worked diplomatically to reintegrate the country into the OAS after they were kicked out of the organization. Canada was also one of the first to recognize the election in 2009 after the coup.”

This support began with the Harper government and continues under Trudeau and Foreign Minister Freeland.

According to Shipley "No country – save perhaps the United States – did more to facilitate the rise of the Honduran dictatorship than Canada" and "Canadians who believe that their country is a good citizen of the world would do well to take a closer look at the nightmare in Honduras. After all, it is a nightmare Canada has helped create."

- In Haiti there have been months of mass protests against President Jovenel Moïse.  "Police have killed dozens of demonstrators since anti-corruption protests began last year. In the worst documented case, the UN confirmed the Haitian government’s culpability in a terrible massacre of up to 71 civilians in the impoverished Port-au-Prince neighborhood of La Saline in mid-November 2018." And yet continued support for Moise by Canada led to the publication of an Open Letter signed by David Suzuki, Roger Waters, Linda Mcgaig, Amir Khadir, Will Prosper, Tariq Ali, Yann Martel, Maude Barlow, Sid Ryan, John Clarke and more than 100 other writers, musicians, activists and professors demanding that this stop.

It is perfectly clear that when Trudeau, Freeland and the Canadian government prattle on about "freedom" and "democracy" they are only talking about countries where leftist governments win elections such as Venezuela and Bolivia. Their concern for "freedom" is the freedom of big business and corporate interests to run South and Central American countries on behalf of international capital and their version of "democracy" are election results, fair or otherwise, that install governments that will reinforce this.
Posted by Michael Laxer at 7:24 AM