Secrets and Lies -- Chrystia Freeland's grandfather and collaborating with the Nazis 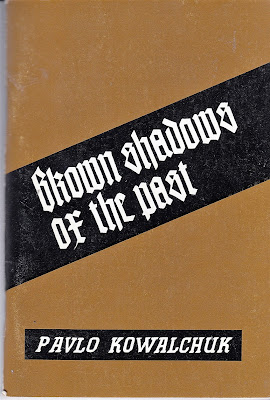 By now most people have heard at least vaguely about the fact that Liberal Foreign Affairs minister Chrystia Freeland had a grandfather, Mykhail Chomiak (sometimes also spelled Khomyak) who was a Ukrainian nationalist collaborator with the Nazis in Poland during the Second World War. He was the editor of a newspaper,  Krakivski Visti, that was not simply pro-Nazi, but published an array of viciously antisemitic articles (more on this point shortly).

As I outlined in a previous piece this should have been a serious issue for Freeland as:

It should be noted that she also made that tweet on Black Ribbon Day, which is supposed to actually, in part, honour victims of Nazism! It would be hard to make this up.

But as journalist Sheldon Kirshner has pointed out in a piece by the same name, it appears that "Chrystia Freeland Can Rest Easy Now"  as the whole affair seems to have blown over. As Kirshner and others have written her attempts to claim it was all a Russian misinformation campaign and "fake news" have been largely accepted while the truth about her grandfather's past has been largely ignored.

In fact, disgracefully, many have attempted to try to justify Chomiak's collaboration with claims that it should be "put in context" or ugly variations of the Nuremberg defense that somehow he had "no choice".

Kirshner wrote of this:


Much to its discredit, the CBC did not carry a single story on Chomiak. The majority of Canadian newspaper columnists who dealt with the Freeland affair dismissed it as a non-event or downplayed Chomiak’s position as a Nazi stooge.
Two examples will suffice.
Michael Harris, in I Politics, wrote, “Russia is working to destabilize democracies. Canada is now in (its) crosshairs.”
Colby Cash, in The National Post, declared, “I doubt whether it is appropriate for any of us to sit in judgment on Chomiak.”
These thoughtless and ignorant comments blurred reality rather than shedding light on actual events. Their unwillingness to deal with the issues honestly and fearlessly cast a thick pall on their positions as journalists.

But, as we shall see, this kind of grotesque apologist nonsense for Nazi collaborators is nothing new nor is attempting to claim it is all being made up by a foreign power.

Recently I came across a comprehensive booklet, Brown Shadows of the Past, published in 1985 by the Association of United Ukrainian Canadians. It was written by a Ukrainian Canadian Pavlo Kowalchuk and details in some depth the odious collaboration of the Ukrainian nationalist organizations and press with the Nazis including against their own people. Kowalchuk was disgusted by this history and by attempts to claim it was all Soviet lies or slanders so he quoted back to them the articles these nationalists had written during the war. As he put it, "written statements are hard to deny".

Note that this is long, long before Putin and is not a part of any disinformation campaign by the present Russian government.

In this piece we are going to look at the type of Nazi propaganda that  Krakivski Visti, edited by Chomiak, engaged in including noxious and extreme antisemitism at a time when the Jews of Europe were being rounded up and exterminated. A note that the language that these Nazi collaborators used is ugly and deeply racist.

While Kowalchuck gave examples from many newspapers, in this part we will only be looking at those of  Krakivski Visti.

Here the author begins by noting that tens of millions of people did bravely resist the Nazis and fought against their extermination campaigns. While countless died doing so, throughout the war Krakivski Visti published antisemitic articles talking about "The Jewish Problem in the Ukraine", celebrating the Nazi invaders and using terms like "Jewish-Bolshevik degeneration".
He ends by very powerfully noting that then, as now, some try to justify or distort these unjustifiable actions and stances. 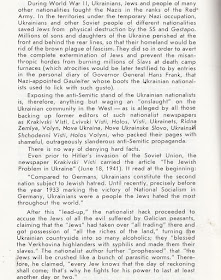 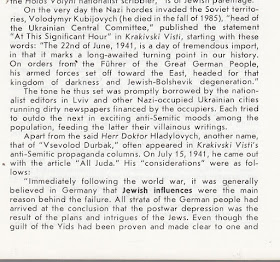 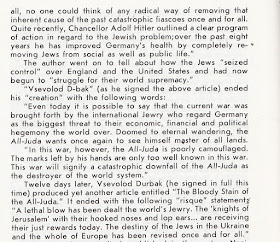 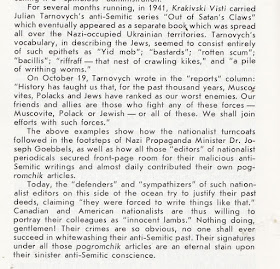 Here Kowalchuk looks at the origins of  Krakivski Visti and how it supported the Nazi war effort from the beginning including against the Western democracies and before the Nazis attacked the USSR. Since the claim is often made that people like  Chomiak were not really Nazis and were somehow driven to collaborate due to their hatred of the Communists and alleged love of freedom this is rather significant.
Note that in their worldview the Jews are not just behind Bolshevism but that the "Jewish plutocrats" play an important role in the West as well. 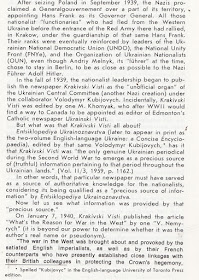 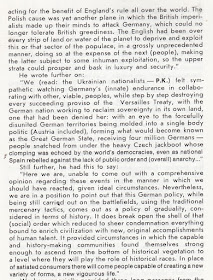 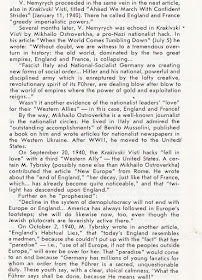 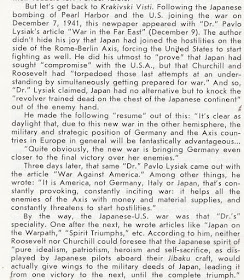 A prominent Krakivski Visti writer celebrates the invasion of the USSR (and the Ukraine) and prays for Hitler!
The war criminal Hans Frank thanks the paper for their support. 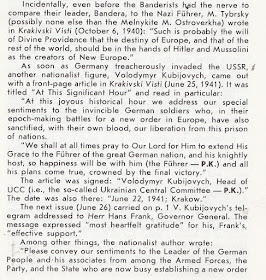 In appreciation of their efforts the Nazis give them a press stolen from its Jewish owners. 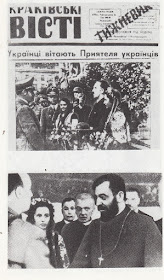 Krakivski Visti also published decrees made by the Nazis that were directly harmful to the Ukrainian people themselves such as this one below:

As you can see the role Krakivski Visti and other publications of its ilk played in supporting the Nazis against not just the USSR but generally, as well as in perpetuating the genocidal Nazi ideological portrayal of the Jews is easy to document, is inexcusable and is repugnant.

Those attempting to distort the reality of what Ukrainian nationalist Nazi collaborators like Chomiak did and what they stood for to suit their political narratives today should be profoundly ashamed of themselves.

A Nazi Skeleton in the Family Closet