Where Does the NDP Stand on Venezuela? 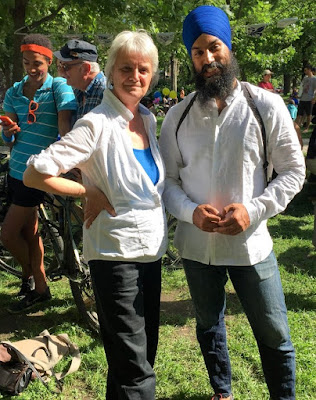 UPDATE, February 6:Hélène Laverdière has now publicly stated that her position is the party's official position:

"Foreign affairs critic Helene Laverdiere told the National Post that she speaks for her party when she says she’s “comfortable” with Canada recognizing a new, interim president in Juan Guaido."

Where does the NDP stand on Venezuela?


After New Democrat MP Niki Ashton tweeted her opposition to the Liberal government's collaboration with the American led coup agenda in Venezuela and statements by other New Democrats like Svend Robinson, Jagmeet Singh and the federal party appeared to take a stance opposing the recognition of the American handpicked presidential pretender Juan Guaido:


The question of who is to lead Venezuela should be in the hands of Venezuelans. All countries should be free to make their own democratic decisions through free and fair elections, independent of authoritative pressure or foreign interference.

Today, however, according to the National Post and NDP  foreign affairs critic Hélène Laverdière's own twitter feed that may no longer be the case.


Asked on Monday to respond to fears on the left that Canada is facilitating imperialism, Foreign Minister Chrystia Freeland said she finds the idea difficult to justify and hers is a pro-democracy position. The NDP, which had been hitherto agnostic, clarified its own position when foreign affairs critic Hélène Laverdière said Monday she now accepts the Liberal government’s recognition of Guaido — just not how they went about it.

Meanwhile on twitter Laverdière retweeted a tweet by French President Emmanuel Macron recognizing Guaido as the legitimate president of Venezuela:

So, which one is it?

Entirely predictably it would appear the NDP is going over to the imperialist camp.

Laverdière makes clear the NDP position is now in support of recognizing Guaido starting at around 1:40 in this video. She says that the EU countries that recognized him "did the right thing" and much more as well:

Posted by Michael Laxer at 6:41 PM