Catastrophe: The NDP lost because it deserved to 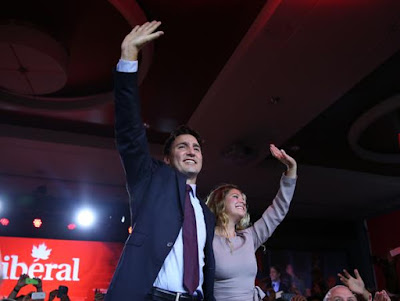 After being aggressively told that the "left" needed a leader like Tom Mulcair to shed its "radical" and "left" image, the party has been delivered to its worst defeat in its history. While it is true that the party will have a final number of seats that a generation ago would have seemed a victory, yesterday's results are a terrible setback.

We were fed the line that the sacrifices of principle were necessary. It was claimed they would produce electoral results.

But like taste tests between Coke and Coke Zero, this proved a chimera. When the NDP sought to be another "liberal" government in waiting with the dour Mulcair at the helm the people chose an obviously inspiring Liberal leader in Trudeau instead.

This was not due to the NDP running a "principled" campaign as some claim. It did not. It was not due, as some are conveniently suggesting, to the "niqab" issue either. If it were why did the NDP slide in the polls begin in Ontario after the "balanced budget" pledge the NDP made and why did Trudeau do so well in Quebec despite taking just as strong a stand on the issue?

The fact is, despite all the insults, Justin Trudeau proved a capable and even a remarkable leader. It turned out he had the very characteristics that over the course of a campaign the people wanted and that the pundits and the "strategists" running the NDP campaign misunderstood and lacked.

The NDP. almost like some slow motion suicide, mimicked the catastrophic campaigns of the Ontario NDP, Olivia Chow and others. They also massively underestimated Trudeau, as did everyone else.

Like moths to the flame they began from seeming positions of advantage and used those to justify right wing narratives as a path to power.

As if this was the UK in 1997 without any notion that Tony Blair was, in the end, a disaster,

The fact is, it was obvious that the Trudeau "left shift" would work. Many of us called it from day one. No one cares about deficits anymore. No one regards balanced budgets as a priority.

Only the NDP and its partisans failed to see the ground had shifted. The terrain has changed.

The illusion of Official Opposition  became the bitter pill of capitulation to political "realism".

The NDP has been wiped out in a number of regions. Annihilated in Atlantic Canada. Decimated in Quebec. Literally obliterated in Ontario and Toronto which was a must to win to power. It failed to make much ground in the west where its alleged fiscal "conservatism" was supposed to deliver results.

At what point do we acknowledge the "Third Way" is a bankrupt place to campaign from?

Could the NDP have won? Yes. It could, had it had a better brand and set of strategists, have supplanted the Liberals once and for all as the new flavour of bourgeois opposition.

Given that it has not, maybe it is time to turn back to where the NDP came from. Back before Tom Mulcair and Jack Layton.

At this point it would seem there would be little to lose.

And the NDP might actually mean something politically again.

Editor's Note: The piece has been changed from an earlier version that stated that the NDP had been devastated in the west to state instead that it failed to make much ground in the west.

Posted by Michael Laxer at 2:04 AM