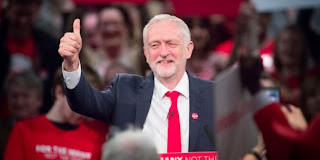 In what can only be read as a rather defensive and bizarre apologia for the NDP's election strategy catastrophe in 2015, former National Director of the NDP Karl Bélanger has penned an op-ed (in the Toronto Sun no less!) called "NDP needs to remember that Jeremy Corbyn and Bernie Sanders lost". It is the saddest attempt that I have seen to date from a Canadian 'progressive' to downplay and minimize exactly what it is that Corbyn recently accomplished in the UK.

By doing so he presumably seeks to caution against attempts to change course from the more centrist NDP campaigns run by Layton (whose senior press secretary he was) and then Mulcair (for whom he worked as Principal Secretary). He also frames the success (insofar as he is willing to grant it) of Corbyn and Sanders as being primarily about "millennials" with seemingly no sense that was about a lot more than that including more importantly the return of left-wing class politics and the simmering of a revolt against grotesque inequality and the devastating consequences of a generation of neo-liberal austerity.

Bélanger's analysis is deeply flawed in a number of ways.

First, the 'losing' campaign of Sanders is not actually analogous to the UK election or to the next general one in Canada for the simple reason that what he didn't win was a rather unfair and corrupted nomination process against a party establishment that actively worked to stop him. He did not 'lose' the presidential election as he was not given the chance to. The centrist, mainstream candidate Hillary Clinton did that! Whether he would have won the general election or not we will never know but to say Sanders 'lost' in the same way Layton or Corbyn did is simply wrong.

Trying, one assumes, to seem fair, Bélanger draws an analogy between Layton in 2011 and Corbyn, noting "Despite the spin and euphoria created by the Orange Wave, the stark reality was that Stephen Harper won the election while the NDP lost."

While this is true (though, ironically, you would never have thought it listening to Layton on election night that year or to NDP partisans for the next four) it also fails to continue with what then happened next with the NDP's centrist approach which was the relegation of that party back to third party status, the loss of over 50 seats, nearly 11% of the popular vote, and a Liberal majority! The story did not stop in 2011 for the NDP. And I have little doubt that had the NDP instead managed to hold Harper to a minority while picking up seats and increasing the popular vote as Labour did that Bélanger -- and other NDP insiders or columnists -- would have been beside himself in his triumphalism.

(One might also note the result in 2011 led Canada from a Conservative minority to a Conservative majority government while in the UK Corbyn's Labour did exactly the opposite.)

As to the notion that "in Canada, it is Justin Trudeau that is still the millennials’ champion" even if true it is only true as the NDP has ceded to him this ground. That is actually an argument for a new approach and a shift, not against one.

In Canada the centrist approach was supposed to deliver the goods but did not.

The same cannot at all be said of Corbyn and Labour's left shift. As Lee Brown noted, "Jeremy Corbyn just made history with the greatest increase in Labour’s vote share since 1945."  Never mind that, as Jonathan Cook noted (among other things) in his must read "The facts proving Corbyn’s election triumph":


In short, Corbyn has proved himself the most popular Labour leader with the electorate in more than 40 years, apart from Blair’s landslide victory in 1997. But let’s recall the price Blair paid for that very small margin of improvement over Corbyn’s vote. Behind the scenes, he sold Labour’s soul to the City, the corporations and their lobbyists. That Faustian pact secured Blair the backing of most of the media, including Rupert Murdoch’s stable of papers and TV channel. The corporations mobilised their entire propaganda machine to get Blair into power. And yet he managed it with only 2 percentage points more than Corbyn, who had that same propaganda machine railing against him.
Also, unlike Corbyn, Blair did not have to endure a large section of his own party trying to destroy him from within.
That is the true mark of Corbyn’s achievement.
Another point. Blair’s 1997 landslide was the peak of his success. As Labour members realised what he had done to achieve victory, support ebbed away relentlessly until he was forced to step down and hand over a profoundly damaged party to Gordon Brown.

But perhaps more importantly, and what lies at the heart of the push back from those like Bélanger in my opinion, is that Corbyn has shown definitively that it is not necessary to bury principles to seriously vie for power for the left. He has relegated the horrible bankruptcy of that approach to the proverbial dustbin of history. As former Corbyn critic Owen Jones put it:


Blairism, New Labour, whatever you want to call it, is dead. It owed its hegemony to, frankly, despair: the idea that socialist policies were electoral poison, and offering them to the British people would invite only landslide Tory victories. The idea that technocratic centrism in this election would have mobilised voters as Corbyn’s Labour did is for the birds. No, Labour didn’t win, but it won its biggest increase in vote share since Clement Attlee in 1945 and is far closer to government than it was, despite being hobbled with disadvantages such as the loss of Scotland before Corbyn assumed Labour’s leadership. The idea, therefore, that centrism is the only possible route for electoral victory is buried.

That is his even greater triumph. Corbyn has shifted the discourse and not just in the UK.

And this is what the centrists wanting to maintain their ideological hegemony in the NDP really cannot stand.

See also: Corbyn's triumph is a triumph for the socialist left

See also: What victories? -- Why the NDP's right is wrong...and DiNovo has a point!
Posted by Michael Laxer at 11:20 AM