Against the backdrop of one of the most significant labour disputes in Saskatchewan  -- and even arguably Canada as a whole -- in many years the provincial NDP has let it be known that to the great rallying cry "which side are you on" their answer to workers is, for now, no one's.

The ongoing Co-op refinery lockout has seen heightened union militancy due to efforts by the company to break the union by using replacement workers. This has led to union roadblocks, arrests of senior union leaders, threats by the police and courts and a refreshing stance of unity by many national union leaders.

While it is both perfectly obvious that this entire confrontation would have been avoided if the province had anti-scab legislation -- and while such legislation is a basic and fundamental demand of the union movement that you would think would be reflected by Canada's alleged party of labour, the NDP -- the provincial NDP is refusing to commit to such legislation in the unlikely event it were to ever win power.

David Forbes, labour critic for the Saskatchewan NDP "said the NDP will discuss any proposals with “both sides,” presumably meaning employers and labour. He expects the current lockout at the refinery will provide “a lot of lessons learned.”"

With all due respect, Mr. Forbes, those lessons were learned a very long time ago and that comment is bullshit. It is yet another in the endless examples of the NDP seeking to claim it will be a fair and unbiased manager of the capitalist state. Forbes even used the disgraceful and reactionary term "stakeholders" when talking about workers and the bosses as if there is somehow two sides to labour disputes like the Co-op one or something akin to equality in power and influence between unions and corporations.

Ontario anti-poverty activist John Clarke called out the Saskatchewan NDP on Twitter for this and actually got a response from its leader. 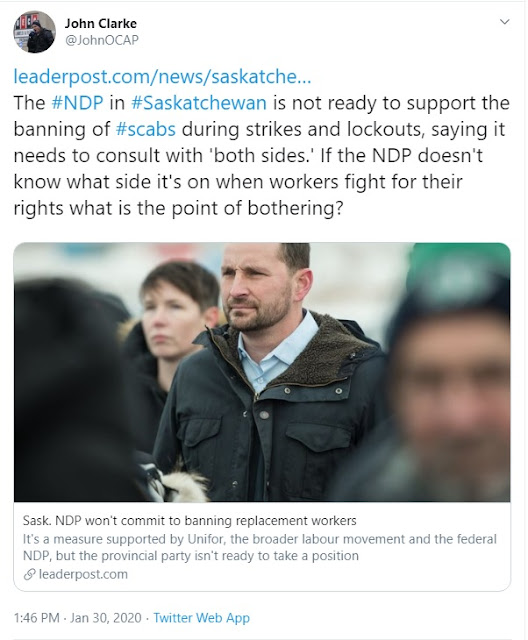 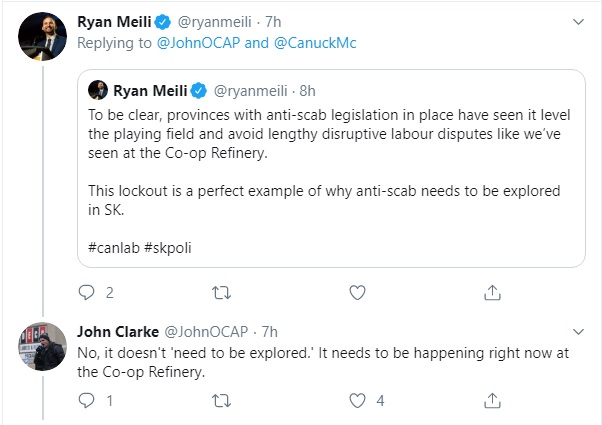 If it has been seen to "level the playing field" and "avoid lengthy disruptive labour disputes" then why does it need to be "explored". Why not simply advocate for it as, obviously, it "levels the playing field" in favour of workers and unions.

But that is exactly what the NDP is worried about. Simply advocating for this might make the party appear to be too pro-worker or as on the side of workers and they can't have that.

Corporate and fossil fuel industry quisling Rachel Notley showed this old and tired rule from the NDP playbook when on her very first day in "power" in Alberta she said ""I'm going to be making phone calls today to leaders within the energy industry to begin those conversations. They can count on us to work collaboratively with them."

Of course, industry is totally uninterested in working collaboratively with unions, workers or the NDP, but why not just sell the farm in advance? It is a time-honoured NDP tradition.

As I have noted before "At times it is like the so many New Democrats and their supporters who love to share the 'Mouseland' parable that Tommy Douglas made famous have entirely missed its point. It is not going to be a government by and for the mice if it wants to find "common cause" with the cats.'

When it comes to the struggle between corporations that have not had as much power as they do now for decades and workers who have not had so little, if you say you want to talk to "all stakeholders" and "both sides" you are on the side of the bosses.

Posted by Michael Laxer at 7:04 PM