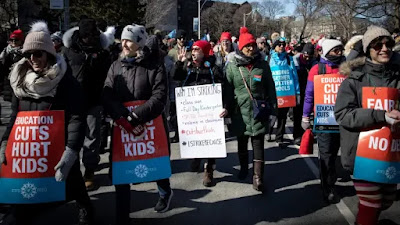 To Premier Ford and Minister Lecce,

My name is Aidan Monis. I'm a 27 year-old secondary school teacher in Toronto District School Board. I'm currently teaching at an Adult Day School in Scarborough. I'm writing to you today to add my voice, such as it is, to the current often-confusing fray around your government's plans for Ontario's education system. I will leave the cost-benefit analysis, hard numbers, and political manueovering to other, more qualified individuals. Instead, if you've got the time, I'd like to tell you a story.

I knew a boy once (who I'll call Robert) who was having an extraordinarily hard time in school. He often felt left out, ignored, uncared for, disaffected. Now, as anyone who has read "Catcher In The Rye" can tell you, this is not exactly unique to Robert. Having been a teenager not so long ago, I can certainly attest to the many growing pains of adolescence. Once he hit Grade 11, Robert started to perform more and more poorly in school. As his grades dropped, his parents and teachers began to take more of an interest in Robert. You know the drill - a teenager making comments about how "nothing I do at school even matters," parents wondering where they went wrong, the whole nine yards. As the year went on, Robert withdrew further and further into himself. It's sad to say, but thoughts of self-harm even began to enter his mind, which had never been there before. This is an all-too-common mindset for many of our beloved young people, as you surely know.

Enter Mr. F., a young, unconventional music teacher. Robert had heard about Mr. F.'s "weird" music classes in grade 9 and 10, and while he was confused at some of the stories he'd heard, he basically felt "eh, why not?" He was already turned off of school, so yet another pointless class didn't seem like such a big deal. Thankfully, Robert had never been more wrong in his life. Every day in Mr. F.'s music class felt like paradise! Here was a man who played with great Canadian musicians, who loved a lot of the same music that his students did, who helped those same students find and explore their own passions! Robert, who to this point had struggled with intense self-loathing and fear, began to express himself. It was a sight to behold! This quiet kid, who nobody paid much attention to, who had never really asserted himself at all, had something to say musically! And he began to help others do the same.

Now, it wasn't anything that Mr. F. did for Robert, specifically, that really made the difference here. Rather, it was Mr. F.'s mode of *being* in the classroom. I've talked to many students of this teacher, and have heard DOZENS of stories similar to Robert's. Mr. F. is so kind, so open-minded, so compassionate, such a good listener! He's such a positive role model (especially for disaffected young men like Robert)! And above all, he helps his students believe in themselves.

As most readers have likely figured out by now, that boy, Robert? He's me.

It would be impossible to overstate the influence of Mr. F. on my personal, musical and professional growth. I must admit that I don't know if I'd even be alive today if I hadn't met him. Like any great teacher, Mr. F. demures endlessly when I lavish praise on him like this. At the very least, I would never have found my life's true calling, which is working with the passionate, intelligent, (sometimes slightly frustrating!) young people who walk through the halls of our high schools every day. The ones from whom I learn so much more than I could ever teach. The ones who, when their parents send them to my classroom, become, for just a little while, "my kids."

The specifics of the many teachers like Mr. F. change - different ages, subjects, backgrounds, politics, and life experiences. What does NOT change, however, is an uncompromising belief in the absolute best in our students. I have no illusions that every single student in Mr. F.'s music class responded to him the way that I did. But my hope, and my sincere belief, is that all students find at least one or two teachers to truly bond and grow with. Maybe it's the biology teacher, or drama, or business, or auto shop. Maybe it's all of them! But please remember, Minister Lecce and Premier Ford, that every teacher in this province is somebody's Mr. F.

Aidan is a 27 year-old music teacher and musician from Toronto. He likes jazz, beer and social justice.

Posted by Michael Laxer at 7:05 PM