Panic buying and hoarding are a function of capitalism 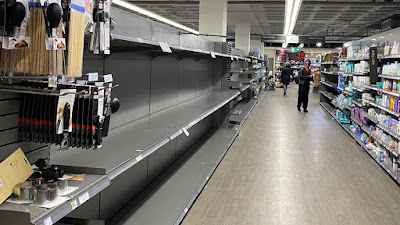 As the capitalist coronavirus crisis unfolds and people across North America (and around the world) face quarantine for two weeks or more coupled with the prospect of lost income, we have seen scenes of what has been described as "panic buying" as well as instances of hoarding. People are stalking up on food -- especially non-perishables like canned goods and pasta -- as well as, most famously, on items like toilet paper.

This leads inevitably to mocking and making fun of this. I have seen panic buying described by people online as "insanity", "idiocy", "stupidity", etc. and many condescending and mocking memes or comments can be found across social media.

And that people feel such panic in such great numbers is idiocy: the idiocy of a cruel and sadistic economic system where working people know that while the government will be (and already has been) there for the banks and major corporations there is no guarantee it will be there for them.

Working people realizing that they may face a long time isolated at home with a few kids, parents, family or even if only on their own -- and knowing that some or all of those people may be sick during this -- are really not left with any alternative. What are they supposed to do?

Many are confronted with the possibility of a greatly reduced income or, in some cases, no  income. They will still have bills, rent and mortgages to pay despite this. We know that millions and millions of North Americans are just 2 to 4 paychecks away from facing bankruptcy and even homelessness. Stocking up on goods may be the difference between an already stressful and unpleasant situation, being at least marginally bearable or being a true, deep nightmare.

People are scared and they have reason to be.

Are there cases of this being carried way too far? Of course there are. The seemingly over-the-top raiding of toilet paper shelves would spring to mind for most. But this too is based on a rational fear. Being in isolation for weeks with no toilet paper is obviously survivable but would be unpleasant. When people hear that toilet paper is flying off the shelves they respond by trying to get some before it is gone.

Some will take this to ridiculous lengths and buy up enough to last for many weeks or months and this is, without question, anti-social and wrong. But toilet paper does not "go bad" and, more importantly, no one, with a few rare, though increasing, exceptions of merchants stepping up, is stopping them.

Which brings us to hoarding. A fraction of people will carry purchasing for quarantine so far that it amounts to hoarding. There will also be some examples of hoarding for nefarious purposes. Most of us have heard the stories of speculators buying up stocks of hand sanitizer or disinfectant wipes and then trying to resell them for a profit online. This has led some online forums like Amazon to ban this after being shamed by the public and politicians.

There are also cases of price gouging and at least anecdotal evidence of major retailers raising prices a dime here or 50 cents there, etc. on goods in high demand at the moment.

And all this was not only totally predictable it is a function of the kind of society we live in and the kind of capitalism that our politicians and elites have constructed.

Price gouging, for example, has nothing to do with people buying for the crisis at all. It is businesses taking advantage of the situation and both not putting everything they have on the shelf and hiking prices.

Panic buying is happening because of the reasons we looked at above.

And hoarding is happening because we are allowing it to.

Let us be clear, it is not up to individuals faced with quarantine, lost wages and shortages to somehow self-regulate, though most of us actually will. It is to the government to regulate businesses, prices and buying. They should have already done so and should start now.

The solution to this is truly simple and has been done countless times. In fact, when retailers have sales they do it themselves regularly.

The government should have intervened right from the beginning when it became clear this was a serious crisis and frozen all prices while limiting the purchases of certain essential or scarce items to a given number per household per visit to a retailer. This could be modified over time based on increasing or decreasing scarcity.

Doing this would have immediately ended almost all hoarding and price gouging and would have mitigated panic buying as people would have known that certain essentials would be available.

But our governments did not do this, despite how obvious it is, because that would be the kind of intervention in the market that governments of all stripes are ideologically opposed to now.

Some interventions they are fine with, such as billions in subsidies to build pipelines or hockey arenas, over a trillion to infuse into the financial sector as the United States just did, or the countless everyday government handouts to the wealthy and business class.

So panic buying is not something to be mocked and it is not funny. It is actually the smart thing to do given the society we live in.

It is also inevitable, along with price gouging and hoarding, for one reason and one reason only. Capitalism.
Posted by Michael Laxer at 8:16 AM

Email ThisBlogThis!Share to TwitterShare to FacebookShare to Pinterest
Labels: coronavirus