Dear Mr. Mulcair: Fighting income inequality is not just an email petition away 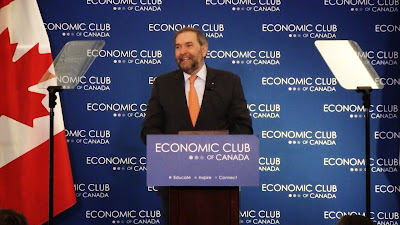 A few days ago the NDP sent out an email to those who subscribe to their party email list that was ostensibly from its leader Tom Mulcair and that had as its title "Tackling income inequality".

Our NDP team is back in Ottawa this week and ready to get to work for you.
Front and centre is the issue of income inequality – one of the most glaring injustices in our society. It’s not enough to say that everyone has the same chance in a game that's rigged against the most vulnerable.
That does nothing to help a child who lives in an overcrowded, unheated apartment and goes to school cold and hungry in the morning. Or the pensioner whose income is slipping away.
In 2015, Canadian banks earned a record $35 billion in profits and handed out $12.5 billion in bonuses. Meanwhile, those same banks eliminated 4,600 good-paying Canadian jobs last year alone.


After asking email recipients to sign a petition demanding "real action" on the issue,  the email goes on to say "I refuse to accept that 1.1 million Canadian children and half a million Canadian seniors live in poverty or that anyone working fulltime lives below the poverty line."

Setting aside for a moment the fact that we really should not accept that anyone lives below the poverty line, whether they work full-time or not, this all sounds very stirring and seems to take a strong stance for living wages and to commit to a political agenda that would confront the staggering and almost Gilded Age levels of grotesque income inequality that exists in Canada and the rest of the world today.

It is, indeed, one of the most fundamental issues of our time.

The tone also seems a refreshing shift rhetorically leftward from a leader who ran a disastrous election campaign that was not at all left, rhetorically or otherwise.

So how is the NDP going to fight income inequality?

On this front the email is, to say the least, rather vague. Or, more accurately, does not present any program or vision to do so at all.

But, after briefly going on again about "record profits" and Bay St. bonuses, according to the petition webpage:

Tom Mulcair understands that government must help tackle income inequality—starting with action to ensure banks and profitable corporations are paying their fair share.

To the barricades! The NDP will tackle income inequality by making corporations pay "their fair share".

Sounds great, other than the fact that this will do nothing, even as a "start", to tackle income inequality. As I have pointed out at some length in the past, income inequality is driven by disparities in individual incomes, not by corporate profits -- hence why you will find that the CEOs of even unprofitable large corporations still make far, far, far more money than the vast majority of Canadians do.

This is especially true when the NDP both during the election and since were proposing what might at best be described as very modest corporate tax increases, much of the revenue generated by which would have been offset by a variety of boutique tax cuts, including a fundamentally misguided "small business" tax cut which would have actually fueled the growth of income inequality.

While higher corporate taxes could be used, in theory, to help to fund re-distributive social or anti-poverty programs -- like universal Pharmacare or a large-scale national social housing program as just two examples -- the NDP was not proposing anything like these and would not have been able even remotely to have funded them under their tax plan.

This reality is only amplified by the fact that Mulcair made a ludicrous balanced budget pledge that would have made any type of broad re-distributive agenda totally impossible in the present economic conditions.

But, more to the point, the only way that the government -- outside of a campaign to socialize and/or nationalize large parts of the economy -- can actually do anything meaningful or serious to confront income inequality is through raising, and raising rather dramatically, personal income taxes, and this is something that Mulcair repeatedly said he was unwilling to do before and during the election -- even on the very wealthiest Canadians.

Given all of this, the outward left shift in tone is all style and no substance whatsoever.

Taking a page out of Andrea Horwath's very successful strategy to preserve her leadership in Ontario after the ONDP's unexpectedly poor showing in the 2014 provincial election -- which saw them also attempt to run a very centrist and even rhetorically right-wing campaign --Tom Mulcair's sudden commitment to sound like half a Bernie Sanders or one-quarter of a Jeremy Corbyn is little more than throwing a bone to restive party members still under the illusion that they are actually in a social democratic party.

Don't be fooled by this transparent ploy in the lead-up to the federal convention leadership approval vote. This is still the same Tom Mulcair, and no internet petition or programmatically bankrupt rhetorical broad stroke is going to do anything to help fight income inequality in Canada at all.

See also: The Toronto Sun and National Post think Tom Mulcair should stay on? No way!

See also: Just forget about a Canadian Corbyn -- How a lackluster left in Canada gets the Mulcair it deserves
Posted by Michael Laxer at 9:36 AM