Statutory rape is rape -- In every single case 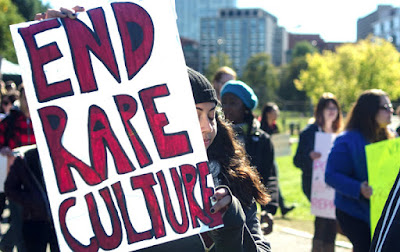 With the death of David Bowie the depressingly long road that lies ahead in the battle to end the narratives that enable rape culture are becoming abundantly clear.

Largely lost among the general mainstream celebration of Bowie's considerable accomplishments as an artist and his impact on popular culture are a small group of writers who have wanted to remind people of Bowie's sexual actions towards and involving young teenagers -- actions that are both legally and morally rape.

They have done so in pieces like David Bowie and believing children., David Bowie was a musical genius. He was also involved in child sexual exploitation. and Remembering Bowie: The Man, The Legend, The Sexual Abuser among others.

What has been shocking and distressing is the countless comments one encounters in response to these articles -- even from men and women who self-describe as progressive or feminist -- saying any number of variations of "they were groupies and they consented to the sex so it was not rape" or "it was the 70's" or "it was a different context", etc.

In the specific case of David Bowie, as a blogger put it in the piece David Bowie: Musical Genius, Gender-Bending Icon, Alleged Perpetrator of Sexual Violence:


He also is said to have had sex with (read: raped) girls young enough to be in junior high school, and at least one rape allegation against him. He is, like so many of your faves, problematic. It is not uncommon or unheard of for older men with fame and power to use that to exploit young girls hungry for love and acceptance. It’s also not uncommon for people to sweep this reality under the rug because they don’t want to admit that someone they admire is capable of doing these things

But David Bowie did this, if Lori Maddox is to believed (and i choose to believe her). He “took Lori Maddox’s virginity” — as she puts it— when she was just 14 years old (I have also heard this number be 13 or 15. Either way, nothing changes). Regardless of how she views the encounter (and, to her, it was consensual and she remembers it fondly), the fact of the matter is that legally and emotionally, a 14-year-old girl cannot consent to an adult man, particularly an adult man with rock star status who provides alcohol and drugs. That same night, according to Maddox, he had a threesome with 14-year-old Maddox and 15-year-old Sable Starr. No matter how you spin it — and I want to be clear that these women are entitled to their own personal narratives — even if they could not and did not know better, he should have. Regardless of what the details of the story are, statutory rape is illegal and it was illegal in 1970, too.

This is the critical point that bears repeating: "the fact of the matter is that legally and emotionally, a 14-year-old girl cannot consent to an adult man, particularly an adult man with rock star status who provides alcohol and drugs."

And this is true irrespective of the "context", the decade and, as she makes clear, whether the young people in question "consented".

In the powerful and moving piece The Myth of the Teenage Temptress: Or Why A Young Girl Can Not Consent to Sex With An Adult Man, a woman wrote of her sexual exploitation by older men when she was a teen, to which she nominally "consented":

And so I created Prodigy chat rooms with names like "13yo girl home alone" and spent hours chatting and having phone sex with the men who would find me there. I "dated" men in their 20s and 30s that I met at the movie theater, online or hanging around local college town with my other underage girlfriends. I pursued these relationships with with Lolita-like abandon. The terrifying thing is how few adult men ever said no.

I was not coerced. I consented to all these sexual encounters in the basest sense of the world. But I was making choices that I wasn't emotionally equipped to make. Legally, that's why statutory rape laws exist. Because like an intoxicated person, an underage person is not truly capable of informed consent...

...I spent the next decade of my life wrestling with demons borne partly of sexual trauma. I became addicted to drugs, risky sex, and alcohol. I still struggle to learn that there are better ways to get attention than with my body, that my sexuality isn't the only thing that makes me worthy of love and attention.

Still, I made it out of my teen years alive; Cherice Morales wasn't so lucky.

What I needed, and what she needed, were strong male role models in my life who knew how the fuck to say "No thanks" to a little girl's come-ons. Because it doesn't matter if a young girl is saying yes, it's an adult man's job to say no.

This is not simply about David Bowie and when people accept the notion that young teens or children can give consent they reinforce this terrible and violent rape justifying "myth of the teenage temptress" and empower and embolden those who enage in or excuse such conduct in their self-justifications and victim blaming. They do this as well when they simply refuse -- as was the case with so many and Woody Allen -- to believe the children's or young people's stories at all.

If it was ok for David Bowie, how was it wrong in this-or-that context where there was also supposed "consent" on the part of the child?

Make no mistake about how dangerous and destructive these ideas are and excusing such conduct is. When we undermine efforts to stop the lies and myths that perpetuate rape culture we ensure that sexual assault and abuse of children and young teens will, in many cases, continue to be seen not as rape but as some minor transgression that a (in the vast majority of cases) man was somehow enticed into.

On a broader level these excuses remind us why it really should be no surprise how the Bill Cosby and Jian Ghomeshi "extremes" of famous male rapists who were able to victimize women for such a very long time happened.

When we make excuses for or simply ignore the vile behaviour of so many other well-known celebrity or sports figure male serial abusers, spousal abusers, child sexual exploiters and rapists on every step of the vicious ladder that leads right up to them, we ensure that they will happen again.

They happen precisely because so many of us continue to think this way and believe these myths.

We must stop and counter all attempts to claim that there was a context in which it was acceptable for men like David Bowie, and many other rock stars at the time and after, to sexually exploit and abuse children or, in his case, young teenagers.

Because what you are saying if you believe this is that there are some cases and situations where it is permissible, understandable or forgivable for an adult to have had sexual intercourse or sexual contact with children, pre-teens and young teenagers and it is not.

It is wrong morally and legally.

It is never acceptable, understandable or forgivable and it is always rape.

In every single case.
Posted by Michael Laxer at 1:36 PM