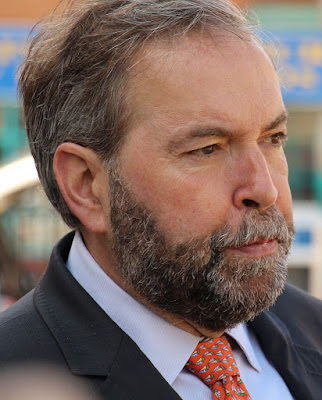 This has been an interesting week in the history of Canadian social democracy.


After Mulcair decided to double-down on comments he made praising Margaret Thatcher last week, we began this week with NDP advisers musing to Lawrence Martin in Canada's business tribune, the Globe and Mail, about trying to outflank the Harper Tories from the militarist side on defense spending by stating that they may yet be going to propose a whole lot more of it! As Martin relates it:

“You might well imagine,” an adviser to Thomas Mulcair was telling me, “Tom coming out in September and saying Harper has driven down defence spending to one per cent of GDP. We’re going to raise it to 1.2 per cent. We have a military that’s being allowed to rust out and we’re going to fix it.”
Another adviser cautioned the level of support might not be that high – a 20 per cent increase – but significant enough to show Canadians the NDP is by no means soft on defence.

Then, despite the fact that one would imagine that debating women's issues and the polices and ideas that he felt would help to redress the harsh realities of systemic discrimination and oppression that millions of Canadian women face everyday, would be something that the NDP leader would be inclined to do, he continued to insist that he would not participate in what would have been the first leader's debate centered around these issues since 1984 unless Stephen Harper did as well.

In the end this led to the debate being cancelled and reformatted into a non-debate -- becoming instead a series of "interviews" with four of the leaders individually. This meant that, regardless of supposed intent, Harper and Mulcair had managed to avoid debating women's issues with the only woman who leads a federal party, Elizabeth May.

What is rather telling, however, as Yves Engler pointed out in rabble.ca, is who, instead of the groups that were organizing the women's debates, these same leaders were willing to debate each other at the behest of:


While about 50,000 people and 175 organizations supported Up for Debate's call for an election debate focused on women's issues, it won't happen because Stephen Harper refused to participate and NDP leader Tom Mulcair is unwilling to appear if the prime minister is not there to bash.

But the same politicians have agreed to a September 28 debate on foreign policy sponsored by an organization named after and financed by one of Canada's richest and most right-wing capitalists.

Through his Aurea Foundation, Peter Munk, the founder of Barrick Gold, established Munk Debates in 2008. Peter's son Anthony Munk, a close friends of Harper's former chief of staff Nigel Wright, is part of the four-person committee overseeing the debate series.

In the wake of this it was further discovered that the NDP had removed the membership's policy resolutions from the party website on the grounds that these policies were not the platform!

Now, of course, this is true. The NDP leadership has demonstrated that they could not really care less about member "policy" resolutions and have done so to such an extent that, as I have noted before, I am not even sure why they bother to hold the policy conventions anymore at all. The Ontario provincial party actually tried to deny the member policies even existed to the media in the lead-up to the last provincial election.

But by actually taking the step of removing them from the party website, after having finally agreed to put them there a couple of years ago, they are literally thumbing their nose at their own base and members during an election campaign. It seems it embarrasses the leadership that they have a membership that still sometimes thinks they are in a left-wing party and passes pesky leftist resolutions on occasion as a result.

Would not want those democratically arrived at polices to fall into the wrong hands!

Finally we come to what is perhaps the most disconcerting development of all -- Mulcair's ironclad promise that he will deliver as his first budget a balanced budget and his attempts to paint Trudeau's short-term deficit spending plan as somehow economically irresponsible in contrast to this -- when it is actually exactly the opposite that is true.

Trudeau has "said he’ll run deficits of up to $10-billion a year for three years in order to allow for a multibillion-dollar increase in spending on infrastructure, raising it from $5.1-billion to $10.2-billion next year" in order to create jobs and help the economy as it appears to be heading into a downturn.

This is, in relative terms, actually a rather good idea and is basic Keynesian-progressive economics that, in any other era, would have hardly been seen as radical or at all out-of-place in a centre-left platform -- terrain the NDP continues to claim is exclusively theirs. It is, of course, perfectly reasonable to question if Trudeau and the Liberals will actually carry through on this given their past history. After having been elected on a very progressive platform in 1993, the Liberals shifted very far to the right in the 1995 budget and, as  Michal Rozworski noted, this was really when "Canada's harsh 'austerity' policies started".

It is, without any doubt, deeply and profoundly cynical and hypocritical for Trudeau to be campaigning, as he has been, on this new platform with Paul Martin given Martin's vicious austerity record as Finance Minister!

Mulcair however, as he has done before, and as when he mocked Bob Rae's entirely correct decision to run deficits as Ontario NDP Premier in the early 90's instead of engaging in the deep cuts that were to come under Mike Harris, has made a great show of maintaining that he will, absolutely, positively, no matter what, balance the books and continues to do this after Trudeau's announcement -- essentially attacking Trudeau on this front from the right.

Mulcair rejected the very idea of even Trudeau's type of mild deficit spending and stated:


“Governing is about priorities and we’ve watched the Conservatives run up eight deficits in a row, the Liberals are now telling us that they want to run several years of deficits,” Mulcair said. “I’m tired of watching governments put that debt on the back of future generations.”

He and his new finance front man, Andrew Thomson, also went on to tell TVO host Steve Paikin that progressive economists like Paul Krugman were "wrong" when they said that "with interest rates at historic lows, it's a perfect time to deficit spend to catch up for decades of under investment in infrastructure." Mulcair cast it as "immoral" to pass along debt to future generations, as if short-term deficit spending of necessity means this -- which it does not.

One might have asked him if passing along decrepit infrastructure and decaying communities was, by contrast, moral?

As the Ottawa Citizen noted "It’s all made for a dizzying U-turn on the Canadian political spectrum".

It is deeply puzzling (or perhaps, given his past praising of Thatcher, it is really not) trying understand Mulcair's fixation on this, other than as a deliberate pandering to Bay St. narratives for what he and his advisers see as necessary to reassure whatever group of voters they think it will reassure. It was, after all, only a few short years ago in 2008 that his predecessor Jack Layton signed a coalition agreement with the Liberals  that was in no small part centered on the need for a vigorous government stimulus spending  package that it was acknowledged would lead to some short-term deficits! In fact, the Layton-Dion plan would undoubtedly have led to deficits as high, and likely higher, than those Harper has run.

As I have noted previously, while it is important for left governments to avoid over-reliance on deficits and borrowing within a capitalist context, promising balanced budgets during a period when the economy is stalling and appears to be about to decline, is both bad for the economy and virtually guarantees some version of austerity. It also capitulates to the false notion that alleged fiscal prudence should be placed ahead of programs and government intervention to create jobs and infrastructure.

Further, as Mulcair has ruled out any personal tax increases on anyone, even the wealthiest Canadians, and as it has become increasingly clear that the planned NDP corporate tax hikes will not be particularly significant nor will they result in a dramatic increase in revenue, it is becoming harder-and harder to see how Mulcair will be able to undertake any serious initiatives or follow through on even the very meager promised ones fully with these entirely self-imposed budgetary and taxation restrictions.

Never mind that he has pledged a quarter-billion dollars to the police and, as indicated above, may be about to announce a large military spending increase within these confines for himself that have been set.

The first casualty has already occurred -- with Mulcair now saying that his promise of last year that he would reverse the Conservative health transfer cuts will likely have to be delayed.

When politicians begin to make retreats on their promises even before being elected, it is not a very good sign.

When the leader of a social democratic party attacks Keynesian and stimulus economics from the right it does not augur well on any front.