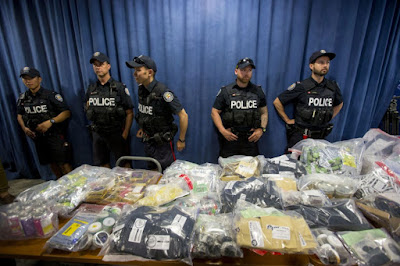 Sadly, as predicted in this column a couple of weeks ago, a massive and heavy-handed crackdown on marijuana storefront dispensaries occurred in Toronto on May 26th.

But while I suspected it would be directed by by-law enforcement officers, instead it was a police crackdown complete with raids, unnecessary arrests of store workers and, something that has become a bit of a Toronto Police regular operating procedure, a post-crackdown press conference with a bunch of totally phony "evidence" on display!

Good to know that they are stepping up to their usual standards of transparency and honesty.

While the police are claiming they were simply enforcing the law (which everyone knows is about to be changed) it is totally obvious that these raids were conducted after pressure from City Hall given that they occurred such a short time after Mayor Tory's public histrionics about the shops.

They were ludicrously over-the-top given that by-law efforts to stem the explosive growth of the new and unregulated shops were already bearing fruit.

This was a public relations move, not a law enforcement one.

Despite the absurd Miami Vice style nature of the whole police action, Toronto City Council's alleged progressives have had little to say critical of the police.

This is rather typical of what passes for the establishment "left" in the city.

Di Ciano helped to spearhead a vote by Toronto's planning and growth committee that will allow residential development to occur on Judson Ave. in Etobicoke right next to an exceptionally busy rail corridor.  The vote passed 4-2.

The interesting part is that the vote went against the recommendations of Toronto city planners, Metrolinx planners and local community groups. The vote is also greatly to the benefit of developer Dunpar -- a company with which CBC has discovered that Di Ciano has a long history of ties that the CBC called both personal and professional.

How could anyone possibly think that this relationship could have a played a role in...you know...overruling the findings of the actual experts because, of course,  Di Ciano apparently knows best?

Putting the Brakes on Democratic Representation

The current council has already shot down the idea of ranked ballots in Toronto, and now the Mayor has made it clear that, despite the recommendations of the city's own consultants and despite the fact the city has grown substantially in population since the present wards were set and desperately needs to reflect this in its ward boundaries and council size, he wants no more politicians!

While this pseudo-populist rallying cry is not exactly a hard-sell generally, when combined with the city's unwillingness to make ward boundaries everywhere reflect actual population instead of clinging to the boundaries of cities that no longer exist, in practice it means uneven representation and growing under-representation.

The boundaries and council size now tend to favour the centre and right politically, so this should all really come as no surprise,

So the Mayor's Executive Committee has sent the recommendations back presumably in the hope that the experts will return with new ones based not on evidence and facts, but rather based on what the Mayor wants to hear!

While I often disagree with Toronto Star municipal columnist Royson James, he makes a very important point about the terrible consequences of the unwillingness of Toronto politicians to deal with developing serious and fair revenue streams and taxation methods when he writes:


Was it fair to raise more money from TTC fare hikes and ridership growth ($303 million) than from property taxes ($237 million) over the past six years, when TTC riders tend to be poorer and in greater need of support from the entire city?

It was, of course, not fair at all.

The excellent column in which this appeared is available here.

Mayor Tory "is calling the cycling proposal coming to city council "historic,"". In spite of the fact that:


The original staff report also recommended that the city look more closely at putting bike lanes on eight major arterial roads, including Yonge Street and Kingston Road — something cycling advocates have been requesting for years. That recommendation got stripped out of the plan a couple of weeks ago, when it came to the city's Public Works and Infrastructure Committee.

Of course it did.

The Mayor is also heralding the addition of $16 million in annual funding. Exciting. Real dedication to environmentalism and cycling from a city that is going to spend close to $800 million to maintain the eastern part of the Gardiner Expressway for a relatively tiny number of drivers!

"Toronto ban on hookah lounges challenged in court."  -- I suspect the city is going to have a hard time winning this one.

"Justin Trudeau open to exploring ‘next steps’ in Toronto’s potential Expo 2025 bid" -- Why? Please no.

"‘Waterfront reset’ examines way to extend transit to new neighbourhoods along the lakeshore" -- This is something the city needs to fast track, especially given the explosive growth of high-rise condos along the proposed route.

Since our last installment there have been some developments in the Ward 2 coronation -- sorry, I meant by-election.

Most of the declared candidates have websites up.

The heir-apparent Michael Ford is, unsurprisingly, running on "Keeping Taxes Low" and "Customer Service" in addition to running on the fact that he is, you know, a Ford. Which means he is about 99.99% likely to win this race.

Jeff Canning has a nice enough website and seems to be running on a number of vague generalities about "engagement", "education" and "employment" without saying much of anything.

New Democrat Christopher Strain has a NationBuilder site that has, to date, literally no policies on it at all. Given his rather tenuous connection to Etobicoke, let alone Ward 2, I suppose he is trying to get up to speed.

Pot heads of the world can unite behind Glen Smith.

Three other candidates do not, as yet, have websites up. All candidates are listed on the City of Toronto website.

John Tory pretended to get all down and dirty in an attempt to show-up those darn city bureaucrats who were being all bureaucratic and telling the Toronto Star that doing something or another was not their function in the bureaucracy.

And now to our rant! It is not "bureaucrats" that are the problem...they are all directed, in the end, by politicians!

All this "can-do" horseshit that Tory waxes poetic about requires proper FUNDING for infrastructure and the reason departments try to "pass the buck" is that for quite some time they have been forced to attempt to make do with fewer bucks.

Frankly, if Tory wants to spend his time landscaping that is probably a better use of it than what he generally does as Mayor, but this is the kind of rubbish you see from a right-winger who actually is implementing an austerity agenda and throwing money at the police, but who wants to pretend that the city's myriad of issues could all be dealt with with "a little hard work".

Then pay, and pay well, for the workers.