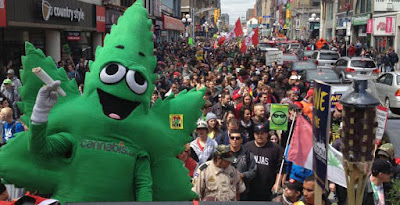 A new feature on the blog, I will be doing a left round-up of civic news and events in Toronto. It will be out every two weeks until the 2018 election comes, at which point it becomes weekly.

As, always, thoughts, feedback, suggestions and ideas will be more than welcome.

It seems everyone with access to pot and money for first and last month's rent is opening up a neighbourhood "medical" marijuana shop in Toronto. Two have sprung up within a five minute walk of my house in the west end neighbourhood of Long Branch.

According to reports this is not an exception but is increasingly the rule citywide. With the pending legalization of pot approaching and with medical marijuana already completely legal, there is a rush to get in on the storefront pot selling action by budding entrepreneurs.

This has led, inevitably, to a hue-and-cry from parts of the media and from Toronto's municipal politicians that, needless to say, has strong elements of "what about the children" alarmist rhetoric to it.

Mayor Tory has called for a crackdown via city regulation on the "alarming" growth of such shops, especially emphasizing the alleged need to keep them away from schools and community centres and so on.

Of course, this is the usual silly logic that is akin to thinking that if only LCBO outlets were in isolated industrial parks kids would never find out about or drink alcohol underage! Kids too young to really get what the shops are are not suddenly going to be asking mom and dad if they too can toke up at recess and in the case of older kids and teens, as with cigarettes and booze, the factors that lead to use or abuse are far more complex than such misguided worries would lead one to believe.

Given the explosive growth in them, the market itself will likely take its course and simply weed a fair number of them out over time on its own.

But all businesses in Toronto are regulated and do have to exist within a municipal licensing and regulatory framework and these should not be any exception.

Due to the nature of the business, I think we can expect a fairly heavy-handed response in the near future.

There have been some positive and, at least to me, unexpected developments on the transit front in Etobicoke Ward 6 lately.

The 501 streetcar route has been split so that the line operates from the Humber Loop west to the Long Branch loop separately from the rest to the east. This has led to a large decrease in delays on the western part of the route (most of which were initiated in Parkdale or downtown) as well as to far fewer short turns at Kipling.

Also, the TTC has introduced an Express Bus that, for no extra fare, goes pretty much directly from Lake Shore and Kipling to the Kipling subway station. This is long overdue as likely 90% of passengers boarding at Lake Shore are going to the subway.

Possibly the most potentially interesting idea, however -- and one that somewhat surprisingly seems to have the support of the local Councillor Mark Grimes -- is the idea of introducing dedicated transit lanes for the bottleneck in the Park Lawn and Lake Shore area.


“Park Lawn-Lake Shore is at a tipping point right now. It’s a major kerfuffle,” he said, adding extra congestion comes from drivers avoiding the Gardiner and taking Lake Shore as they head into town or out of it during rush hours. “We have to give priority to people that are taking public transit.”
The area has a confluence of different public transportation routes, including the 501 streetcar, the 66 Prince Edward bus and the recently added 145 Downtown/Humber Bay Express bus. But Grimes said sharing all the lanes with vehicles makes the situation “unacceptable” for those taking public transit.
“I was there this morning (Tuesday) with TTC CEO Andy Byford, talking to other riders,” he said. “I tell you, I couldn’t count very many cars with more than one passenger. It’s just unfair.”

The pro-transit (and mildly anti-car) rhetoric is refreshing (especially given the source) but this would also be a truly dramatic improvement for transit users and one that should be considered, and would hopefully be a precedent for, many other areas of the city as well.

In fact, in a city the size of Toronto, all of the streetcar lines should be on some type of dedicated lane (at least during business days). More on this in a future blog!

Humorously one of those was originally misidentified by The Toronto Star as Russ Ford, who ran against Mark Grimes in Ward 6 and lost in 2014.

It was actually Christopher Strain, an NDPer who was the "strategist" for Russ Ford's milquetoast say-nothing but sound progressive run. I saw that one up close when I also ran (on a leftist platform) for that council position in 2014. In  the end, despite framing his entire campaign around being the only candidate who could win against Grimes, Ford did not even come close, though with enough of a vote that it was not a disaster like some other much celebrated (at the time) liberal style campaigns.

One can anticipate a similar platitude driven campaign from Strain I would expect. Like Russ Ford, Strain also does not live in the ward he is running in. Unlike Ford, Strain does not even live anywhere close and has no intrinsic connection to the community or to Etobicoke at all.

He made this rather clear in comments to the Sun:


Strain has worked with candidate Russ Ford — no relation to the late incumbent — and ran unsuccessfully for councillor in Ward 6 (Etobicoke-Lakeshore) in 2014.
“That’s my background in Etobicoke,” he said. “That’s why I think I’m qualified to run in Etobicoke.”

That, of course, is no "background" at all and Ward 6 is actually very different in fundamental respects from Ward 2 -- as anyone who knew anything at all about Etobicoke or had spent more than a few weeks there would know. Strain clearly does not.

He does go on to say that voters need a choice, which is always true and worthwhile.

Ward 14's nominations are now closed and 12 candidates have come forward. One of these, Chris Moise, is a solid progressive who is closely aligned with City Council's NDP left.

This should benefit him given the area and, while he has run before, he seems poised to win this time.

We will take a closer look at this race down the road.

All candidates in both by-elections can be found on the City of Toronto website.

In the long and drawn out battle between Uber and the taxi industry I think it is safe to say Uber won.

While the taxi industry is not (at all) without fault and has contributed greatly to the dim view so many take of it, cab driver Lincoln Samuel wrote fairly movingly of how Uber is destroying livelihoods, though to no avail.

It seems we can now look forward to the worst of both worlds -- depressed earnings for all the actual drivers and the institutionalization of things like "surge pricing", which is really just a fancy way to say gouging.

One thing is clear, what passes for the left in Toronto got outmaneuvered in its constant attempt to cut deals with the city's fundamentally right-wing and free market Mayor.

Two articles are worth reading on this. Jonathan Goldsbie outlines how a deal the left thought it had fell apart. Also, David Nickle has an interesting take on the left's basic powerlessness right now.

Posted by Michael Laxer at 5:57 PM