It is a fun event that even has its own parade.

The parade was a generally colourful affair that you can, if you want to, watch a video of that has been posted to You Tube.

You will see various Ukrainian businesses and groups with floats, and, as always, a contingent of politicians. There are some Liberals, NDP MPP Cheri DiNovo, a Conservative contingent and then some folks carrying the banner of "Right Sector Canada". They show up at around the 16:35 mark.


Here is a screen shot of them: 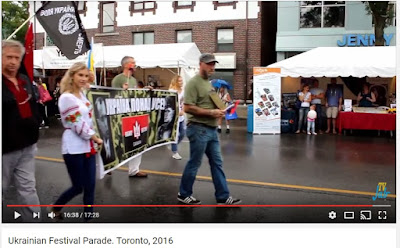 What is Right Sector Canada? According to their website:


Right Sector (Canada) is Not For Profit Organization. The main purposes of Right Sector is the relief of poverty by providing people in need with free clothes, the advancement of education, and other charitable purposes that benefit community.

Sounds innocuous enough, except for the fact that the website links to (and Right Sector Canada uses the symbol of) the website of the far right, neo-fascist and homophobic Ukrainian political formation Right Sector!

This is the same Right Sector that described itself in 2014 as "nationalist, defending the values of white, Christian Europe against the loss of the nation and deregionalisation” and that Le Monde Diplomatique noted:


rejects multiculturalism, as “responsible for the disappearance of the crucifix and the arrival of girls in burqas in your schools”, but it does not advocate joining the EU, which it describes as “liberal totalitarianism in which God has vanished and values are turned upside down”

You can read more about their brand of Ukrainian nationalism in articles like Winter Is Coming. And So Is Ukraine’s Far Right or Ukraine’s far-right menace or on their wikipedia page.

You can read Right Sector's program, which you can have translated into English by Google for yourself on their webpage, including their call for the "Promotion of traditional family values, the sanctity of marriage and motherhood" and to stop the "spread immorality in society, gender politics, sexual perversion."

By "sexual perversion" Right Sector primarily seems to mean homosexuality based upon their statements in both 2015 and 2016 in opposition to the Gay Pride Parade in Kiev.

In 2015 The New Yorker reported on this and how it escalated into violence. As the parade began and people started arriving:


they found several buses full of police in riot gear—but also a number of young men and at least one woman wearing black T-shirts with the logo of Right Sector, the ultranationalist coalition that had threatened violence.
“Right now, during the war with Moscow,” the Right Sector leader Dmytro Yarosh wrote on his Facebook page on the eve of the march, we “will be forced to be distracted from other things in order to stop those who hate the family, break morals, and destroy morality and the traditional concepts of humankind.” He went on to say that the West is exercising too much influence over Ukraine “in order to force them to introduce the ideology of L.G.B.T. people.”


Shortly before 10 A.M., about two hundred and fifty people, surrounded by roughly twice as many police and interior troops in riot gear, stood in formation and chanted for about fifteen minutes before setting off. I was among them, and no sooner did we start walking forward than the volunteer marshals in baby-blue baseball caps and crossing-guard vests told us to retreat. The police were beating back gay-bashers, some of them dressed in the Right Sector’s black T-shirts and others in camouflage uniforms. The attackers were throwing flares and firecrackers, but after about a minute, all seemed safe. As more police in riot gear ran toward the front, soon-to-be marchers applauded. As the police led back the gay-bashers they had detained, some of whom screamed “Death to the faggots!” the crowd chanted, “Riot, love, and don’t give up your rights!” After a few minutes, happily, the volunteers led the marchers to reassemble in groups, five people across and five people deep.

This year while there was, thankfully, no violence, Right Sector was again involved in a vicious campaign against the parade that included threats:

On Sunday 12 June, the Ukrainian LGBT community is organising a Gay Pride march in the centre of Kiev. Hundreds of participants have confirmed they will attend the event on social networks. However, shortly after the announcement from the organisers, the Organization of Ukrainian Nationalists (OUN) released a statement in which they promised to not let the event happen. The statement said:
"Today, we are forced to accept LGBT marches and festivals, and thus join the ranks of sinners and those who cover them. Who is going to be equated on this Sabbath? Immoral freaks, clowns and degenerates will be equated with those who have honour and dignity, respect and love for their neighbour, soldiers who gave their lives and health protecting peace in the country?"
Following this release, other nationalist groups, among which the infamous Right Sector (Pravuy Sector), supported the initiative of the OUN to stop the LGBT community appearing in the streets of Kiev peacefully. The spokesperson of the Right Sector, who to my unpleasant surprise is now Artem Skoropadsky, a Russian born and former correspondent in one of the Ukrainian newspapers, declared: "Our colleagues from the OUN movement have released a strong statement about the gay parade in Kiev. In short, on June 12, there will be a bloodbath in Kiev. The organisers of the march still have time not to hold the march."

All of which begs the question what was a contingent that openly links to their website and that uses their symbol and name doing being allowed to march in the festival parade at all?

A question that people might want answered and clarified before next year's parade starts.