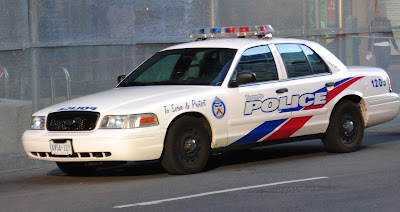 This list covers the week of  July 23 - 30. It is generally in order of the date of the article's release.

1) ‘Make It So’: ‘Star Trek’ and Its Debt to Revolutionary Socialism

H. G. Wells’s foundational work of political science fiction, “The Time Machine,” predicted a future in which a small utopia of sprightly elites is kept running by a subclass that lives below the ground and is reduced to bestial violence. This prediction, carried to a horrifically logical extent, represented the intense wealth disparity of the Victorian England in which Wells wrote the novel. Judging from the major political narratives of the fictions of our era, films like “The Hunger Games,” “Elysium” and “Snowpiercer,” the certainty of a future rendered increasingly barbarous by class division remains essentially the same.

Peel Regional Police have charged a Mississauga, Ont., man, who earlier this year posted a YouTube video offering a $1,000 reward for recordings of Muslim students during prayer, with a hate crime in connection with "numerous incidents reported to police."

For years the battle-hardened and decorated American veteran wrestled with his conscience, with whether he'd done the right thing in saving the life of Omar Khadr, seen by many as a terrorist who profited from his crimes.

4) Get ready — Toronto’s next wave of Black voices will be more urgent, strident and radical.

For Black citizens, the city just doesn’t feel like home anymore and nothing is being done to change that.

Omar Khadr is a polarizing figure. To some, Khadr is a child soldier who was brainwashed by his parents and then abandoned by the Canadian government in the notorious and illegal Guantanamo Bay detention camp in Cuba. To others, Khadr is a terrorist deserving of no sympathy.

The lead author of the controversial Israel Anti-Boycott Act, Democratic Sen. Ben Cardin of Maryland, is open to amending the legislation to address concerns raised by the American Civil Liberties Union, he told The Intercept Monday evening.

In the small Manitoba community of Waterhen, population 169, Jon and Karissa Warkentin are fighting for the right to stay in Canada and run their business.

A mere 16 per cent of Macron voters picked his political programme as the main reason behind their vote, so why are we so surprised that the more the public see of Macron and his politics without the spectre of Marine Le Pen, the more they begin to resent him?

12) John McCain is far more consistently bad than you've been led to believe; here are his greatest hits

What sort of person takes a break from taxpayer-funded cancer treatment and flies 2,000 miles to cast a vote that could result in 22 million people losing their health insurance and tens of thousands of them also losing their lives, then makes a big speech about how messed up the whole process is?

Roughly 700 ground crew workers at Toronto's Pearson airport walked off the job Thursday night after voting to strike during the busy travel season of summer holidays.

Yesterday I was arrested for speaking at a public meeting. The Toronto Police Services Board met yesterday for the first time since we learned about Dafonte Miller, a Black teenager who was attacked and badly beaten by Toronto police officer Michael Theriault and his brother Christian Theriault. The police board did not want any public discussion about this officer, so the issue was not on yesterday's meeting agenda.

15) Stepping to Conclusions: The Truth Behind "Stairgate"

I spent a week up north with my family last week while "Stairgate" held the attention of every media outlet in Toronto, beginning with the Toronto Sun. You might be tired of it, but please indulge me. I need to vent a little.

One day in 2014, the video-game designer Zoë Quinn decided to make herself a cyborg. And so, this being the modern world, she simply ordered a kit from the internet that would allow her, via a large sterilized syringe that she plunged into the webbing between her left thumb and index finger, to implant a microchip the size of a Tic Tac under her skin.

I work in politics, so I’ve received my share of threats.
But I never thought I’d get one from my own MP.

18) How We Make Black Girls Grow Up Too Fast

It was over a plate of ribs at my aunt’s dining room table when I learned that being a woman is about what men are allowed to do to you. I was 15 years old. Mike Tyson was the most famous boxer in the world.

19) From the Enlightenment to the Dark Ages: How “new atheism” slid into the alt-right

A movement supposedly committed to science and reason has decayed into racism, misogyny and intolerance. I'm done.

There were some heated moments on day two of the Assembly of First Nations gathering in Regina when the talks turned to the National Inquiry Into Missing and Murdered Indigenous Women and Girls.

When 63 million people voted to elect Donald Trump as the President of the United States, it opened up the floodgates for toxic white masculinity in America. We saw it coming, but we are just now fully experiencing the consequences and they are deeply disturbing.

Like many NATO countries, Canada has suffered from an impoverishment of free and open debate when it comes to the issue of relations with the Israeli government and the Palestinian people. In country after country the Israeli lobby dominates not only governing parties but opposition parties as well.

23) Strange Fruit: Venezuela has an Opposition that Nobody Should Support

Bolivarian University Professor Chris Gilbert addresses the racism and white supremacy of the Venezuelan opposition in light of recent lynchings against Black and Brown Venezuelans accused of being "Chavistas" or "thieves" by opposition militants. The most emblematic of these cases was the public lynching of Afro-Venezuelan Orlando Figuera on May 20. Figuera was stabbed six times, doused in gasoline, and burned alive by opposition protesters in the eastern Caracas neighborhood of Altamira. He died in hospital ten days later. Other prominent cases include that of Danny Subero, Pedro Josue Carrillo, as well as a pair of youths in Lara state.

This important article that we missed is from before the period covered:

24) Who Is Killing American Women? Their Husbands And Boyfriends, CDC Confirms.

Most murders of American women involve domestic violence, according to a report released by the Centers for Disease Control and Prevention on Thursday.