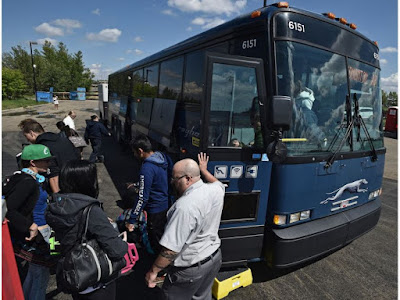 The news yesterday from Greyhound Canada was drastic and dramatic.

"With the exception of a single bus route between Vancouver and Seattle, all Greyhound service in British Columbia, Alberta, Saskatchewan and Manitoba will shut down as of Oct. 31, the company said in a statement issued Monday afternoon."

Also: "In Ontario, travel west of Sudbury on the Trans-Canada Highway will end. Thunder Bay and Sault Ste Marie are among the 56 stops that will lose service."

In addition to the loss of 415 jobs these cuts will dramatically effect the transportation options of millions of people. It will leave some rural centres almost completely cut off from the outside world for those without cars. These are most often and most likely to be seniors, youth, the disabled, people living in poverty and people from marginalized and racialized communities.

Mayors of many communities have expressed shock and frustration as did Alberta's Minister of Transportation Brian Mason.

As a business decision this step by Greyhound Canada likely makes perfect sense. Private businesses exist to make a profit, not to deliver a social need or service. Should the delivery of social needs and services make a profit then private enterprises will be happy to maintain them. As soon as they don't, this is what happens.

Those that have not been, such as the Ontario Northland Motor Coach Services -- which is operated  by a Crown agency -- are run entirely according to the logic of the market and neoliberal ideas of how to mange "public" services. (We have looked at this logic before in articles like: Canada Post's 'problems' are driven by the neo-liberal assault on public services ).

In Ontario Northland's case, for example, bus fares are hefty. If an adult riding by themselves wanted to take the 11.30 am bus from Sault Ste Marie to Toronto tomorrow the fare would be $148.45. That is for one single ticket, one way. In addition the Ontario Liberal government axed the Northlander train that connected many communities from Toronto to Cochrane in 2012 as the route was a money loser.

Again, the government used market concepts to dictate what to do with what should be seen as a public service that exists to encourage mass transportation usage, to connect communities and to allow people who do not own cars to travel.

Greyhound Canada should be immediately nationalized to maintain and even expand these routes, though we all know this is not going to happen.

But one has to ask, what will it take before governments of all stripes in Canada abandon the neoliberal approach to transit and transportation and begin to view it, build the networks and run them as both an essential service for many millions of people and as a key tool in combating climate change?