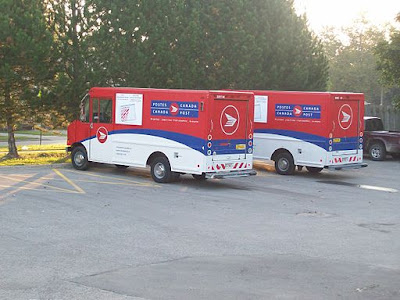 Canada's politicians and media have bought into a long-term project driven by right-wing notions of society and the economy that seeks to re-frame public services as "businesses" that should be run "efficiently" along the lines allegedly followed by the private sector.

While the mythology of the private sector's supposed efficiency is nothing more than that, mythology, that is a matter for a different article.

What is abundantly clear is that by seeking to apply fictional market ideals to government run services successive governments have sought -- intentionally or instinctively -- to change the way the public views these services by no longer treating them as services at all.

Last year Canada Post actually made a profit of $63 million. While this is, I suppose, a positive thing, it also means that there is at minimum $63 million that could be put back into providing a still very necessary service for the Canadian people and businesses.

Yet Canada Post on its own webpage bemoans this profit as somehow insufficient and states "The profit is modest compared to the Corporation’s revenue and the significant challenges we face as a company."

What company? What Corporation? Reading this you would have no idea that this "company" was government run and was, at least once-upon-a-time, designed to serve the interests of the people of Canada. It reads as a private company's announcement to shareholders would and shows how far along the path to eventual privatization Canada Post's management has taken it.

All of the "issues" facing Canada Post, from the desire of management to eliminate door-to-door delivery, to the constant increase in postal rates, to its confrontational stance taken towards its own workers that are leading to this impending lockout, are driven by this notion of the postal service as a for-profit enterprise and all of them could be dealt with by changing this fundamentally flawed and anti-public service neo-liberal approach.

The irony is that this ethos is even harmful to the very private sector that encourages it. Canada Post's rates have gone up-and-up-and-up and are not at all competitive versus the United States Postal Service as anyone who depends on parcel delivery for their business is well aware. Instead of the government subsidizing the postal service sufficiently to keep rates low, Canada Post has kept increasing rates despite having turned a profit in all but two of the last 21 years. This puts Canadian retailers at a direct competitive disadvantage.

The ethos is also the very basis of Canada Post's "rush-to-the-bottom" attitudes to employees imported from the private sector that seeks to maximize profit at the expense of workers even if this leads to a socially and economically harmful labour and service disruption.

This is what creates the ideological conditions in which we see a statement like:

"We need a more flexible model," Canada Post spokesperson Jon Hamilton told CTV News.
"We need a model that allows us to deliver on evenings and weekends and peak times without having to pay double time, which is pricing us out of the market."

Of course, it is only pricing Canada Post "out of the market" if Canada Post and its operations are driven by market forces.

And they are only driven by market forces due to the actions of Canada Post itself and successive governments that have sought to turn a critical public service into a for-profit enterprise driven entirely by neo-liberal and private sector notions to transition it from acting in the public good towards preparation for privatization.

As part of the critical struggle to reverse the assault on the very idea of government and a civil society beyond the market that has been intrinsic to the neo-liberal ideological austerity era, we need to fight to reconstruct the idea of the state and its enterprises and services as existing to benefit the people who own them -- the public -- as opposed to operating on business lines and models that are inimical to this and for which they were never originally intended.