Khabarovsk is a city that sits very close to the Chinese border at the confluence of the Amur and Ussuri Rivers. It is 500 miles to  the north of the more famous Russian far eastern city of Vladivostok.

During the Soviet era the city went through significant growth culturally, economically and in terms of population. By 1970 it was a metropolis with over 500,000 people living in it.

Published in the USSR in 1975, this postcard folder shows the city's various attractions, cityscapes and venues. In 1971 Khabarovsk had been awarded the Order of the October Revolution for "its great revolutionary service in the past and its outstanding economic and cultural achievements today."

A write up included with the folder (which we have scanned into this post) notes "there are hundreds of industrial and building enterprises, research and designing institutes, higher educational institutions, secondary and vocational schools and cultural establishments in the city."

Khabarovsk was where the Soviets held the last emperor of China for several years before turning him over to the new People's Republic.

The postcards are almost all panoramic in format and almost all have at least 2 or 3 images. There are lots of great shots including the photo of the Ferris Wheel, which were popular features in Soviet cities.  Also notable are the sport facilities, botanical gardens, fashion institute and the various squares, monuments and streets.

All descriptions have been included. 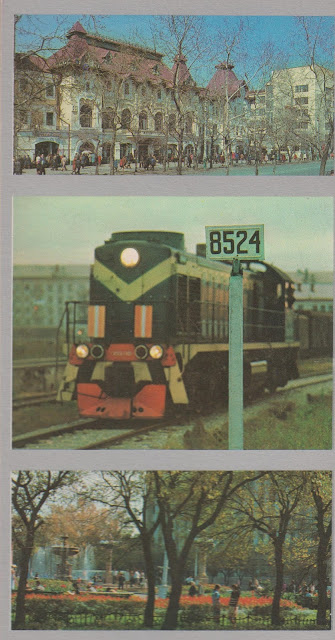 Monument to G. I. Nevelskoy / Bratina - A Drinking Vessel of the Cossack Past /
Nature Corner in the Museum of Regional Studies

Taiga Giants in Town / Monument to A. S. Pushkin in front of the Pedagogical Institute /
The Amur in the Evening

Controller's Panel at an Enterprise / In the Dockyard