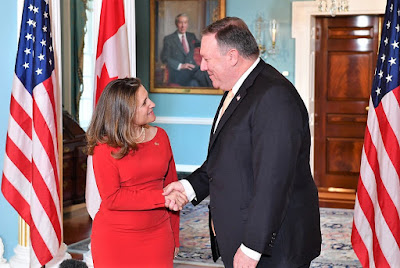 Update: It has been announced since this piece was posted that Freeland will not be Foreign Minister going forward as she is being moved to another post. As the piece notes however, the "Freeland Doctrine" will almost certainly continue to be implemented by the new minister François-Philippe Champagne.

For years now Canada's Trudeau government and its Foreign Minister Chrystia Freeland have tried to claim that their foreign policy is centered around the preservation of a "rules-based international order." Within this construct -- one that is readily accepted and regurgitated as fact by the mainstream media -- Canada, the United States and their western allies are working together to contain the alleged threat posed to this order by supposed rogue actors like Russia, North Korea, Iran, etc.

Freeland has made this the foundational ideological basis, of what could be called the "Freeland Doctrine" -- which will no doubt continue to guide the new minority Trudeau government even if she does not return as its Foreign Minister -- to be used to justify any number of steps Canada has taken from aggressively backing the disturbingly neo-fascist coup regime in Ukraine against Russia to Canada's leadership role in the Lima Group aimed at toppling the democratically elected government of Venezuela.

The problem for Freeland and her various establishment sycophants is that this line is transparently bullshit and is increasingly obviously so. The only way you can believe that Canada supports a "rules-based international order" as a staunch ally of the United States is if you believe that the US can simply make up any rules, at any time, and this can somehow be construed as "order".

The latest in a long line of examples of this is the unilateral declaration by the United States on November 18 that it no longer sees Israeli Jewish settlements in occupied Palestinian lands as illegal under international law. That they are, in fact, illegal under the Fourth Geneva Convention, which the United States signed in 1955, is very clear.

But the Trump administration simply does not care. It suits its political goals both in Israel and domestically to state otherwise so it has.

In realty, to the United States international law and any "rules" only matter insofar as they reflect American objectives. Otherwise they are either distorted or totally ignored and there is nothing new about this.

Then there is the use of completely unilateral forms of economic embargoes and sanctions by the United States against countries whose governments it does not, for whatever reason, like. The Americans feel they have the right to extend these sanctions to penalize not just American companies but any company anywhere in the world who wants to do business or conduct trade with a regime no longer in Washington's favour.

After having unilaterally abandoned the nuclear deal with Iran, for example, "the U.S. Treasury Department bragged that in just one day, November 5, 2018, it sanctioned more than 700 individuals, entities, aircraft, and vessels doing business" with them.

US sanctions on Venezuela, which are "illegal Under UN, OAS and US Law", have had devastating consequences. As  Medea Benjamin and Nicolas J S Davies noted on Common Dreams:


A study by Jeffrey Sachs and Mark Weisbrot for the Center for Economic and Policy Research, titled “Sanctions as Collective Punishment: the Case of Venezuela,” reported that the combined effect of the 2017 and 2019 U.S. sanctions are projected to lead to an astounding 37.4% decline in Venezuela’s real GDP in 2019, on the heels of a 16.7% decline in 2018 and the over 60% drop in oil prices between 2012 and 2016.

They also noted that:


In North Korea, many decades of sanctions, coupled with extended periods of drought, have left millions of the nation’s 25 million people malnourished and impoverished. Rural areas in particular lack medicine and clean water. Even more stringent sanctions imposed in 2018 banned most of the country’s exports, reducing the government’s ability to pay for imported food to alleviate the shortages.

The US continues its criminal sanctions against Cuba despite 28 consecutive years of near universal condemnation by the United Nations General Assembly. This year 187 countries (including Canada) voted to condemn the sanctions while only five, including the US, did not.

Kelly Craft, the US Ambassador to the UN, even had the audacity to say that "Like all nations, we get to choose which countries we trade with. This is our sovereign right" even though, as we have seen, the Americans do not recognize that right for any other country but themselves.

Their hypocrisy and thumbing of the nose at the "rules-based international order" could not be more flagrant.

There are many other cases one could point to historically including the staggering number of democratically elected governments the US has helped to have brutally overthrown, from those of Guatemala and Iran in the 1950s, to Allende in Chile in 1973, to Honduras in 2009, to Bolivia now to name just a few.

We have already looked at the glaring hypocrisy and contempt for democracy of Canadian actions in Central and South America in "Canadian hypocrisy and double standards in South and Central America on full display".

Freeland's "rules-based international order" is a fiction invented as cover for Canada's role in advancing the interests of the United States, western imperialism and Canadian and global corporations around the world.  It is long overdue for Canadian journalists and parties like the Greens and the NDP to start calling her out fully on it.
Posted by Michael Laxer at 9:50 AM