The United States was always the Evil Empire 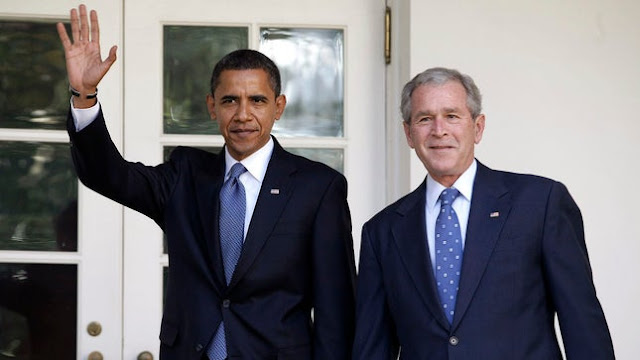 The Independent had an article from Hannah Selinger April 6 that dissected, with a degree of despair, the appalling actions of the United States and the Trump administration as the coronavirus crisis unfolds.

In it she notes that the Americans are acting in ways that show a disregard for other countries citing some obvious recent examples such as the dubious desire to stockpile hydroxychloroquine as well as engaging in what she describes as modern piracy by seizing masks, ventilators and medical supplies.

The headline rather starkly says that "what America has become during this epidemic is deeply worrying".

American actions are, without doubt, deeply worrying. There are numerous examples of their flagrant disregard for other peoples from seizing 20 ventilators meant for Barbados, to threats aimed at India, to trying to prevent masks from going to Canada, to continuing to build the wall on the border of Mexico, to the criminal attempts to increase the economic and other types of pressure on Venezuela.

In fact, the United States has continued with its illegal sanctions against not only Venezuela but also Cuba, Iran, the DPRK and other countries. Under these circumstances it is hard to see this as anything other than a crime against humanity. The sanctions are already leading to countless unnecessary deaths in Iran and will likely lead to many more in all the effected countries.

It is simply barbaric for them to be kept in place during a global pandemic and, as we have already noted on The Left Chapter, all progressive Canadians need to speak up about this as Canada is complicit in it.

Trump's egotism knows few bounds and his racist, backward nationalism is shameful to be sure.

But the notion that this is what America "has become" is wrong. The United States is not just now emerging as a rogue nation that could not care less about international laws, norms or diplomacy, it has been like this for a very, very long time.

As we have noted before, to the United States international law and any "rules" only matter insofar as they reflect American objectives. Otherwise they are either distorted or totally ignored.

The sanctions against Cuba began decades ago and have been overwhelmingly condemned for 28 consecutive years at the United Nations. The sanctions against Venezuela began to intensify under Obama and, of course, the coup in Honduras took place on his imperialist watch as well.

Obama deported "more people than any other president" and in 2006 "Obama, [Hillary] Clinton, Biden, Schumer and 20 other Democrats in the Senate at the time voted in favor of the Secure Fence Act, which called for a physical barrier to be built along the U.S.-Mexico border."

American cruelty, duplicity and criminality internationally goes back so far and is so common that there are almost too many examples to chose from. The horrific coups and "dirty wars" in Latin America, the overthrow of Allende in Chile, the support of the Khmer Rouge in Cambodia, the Mujaheddin in Afghanistan and apartheid in South Africa, backing the genocidal anti-communist killings of hundreds of thousands in Indonesia in the 1960s, the invasion of Iraq and on and on and on. An endless stream of violence, assassinations, military regimes and perfidy.

Under Trump the US is acting in a fashion more explicitly and overtly crass making it harder for American allies to pretend that it is the great global force for "freedom" and "democracy" that they claim it is. But it is not doing anything fundamentally different from what anyone should have already grown to expect. The arrogance and indifference is decades in the making by presidents Republican and Democratic.

The United States has always been the "evil empire" that Reagan used to blather on about. We can only hope that what is happening now will sound a death knell for the fiction that has been constructed by our media and politicians about an American "leadership" and benevolent, internationalist foreign policy that never existed.

Posted by Michael Laxer at 4:57 PM