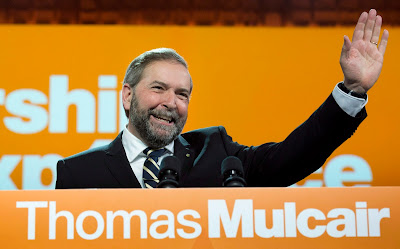 As the clock ticks down to judgement day in Edmonton next month for Tom Mulcair's leadership of the NDP, the lines are being drawn in what is shaping up as a left-right fight.

Both former OFL chief Sid Ryan and Ontario MPP Cheri Di Novo have offered up very effective public critiques of Mulcair from the left and have pointed out the obvious fact that if party members want to see a shift towards the politics of  Bernie Sanders or Jeremy Corbyn, or Gary Burrill in Nova Scotia for that matter, then Mulcair has to go.

He likely has to go as well if party members wish to make the NDP less top-down and run basically exclusively by backroom strategists. For a party that has "democratic" in its name the NDP's record on internal democracy is pathetic and disturbing.

Both during and after the disastrous campaign of 2015 writers such as myself, Matt Fodor and Fraser Needham on The Left Chapter repeatedly pointed to the sharp turn to the right that was occurring under his tenure. Attempts since by Mulcair to re-frame himself as suddenly deeply concerned with inequality and the fight for social democracy come off as entirely disingenuous.

In fact, probably no one has made the left's case against Mulcair better than, ironically, the Winnipeg Sun in its sneering, condescending and reactionary editorial endorsement of him that reads in part:

...Mulcair understood he had to appeal to the centre. He went to the voters, rather than making the voters go to him.
This is an important distinction to make. Because the very faction calling for Mulcair’s ejection don’t think this way. It’s the socialists within the party who want Mulcair turfed.
But they don’t represent average Canadians. Their ideas are on the fringe. Those ideas are hard to sell to the public and for good reason. Canadians aren’t socialists.
We had a lot of respect for Mulcair during the last campaign as he didn’t run on nutty far-left ideas. While we disagreed on a number of his positions, we respected his commitment to lowering the small business tax credit and his refusal to pledge reckless deficit spending.
He understood that taxes and debt payments just end up harming the little guy at the end of the day. However the socialists don’t care about the little guy. They just care about implementing their utopian agendas.

But, of course, the Winnipeg Sun is not wrong. Mulcair did support right wing ideas like tax cuts for "small business" and he did oppose personal tax increases on anyone, including even the wealthiest Canadians. He also did, of course, make a ludicrous and totally wrongheaded balanced budget pledge that could never have been kept anyway without a severe austerity program.

In the end, however, it may be that this increasing framing of Mulcair's leadership review as a "left-right" or "left-moderate" issue will actually help Mulcair to keep his job. Many on the left have already abandoned the NDP altogether and the party's organized left-wing, in groups like the Socialist Caucus, are completely marginalized and insular.

What is unfortunate about this is, setting aside the very important ideological issues for a moment, that Mulcair's leadership should be ended entirely on its own premises!

While it is true that any serious attempt to reorient or reinvent the party cannot happen if he stays on, and while it is also true that the shift to Third Way policies and tones that began under Layton and were consolidated under Mulcair can only be stopped by his ouster, it is also true that the entire purpose of the "pragmatic" shift and the entire justification of his elevation to the top spot was predicated on his ability to turn the Orange Crush of 2011 into Canada's first NDP government.

He failed to do this rather spectacularly. He even lost a considerable number of seats in Quebec, which his leadership was meant to easily preserve as the NDP's new stronghold. He was wiped out in Toronto and Atlantic Canada and while the deluded can try to point to the "second best election result in NDP history" (which is not quite true anyway) as some sort of solace, we all know that New Democrats could taste power this time.

Mulcair was meant to deliver it. He was supposed to be easily able to best the neophyte (and as it turns out grossly underestimated) Justin Trudeau. He was going to transform the NDP into Canada's permanent "credible" alternative to the Conservatives. He was going to win!

As a Montreal area NDP riding association president Alain Charbonneau put it recently on the CBC:


"We lost so much," he told CBC Montreal's Daybreak.
"He was hired, basically — voted in as leader — because he was supposed to be the one who could win. That was his mission. He failed."

While there are precedents, especially in the NDP, for leaders to stay on after failing to lead a party to power, these were leaders who were either not expected to win or who at least delivered the party back to a position it already held.

Mulcair not only failed to take government, he lost the party's status as Official Opposition and allowed the deeply loathed Trudeau to leapfrog the Liberals from third party in the house to majority government -- a feat that had not previously been accomplished in Canadian parliamentary history.

Defenders of Mulcair staying on have had to resort to saying one variation or another of "if not Mulcair, who?" and insist that of all the possible options available to the NDP, he remains the best.

While hardly a ringing endorsement of either Mulcair or the qualities of those who surround him in the party establishment, it also not only misses the point that a leadership race would possibly give rise to the unexpected, but that Mulcair is a spent force even if one is totally uninterested in a shift to the left.

If Mulcair could not sell himself and his anemic "vision" against Trudeau and the Conservatives from a position of strength as leader of the opposition and from a starting point in terms of seats that was far ahead of the Liberals, there is absolutely no reason to think, in the game that is bourgeois politics, that he will be able to do so down the road and from the position of weakness he and the party are in now.

The NDP's very peculiar and inward looking culture is vividly on display here.  Perhaps never really comfortable with or believing of the idea that they could actually win, or perhaps unable to admit that they were wrong about Mulcair all along and that it turns out that the critics were possibly right that if you sell your soul for power in a party like the NDP you are likely to lose both, the NDP seems on the verge of rewarding what by any measure was a catastrophic defeat.

It is not solely or perhaps even primarily that Mulcair is a barrier to a return to roots, it is that having tried to supplant the Liberals by mimicking them Mulcair lost. He is not only not the politician to bring to the NDP any type of authentic social democratic narrative, he has also shown that he cannot win on the terms he claimed that he could win on.

While New Democrats may not be willing to acknowledge the error of their ways and their misjudgment of  Mulcair, the electorate is far less forgiving of failed narratives.

If Mulcair remains the NDP is left with the worst of both worlds. An opportunistic and centrist leader who lost badly and one who also could not connect with voters and win when it mattered.

See also: The NDP's campaign disaster was much more than a failure to communicate