For a Socialist America! - Leftist #TBT

While ironically at the very time socialism as a "mainstream" political idea has been on the decline in Canadian political discourse -- with the NDP dropping the word from its constitution and its very vocabulary -- it has seen something of a renaissance in the United States of late.

The election of socialist (although not Socialist Party) Kshama Sawant in Seattle had and is having a serious impact on political discourse both in the city and more broadly.

Meanwhile, Bernie Sanders, who openly describes himself as a socialist, is making a bid for the Presidential nomination of the Democratic Party -- a bid that the mainstream media cannot ignore.

Today, for Leftist Throwback Thursday we look at the 1936 platform of the Socialist Party of America.

The party was founded in 1901 and reached the heights of its popular support with the Presidential candidacies of Eugene V. Debs and Norman Thomas in the early 20th Century.

The 1936 platform is notable both for its economic radicalism, its ideas like a 30 hour work week and its emphasis on union and civil rights. 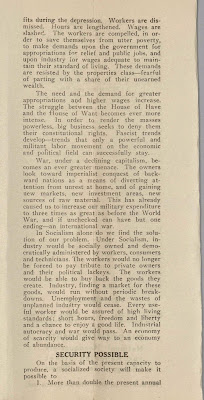 Posted by Michael Laxer at 3:48 PM