Justin Trudeau's tax plan revisited: It is much smarter politics than policy

(This piece is a follow-up to: Trudeau outmaneuvers Mulcair on taxing the wealthy)

Since the Liberals released their tax platform for the upcoming election on Monday, which included a plan for the largest increase in personal taxes on the very wealthy in recent Canadian history, but also substantive tax cuts elsewhere, commentators have been seeking to read the tea leaves on how meaningful the plan is and what its impact will be.

Jeffrey Simpson argued that it was a tactical error for Trudeau to try to encroach on the Tories "turf", while  Chantal Hébert seemed to feel the exact opposite. Thomas Walkom claimed that, on close inspection, the plan "seems to be advocating Harperism with a human face".

Which is probably pretty close to the truth, though not at all necessarily the point.

The Canadian Centre for Policy Alternatives (CCPA) released a comprehensive analysis that started by saying:

But then went on to note that, according to their calculations, the corresponding pledge of a "middle class tax cut" on incomes of between $45, 000 and $89,000, when combined with the other aspects of the plan, actually has a net regressive result on everyone under the top bracket.

The NDP, who I have argued were totally outmanoeuvred by Trudeau on this (a point I will return to), predictably responded by trying to emphasize (and I would say thereby misrepresent) only that alleged aspect of the Liberal plan with online memes like this one: 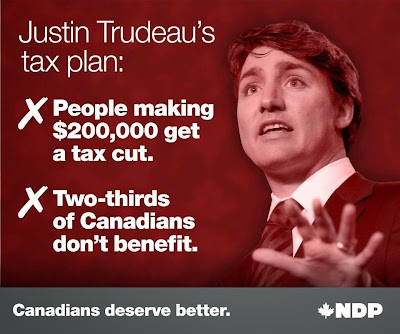 Why they are doing this should be pretty clear -- the Liberals have taken the "tax the rich" narrative out of the hands of the perceived Canadian left and social democratic party due to the fact that Tom Mulcair has repeatedly, and foolishly, promised that personal income tax increases are off-the-table for absolutely all income brackets -- including the "1%".

New Democrats are in the position of having to argue that their plan to tax corporations and "close loopholes" is actually (though the net effect on income inequality of corporate tax increases is basically zero), somehow more "progressive" (and, of course, "better" for the all-important "middle class" that is the only class any politician talks about any more) than one that actually directly taxes rich people more!

The Liberal plan, to be clear, is not a good plan. While raising taxes in this way on the very wealthy is an excellent step, the corresponding tax cuts are totally counter-productive, harmful and, regardless of who the net benefit goes to, inherently reactionary, as are all calls for so-called "tax relief", including the NDP's absurd "small business" tax cut plan.

But, and regardless of the commentary or the facts as correctly portrayed by the CCPA, and despite the NDP's attempts to frantically frame it in a way less harmful to them (for despite what Simpson and  Hebert say the Liberal tax plan is at least as much aimed at  the NDP's "turf" as that of the Conservatives), I am not sure that that will at all matter.

Popular political narratives, especially in an era where all the parties pander to notions of "tax relief", are not really centred around "the details". While the politically conscious, policy wonks and commentators look at proposals in great detail, the voters tend to respond to broad narratives as opposed to what the CCPA or leftist writers such as, for example, myself are saying.

It is not as if there is a long established history of governments in Canada being elected based on the actual validity of their economic ideas or proposals!

Trudeau's plan is cynically smart. He can present it as redistributive -- which I can assure you he will -- and as taking from the wealthy to help those who are not.

He will also certainly directly question Mulcair in the media and in debates as to why Mulcair is not also in favour of higher taxes on the wealthy -- which is, in fact a perfectly valid question.

In typically Liberal fashion he also aims at Conservative voters.

The plan aims to cut both ways and there is every reason to believe that it could easily succeed in this.

Mulcair, of course, can totally disarm Trudeau's jab instantly in his direction by pledging to do the same thing -- as virtually every left -wing voter and progressive in Canada would like to see him do. His inflexibility on this is mystifying given that it is impossible to see how this strategy will benefit the NDP unless they think they are destined to win the election based on the votes of those on the Bridal Path.

While raising taxes on corporations is a good idea, there is absolutely no reason the NDP cannot or should not favour taxing the rich directly as well -- and it is a consistently popular idea.

Mulcair's obsession with seeking to appear to be "responsible" and to eschew any hint of economic radicalism may truly come to haunt him and his party.

If it does the NDP will have absolutely  no one to blame but themselves.