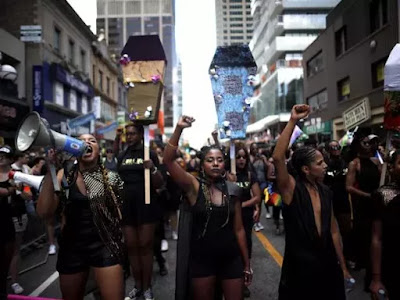 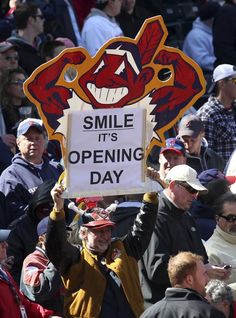 Had one approached her, called her out on the bigotry implicit in wearing such an image, she would no doubt have been both shocked and denied it was bigoted or racist at all. It was "tradition" or simply a logo or just for a laugh or whatever pretense one uses to justify this form of abject, vicious ugliness that can only be ok to those who simply are unwilling to understand what images like these mean historically and the role they have played in creating a culture of racist indifference.

The vast bulk of white folks it seems simply do not want to and cannot accept that they have built and are the direct beneficiaries of a colonialist and racist social order and that they have woven that order's narratives and lies into their fictions about themselves and their society,

And so it is with the pathetic and, indeed, deeply racist reactions to the very minor, and profoundly just, protest that Toronto's Black Lives Matter (BLM) made at the Toronto Pride parade.

Suddenly legions of white people, the vast majority of whom could not possibly care less about LGBT pride or liberation aside from when they get to sound liberal about gay marriage with their friends, are up in arms about how BLM allegedly sought to derail Pride for their own "agenda" or sought to somehow "exclude" the police in future as if such a thing were possible,

Accused plagiarist and pseudo-intellectual dilettante Margaret Wente, who always seems to play the apologist for power and the status quo in situations like this, wrote a column, of course, furious that BLM's protest might imply that we have issues of systemic racism in our policing in Canada comparable to those in the United States -- which, needless to say in spite of all the evidence to the contrary, we don't because this clueless wealthy white person says we don't.

To her, these activists from a community that has been marginalized economically and socially for centuries are "bullies" -- as opposed to the police whose practices of carding and racial profiling have been an assault on the rights of people she does not know or care about, and whose continued resistance to changing their behaviour belies their rhetoric about celebrating inclusivity.

The most powerful people in our society, one of the armed wings of the state, are supposedly being "bullied" by unarmed, peaceful activists from a community they have brutalized forever.  It is a stunning, staggering, shocking reversal of historical fact,

Or we have Joe Warmington, who was a stalwart apologist for homophobic bigot Rob Ford, claiming that Pride owes the police an apology! Maybe he could apologize to Toronto's LGBT community first out of basic decency.

That is what so many of us white folks are, Pathetic.

In fact, when called on it, white people love to play the victim and to try to cry "reverse racism" or some other sad refrain.

And so it is again, now, in Toronto.

BLM peacefully, and for a very short time, stopped a march that was created in the wake of police violence to call out not just issues with Pride but continuing police violence against racialized communities. BLM forced Pride organizers to take notice in the only way they could and forced concessions that now appear will not be honoured.

In doing so, they acted in the very best traditions of Pride.

And that is what we need to remember.

It is the police who are doing the oppressing and it is Black Lives Matter that is fighting oppression.

Not only are Black Lives Matter right to ask that the police not have a float in Pride, the police should never have been there to begin with.

See also: It is not "political correctness" that hurts the poor Mr. Kay, it is systemic oppression and those who enable it

See also: It is not just the police spending in Toronto that is out of control -- it is the police themselves
Posted by Michael Laxer at 8:42 PM