The NDP and budget deficits: Not the Tommy Douglas vision 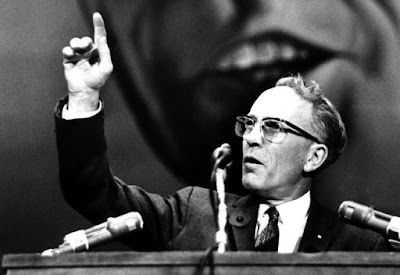 The 2015 Canadian federal election took another strange turn this week.

NDP Leader Thomas Mulcair committed that his first budget as prime minister would be a balanced one. This seems somewhat strange as Canada appears to be headed into a recession and if the current Conservative government has struggled to maintain services in recent years without running deficits, in what have been stronger economic times, the only way a new government could balance the budget in a weaker economy would be through substantial cuts. The minor revenues gained by an NDP government canceling income splitting for high-income earners and a modest corporate tax increase would not be enough to maintain current spending levels in an economic downturn, let alone meet other campaign commitments such as a national childcare plan.

For their part, Justin Trudeau and the Liberals have committed to a modest plan of running $10 billion deficits for three years before balancing the budget in 2019-2020. Deficit spending would be used to address the infrastructure deficit and create jobs and economic stimulus. The Liberals quite rightly point out that with interest rates being at historic lows, now is a particularly good time for a government to borrow as a means of stabilizing a slumping economy.

With the NDP committed to balancing the next budget, regardless of the consequences, and the Liberals open to running deficits, a number of media analysts have accurately characterized the Mulcair NDP of trying to outflank the Liberals on the right. However, “not so” scream a number of diehard NDP supporters. Balanced budgets are not a right wing mantra and have long been in the tradition of the CCF/NDP governments, they contend. As examples, they cite the Saskatchewan CCF/NDP governments of Tommy Douglas and Allan Blakeney who governed under successive balanced budgets.

To put it politely, this is a highly creative and selective version of the truth. Here are the facts.

When Tommy Douglas and the CCF were first elected in 1944, it was on the heels of a number of Liberal deficit budgets. However, it is not surprising the Liberals were running deficits after Saskatchewan had been one of the provinces worst hit by the Great Depression followed by a wartime economy. In fact, it was the inability of the Liberals to use government as a positive force to prevent farm foreclosures and maintain grain prices that marked the end of 34 years of Liberal rule and the beginning of the CCF era.

The post-war CCFers were committed Keynesians. This means they believed government could be used as a positive force to stabilize the economy. Thus, in good economic times government should save surplus revenues and in bad times a government may need to run a deficit in order to stimulate the economy. Budgets need not be balanced every year but over a period of years according to the economic cycle.

Therefore, the Saskatchewan CCF came to power promising increased social programs for all people, greater economic stability and a more progressive tax system. Part of bringing greater stability to the economy meant a commitment to nationalization of parts of the economy including auto insurance, electricity and some resource industries. Nationalization of electricity and auto insurance not only allowed the government to provide affordable levels of service to all people in a small and largely rural province, it also allowed the government to take in revenues that could be used to pay for other social programs.

So, the CCF governments of Tommy Douglas and Woodrow Lloyd were good fiscal managers but they also benefited from the post-war boom of the late 1940’s and 1950’s as well as increased revenues from progressive taxation and nationalization. As such, they were able to balance every single budget from 1944 to 1964.

Saskatchewan did not see deficits again until the late 1960’s and early 1970’s under the Ross Thatcher Liberals. The deficits were not so much due to Liberal mismanagement but more the result of a downturn in the farm economy coupled with a reduction in production by American-owned potash companies to maintain prices.

Allan Blakeney and the NDP were elected in 1971 on a platform of bringing greater stabilization to the economy through further nationalization of resource industries. After the newly elected government was unable to reach an agreement with the potash industry in terms of production levels, they nationalized this industry. They also proceeded to nationalize the uranium, oil and gas industries.

As a result of the massive increase in revenues due to nationalization of these key resource industries, the NDP had more than enough money to balance every single budget from 1971 to 1982 and finance a number of social programs. Further, the government was able to put about $1 billion away in savings.

The point of all of this is to demonstrate that the Mulcair NDP is not similar to the Douglas CCF and Blakeney NDP in any way, shape or form. To try to equate the two is intellectually dishonest. Douglas and Blakeney sought to make transformative changes to the capitalistic economy in order to level the playing field, bring stability to the Saskatchewan economy and finance social programs. Balanced budgets happened to be part of the process but were not the main goal in and of themselves. Neither Douglas nor Blakeney would ever have advocated balancing a budget regardless of the economic circumstances.

Balancing a budget regardless of the economic fallout is a more recent and right wing mantra. It falls into the belief that government should never intervene in the economy and government finances should be operated like an accounting ledger – surpluses should always be spent and deficits never incurred.

The Mulcair NDP is not committing to transforming the capitalist economy at all through either progressive taxation or nationalization. However, without even knowing the true state of government finances or how severe the economic downturn may be, they have committed to balancing the budget. This is completely irresponsible and is only in the legacy of the Mulcair NDP and no one else.

The statement is a vain attempt to appear fiscally responsible to the right wing press and at the same time hope that this same press attacks the Liberals for actually admitting a deficit(s) may be likely. Faced with a cut to services and running a deficit, it is likely an NDP government would choose the latter so why be so dishonest in an election campaign?

It is clear that the NDP wants to cash in on the anti-Harper vote in this campaign as a means of forming government. However, making ridiculous policy statements such as balancing the budget in the midst of a recession only makes anti-Harper voters not take the NDP seriously and look elsewhere. If the NDP wants to replace the Conservatives, it is not just enough to be anti-Harper, they have to be credible.

See also: Mulcair doubles-down on the NDP's right shift by defending Thatcherism
Posted by Michael Laxer at 7:07 AM