Full austerity jacket -- The gloves come off in Tory's Toronto 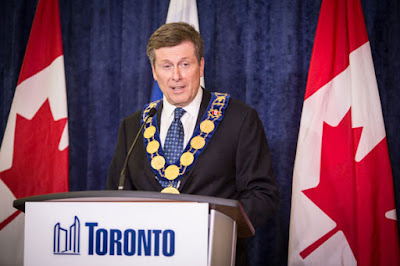 With Toronto City Council's reaffirmation of its commitment to the staggeringly wasteful $3.2 billion one-stop Scarborough subway extension while also backing Mayor John Tory's plan to force all city departments and agencies to slash 2.6% in spending, the gloves have truly come off in Tory's austerity Toronto.

Long gone are the days when Tory tried to pretend that his administration would be governing on the basis of evidence-based decision making. As with the previous Ford administration, Tory has pushed a Scarborough subway plan that costs far more and provides less actual service than the 7-stop LRT that could have been built in its place, and he did so for reasons that were a combination of "saving face", short-term political goals and a continued apparent complete lack of understanding by large swaths of Toronto's political class about what LRTs are -- which have allowed cities like Portland to build transit networks that put Toronto's to shame.

While this ludicrous boondoggle proceeds, the TTC may well face service cuts in other areas with the absurd "one size fits all" approach being taken by dictating blanket spending reductions as if all departments are of equal importance or can be handled in identical ways. He even successfully resisted motions that would have ensured that Toronto Community Housing and anti-poverty strategies were not adversely effected by any cuts. To justify all this Tory reverted to that old canard of the neo-liberal austerity era of attempting to draw a totally bankrupt analogy between government and the managing of a private business or household by stating:

The analogy is fundamentally flawed as not simply is government not comparable to these entities but "every" family, business, etc does not have to do "the same for less" every year nor would they approach their budgets in such a cookie-cutter way! (I am unaware of any family facing new financial challenges that would "cut" spending on food or household essentials by exactly the same amount as they would spending on going to the movies or buying luxury items, as just one example of how stupid the comparison is.)   This is an absurd assertion to make that also  neglects to take into account that government actually controls its own revenue and that it has been fundamentally handicapped in Toronto by politically reactionary stunts such as Tory's insistence that any talk of new revenue streams "should also be guided by his “moderate and modest” campaign promise to not raise property taxes above the rate of inflation" -- a promise that is neither "moderate nor modest" when it will directly lead to cuts to services that marginalized and working-class communities disproportionately depend on so as to keep homeowner tax rates artificially low.

As just one example of what this approach results in we need only look to Tory's first budget -- passed with the support of all of council's alleged "left" -- which, as I pointed to at the time, contained "an annual property tax increase on the average Toronto home of only $83,  a figure that is lower than the recent $93 annual TTC Metropass fare increase for transit users, which is a truly telling and shocking fact."

The whole austerity regime and its consequences are reflected in the truly grotesque decision by the TTC board to implement a series of new fare rules for youth that are basically guaranteed to result in the harassment of kids and in pushing casual family users of the TTC back into cars. These new ID requirements are certain to be a bureaucratic nightmare and it is highly probable, as is usually the case in these idiotic attempts to scapegoat people as "cheats", that the implementation will cost more than any "savings" it will bring for what is by the TTC's own admission a rather small financial issue when compared to throwing billions away on white elephant subway lines! The rules are so poorly thought through that they seem to have ignored the likely to be disastrous results of trying to demand IDs from 10, 11 and 12 year olds, or the impact on such riders as tourists or visitors to the city who will not have these IDs.

But this is what happens when public policy is motivated by crass political narratives as opposed to what is fair or efficacious.

Now heading into the midway point of his first term, and no doubt greatly emboldened by the lack of any effective or coherent  opposition to his policies, Tory's real agenda is coming into its own. We can anticipate that this is merely the beginning of what is likely to be a very serious series of attacks on public services across the city.

Posted by Michael Laxer at 8:43 AM