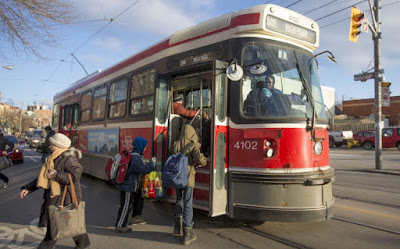 This new system will be backed up by TTC security that are paid handsomely to police the minuscule problem of fare evasion, basically guaranteeing abusive and confrontational interactions between fake cops and children and their parents.

Anyone who thinks this new regime of crass fare intimidation will have an equal impact across social, class and community lines knows little about them.

This is truly, deeply, madly wrong-headed and is a sad reflection of how desperate Councillors and the Mayor are to deflect their terrible decision making and boondoggles -- like throwing billions away on a single stop subway extension -- by making kids the target.

"Progressive" politicians like Joe Mihevc helped make the case for this by actually pretending fare evasion is a serious issue,

Now it has been taking to a farcical extreme.

Are we really going to harass 10 year olds for an ID?

Are we really going to demand 13 and 14 year olds get off a streetcar if they cannot find or do not have an ID and cannot pay the full fare? How about young women? How about in a storm? How about at night?

Are we really going to demand parents riding with their child prove a 10 or 11 year old is 10 or 11 years old?

Are we really going to demand TTC ID for kids of casual users, who will basically then never take their kids on the system but get into cars instead?

Is this sick farce actually happening in Toronto?

Has anyone thought this through?

This is as low a moment as this city has ever hit in terms of tansit and it will not end well.

True to form Mihevc opined on this:


“There has been frankly too many teenagers taking advantage of this system. Some controls are necessary,” he said. He added that requiring younger kids to have Presto cards is “good training for them.”

Do folks like "chief customer officer Chris Upfold" actually want to claim somehow “Because if it gets to a stage where it actually becomes unsustainable, then people are going to lose that discount,” when by people he means kids?

Have we lost all perspective in our grotesque rush to pass the buck for what really ails the system -- generations of chronic underfunding and terrible choices like the Scarborough subway?

But now the direct victims of these choices will be kids.

Good job John Tory. Good job council. Hope you are proud. And unless you stop this hope you are proud when the inevitable incidents of kids being left at stops, young women being told to get off at night or 11 year olds being bullied by TTC security occur.

You will be directly responsible.

Posted by Michael Laxer at 9:49 PM