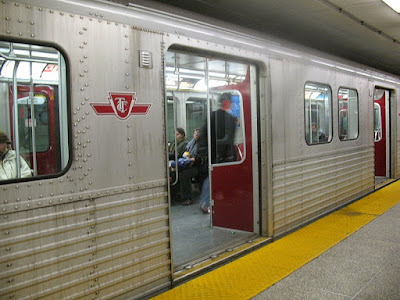 In the wake of the news that the one-stop extension of the Scarborough subway would cost almost a BILLION dollars more than originally anticipated and would come in at at least a staggering $3.2 billion (for one single stop) Mayor Tory and other supporters of this increasingly unjustifiable fiasco are doubling-down on the dumb to try to justify it.

Mayor Tory went to the extent of writing a rather lame op-ed in The Toronto Star wherein the only serious justification of continuing with this plan -- as opposed to the several LRT lines that could be built instead and that would service far more people in neighbourhoods increasingly marginalized not just socio-economically but by issues exactly like inadequate transit infrastructure --  is that not doing so would hurt the reputations and images of those who have supported it!

Given how much Toronto civic politics has been centred around personality and short-term, dead-end politically opportunistic "thinking" it would seem we are on track for the plan, which was approved again by the Mayor's Executive Committee, to continue full speed ahead towards yet another transit disaster for the people of Toronto and Scarborough after Toronto City Council begins a new session on July 12.

In a by-election that has singularly failed to get any attention, Michael Ford is clearly cruising to what is likely to be an easy victory July 25 that will be based entirely on family name.

While two other candidates decried this on City-TV News there is little reason to think Toronto's long-standing and sad history of power-broker backed (and not by any means just on the right) and ultimately voter approved nepotism will not continue on given the lack of serious contenders with the kind of clout or name recognition that would be needed to defeat a Ford in their stronghold.

New Democrat Christopher Strain did manage to get some press when he cleverly issued a challenge to Ford for a one-on-one debate (which Ford, of course, declined on the not entirely unjustified grounds that any debate should involve all candidates). While his website remains strikingly policy light Strain is, at least, strongly opposed to the Scarborough subway.

Two other school board by-elections are continuing and will be held July 25.

In TDSB Ward 5 (York Centre) there are several candidates running on actual platforms in the race to fill the spot left vacant by the sad death of leftist Howard Kaplan -- though none of them seem to remotely have his approach and philosophy, which was fueled by a serious and genuine commitment to social justice.

Erica Shiner is running on a to date vague -- though progressive in tone -- "platform" and has a solid chance to join Moise on council at least in part, again, due to family name. She also benefits by contrast with her opponents.

Nina Zaslavsky has some backing and worked previously for two City Councillors. Her platform, such as it is, consists of three planks one of which is the truly terrible idea to have police officers stationed in every school -- a policy if adopted that is far more likely to lead to the abuse and surveillance of students than it is to help "protect" them.

Jordan Glass came in second to Kaplan in the last TDSB election in Ward 5. While Glass has framed his campaign around fighting for students with special needs and is a supporter of LGBT inclusion, he also talks in very right-wing tones about "fiscal accountability" and cities the odious Fraser Institute in his totally wrong-headed call to allow parents to be able to choose the schools they want to send their kids to. This is a deeply reactionary idea that would do nothing but ensure the entrenchment and reinforcement of marginalized communities remaining marginalized within our public education system and is little more than a right-wing fantasy that in reality would be a nightmare.

There is also a contest for TDSB Ward 1 going on, but on that front I can offer very little information. None of the candidates have websites or even Facebook pages with one exception, a candidate who appears to be affiliated with perennial candidate Kevin Clarke. I can also find no reporting on the race to fill Michael Ford's vacated spot. Given that this means an entirely random candidate whose views are not widely known may get elected by default, this is somewhat disturbing.

All candidates in these by-elections can be found on the City of Toronto website.

We have already touched on the dangerous situation unfolding in Peel where the police and their chief are OPENLY defying their civilian and elected overseers as if we live in a police state.

Now the chief and senior police officers are publicly calling on the progressive Chair of Peel's Police Services Board to resign, which is a disgraceful attempt to interfere in the democratic process. So far the Mayors of Brampton and Mississauga are resisting this. This needs to be closely watched, as were the police to succeed, when it really should be the chief herself resigning, it would set a terrible precedent and signal that the Peel police can basically set their own rules and agenda.

A potentially very exciting new leftist political initiative has been started by activists in Toronto. Called People's Choice 2018 they have launched after a first meeting with the following statement on Facebook:


The People's Choice 2018 Campaign is fighting to elect candidates from Toronto's working class wards to City Council and drive forward the People's Platform. This consists of an $18/hr minimum wage, fare-free transit, and a rent freeze for all Toronto tenants.
We are socialists
We are environmentalists
We are anti-racists
We are feminists
We are union members
We are community activists
Join the fight for a better city for all of us!
[email: peopleschoice2018@gmail.com]

We need a front like this to help offset the institutional support from organizations like the Labour Council for the say and do-nothing progressive politicians we have now and to build a serious alternative to the right.

Join their Facebook group to stay up-to-date and for information on future meetings and rest assured I will be reporting here on developments and news as this unfolds.