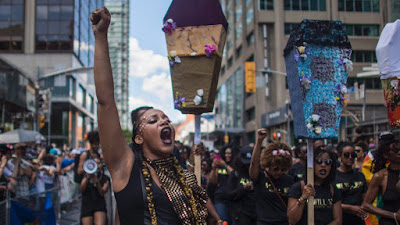 As always seems to be the case when racialized and marginalized communities stand up for their rights in any visible way whatsoever, an endless stream of facile and specious narratives arise based around logically false equivalencies or simple stupidities which are used as a cover for what amounts to racism

One might note that the BLM protest was entirely peaceful and stopped the Pride parade for all of 30 minutes. Based on some of the reaction you would have thought it was a terrorist attack!

I already wrote about some of the absurd and offensive responses from the usual reactionary suspects like the odious Margaret Wente and the Toronto Sun's in-house political simpleton  Joe Warmington.

BLM Toronto co-founder Janaya Khan wrote powerfully and movingly of how BLM in Toronto is very much a part of the broader LGBT movement which is what made the time and place of their action totally appropriate. as well as about the awful and viciously racist backlash they faced,.

Khan also pointed briefly to one of the most absurd narratives to flow out of the whole affair -- that being the notion that preventing a police float from being in the march would somehow be "exclusionary" or "discriminatory".

The high school logic class false sanctimony at play here runs along the sad old liberal lines of "Pride is supposed to inclusive and not letting the police march is not inclusive" which sounds good if you forget we are in a society with a history and a legacy of racism and if you somehow pretend the police are a group that can be discriminated against.

Which they cannot be. It is even more stupid than the usual cries of "reverse racism" or moronic nonsense like trying to claim that anti-Islamic bigotry is not racist because "Islam is not a race".

They have both historically and in the here-and-now been racist, colonialist, homophobic and misogynist.

That they have been forced to include (and they were forced, make no mistake) members of groups that have suffered under the yoke of these systemic injustices changes nothing. That specific officers may not be racist also changes nothing, in the same way that specific white people not being racist changes nothing about systemic racism.

There are no lives that matter more to the state than "blue lives" as is clearly seen across North America as time-after-time obvious and egregious cases of racist or other murders or brutalization by police officers go almost entirely unpunished. Any type of action against or conviction of police officers in even the most obscene instances are almost unheard of.

In fact, as we just saw in the wake of the G20 Toronto police riot, the police can violate the civil rights of thousands of people publicly and openly with almost no consequence at all.

And everyone knows this so lets cut the bullshit.

The police have served to enforce discrimination and inequality and they have far from turned the page on this with their members, chiefs and officers continuing to support and extol practices like carding that have been demonstrated to be racist.

Until the police unions, membership and leadership have actually disavowed these ugly and vile practices and demonstrated that they are actually committed to a non-discriminatory kind of policing (and I am not convinced that this is necessarily possible at this moment in history) it is an affront to those groups that they actively oppress daily to think that the police should be partying it up in parades without some who see the actuality of the jackboot questioning this.

When people talk about the virtue of inclusion, if they actually mean what they say the police are an obstacle to that goal and a very active one.

Instead of decrying and being enraged by non-violent protests by Black Lives Matter, why not stand in solidarity with them in the face of actually violent, often deadly and overtly discriminatory actions by the police and demand societal redress and justice for this?

I think we all know the answer as to why so many white people get so up-in-arms about the former but say nothing at all about the latter.


See also: Black Lives Matter is right -- The police are the oppressor

See also: Part of the problem: Talking about systemic oppression