"Far to the left of the NDP, far greener than the Greens" -- New leftist party launched in BC 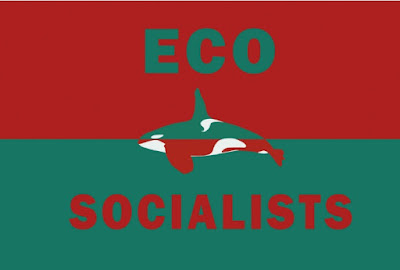 Calling themselves "Far to the left of the NDP, far greener than the Greens", a group of activists in British Columbia have launched a new leftist initiative and party, the BC Ecosocialists.

According to their website, the party is needed as they "reject the notion that the BC NDP and the BC Green Party are left wing, or Green. Let’s face it, the BC NDP and BC Green Party stand for a set of environmental and social policies pretty much the same as those of George H W Bush’s presidency (1988-92), Brian Mulroney’s conservative government (1984-93), Bill Vander Zalm’s Social Credit Party (1986-91) and Gordon Campbell’s Non-Partisan Association (1986-93). We do not believe that conservative policies from the 1980s are left-wing."

Unlike the NDP-Green coalition that governs the province they "want to tax rich people and corporations to fund better policies, like building tens of thousands of units of public social housing, employing people to build new green energy and transportation infrastructure, and stopping all new fossil fuel infrastructure, including all LNG. We would also stop Site C, and close the coal mines."

They lay out their initial policy proposals on their Policy page while also answering questions like "But you know you can’t win under this voting system. Be practical! Why are you doing this?" and "Why are you splitting the left wing/environmentalist vote" on their FAQ page.

To learn more or get involved you can check them out at: http://www.bcecosocialist.ca/

Posted by Michael Laxer at 3:15 PM