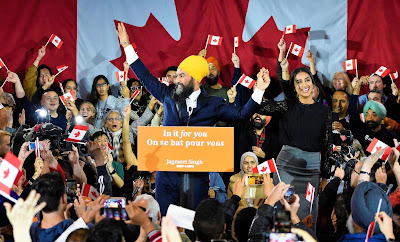 Sometimes, in life and politics, you can forgive folks for indulging in positive thinking even when it is totally out-of-touch with reality. In many cases this is relatively harmless.

But not when the partisans of a party that holds much of the Canadian left seemingly prisoner to its electoral ambitions try to sell a truly disastrous defeat to people as a "victory" of some kind.

Only a short week ago NDP partisans were insisting that a huge surge in support for Jagmeet Singh and the NDP was happening despite the fact that there was no real evidence that the party had done anything more than spike upwards a few percentage points in the polls. The absurd claims of some aside, nothing akin to the "Orange Crush" was occurring for the obvious reason that the two largest factors in that -- the collapse of the vote of both the Liberals and Bloc Quebecois  -- were not in play.

The surge has been proven to have been wishful thinking.

This is a more forgivable kind of "making the best of things" as it is understandable for the hardcore supporters as well as the organizers and candidates of a party to put as positive a spin on the situation as possible before election day.

Many NDP partisans now, however, are trying to spin losing over 600,000 votes and 20 seats as actually a victory.

The "logic" behind this is that Singh and party went into the campaign with matters looking even worse and due to an "amazing" election performance they staved off collapse. And now the NDP even "holds the balance of power".

First, "we did better than the worst case scenario" is hardly an appealing or convincing line for anyone not already a part of the party's groupthink culture.

But beyond that only in this culture could what happened in this election possibly be spun as a victory and that is not meant as a compliment.

It is actually deeply harmful to the NDP's own interests in both the short and long term to continue with this line which is transparently false.

Among other things, even if Singh did have a good couple of weeks -- which he did -- this line acts as if the party somehow stumbled by accident into or was blindsided by an election that it knew was coming for four years. They even knew what month it would be coming. Being ready for a campaign with a preset date is also part of the campaign. The attempt to obfuscate this now exposes several deep seated issues within the NDP internally that we have looked at before on The Left Chapter and that NDP partisans generally refuse to acknowledge.

Further, this absurd line also prevents any serious attempt to analyze self-critically and determine what went so obviously wrong.

It is not even clear that the NDP does hold the balance of power for reasons very well outlined in the piece MINORITY GOVERNMENT: STRONG EXTRA-PARLIAMENTARY MOVEMENT NEEDED TO FORCE GAINS. In any case, the Liberals being in this situation did not come about as a result of the NDP losing seats, it came about due to the Bloc and Conservatives gaining them. Not much "victory" to be had in that.

Many NDP partisans four years ago tried spin 2015 as not as big a catastrophe as it was. We looked as this at the time on The Left Chapter in posts like Doubling down on disaster and Delusion continues to rule the day in Mulcair NDP.

The line about how it was not so bad as the NDP "had its second best result ever" was delusional in 2015 as the "victory" line is delusional now.

No matter how you want to spin it, losing 600,000 votes and 20 seats since 2015 and 1.7 million votes and 79 seats since 2011 is not a victory of any kind. The sooner people wake up to that the better it will be in coming to an analysis that can actually help the Canadian left move forward.

Update: Since this was first posted Trudeau has ruled out a coalition. With 3 parties "holding the balance of power" and with Trudeau only needing 14 votes to pass legislation this was totally predictable. Again, this exposes the NDP "victory" line for what it is.

See also: The NDP's election disaster shows again the need for something new on the left