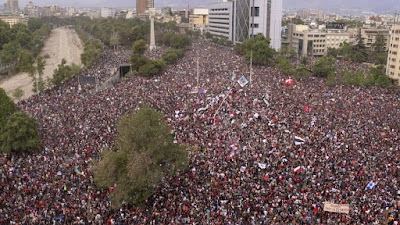 Over one million people are marching in the streets of the Chilean capital, responding to the convocation of students and labor unions who organized on social media "The Largest March in Chile" on Friday afternoon, with rallies paralyzing major cities.

- "the right to live in peace".
Victor Jara.

One million in the streets of Santiago, Chile today to protest the austerity program of the right-wing Pinera government and the army/police repression of the people!

In Chile 2,138 people have been arrested, including 243 minors and 407 women, 9 of whom were stripped during police procedures, according to the National Institute of Human Rights (NHRI).

The popular movement against Piñera’s neoliberal government and its repressive policies, is unprecedented in Chile’s modern history, and it has grown stronger following the beginning of a 48 hours general strike called by several social organizations.

Day 7. Santiago. Over 500 thousand in the streets. 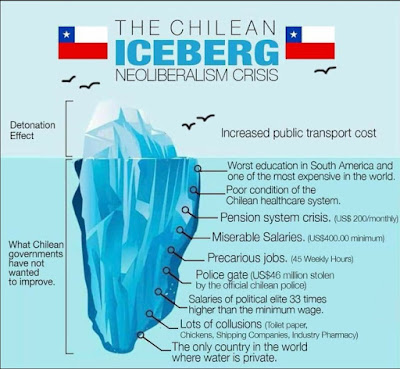 Latin American is rising up against Neoliberalism.

The National Institute of Human Rights in Chile (INDH) has confirmed that they have received cases of possible torture at the hands of the authorities amid protests that began against public transport fare hikes but have extended into an uprising against President Piñera’s neoliberal policies.

Countless symbols of neoliberalism came under attack during protests in Chile over the October 18–20 long weekend.

5) In Chile, Protesters Continue To Defy The President And Military

Massive protests have continued over economic inequality in Chile this week, defying the president and security forces' efforts to restore calm. The widespread and sometimes violent unrest has led to more than a dozen deaths.

Demonstrations have now turned into a general protest against neoliberalism in Chile.

Anti-government protests that have shaken the world’s largest copper producing nation Chile for the past three days have spread to the mining sector as unions call for stoppages.

Chile's National Institute of Human Rights (NHRI) presented on Monday night the latest statistics of detainees and injured since the social protests began on October 17th. According to its report, there have been 1,420 arrests and 84 people wounded by gunfire so far.

8) 'So Awful': Military Returns to Streets in Chile as Unrest Simmers

Demonstrators in Chile continued their "pots and pans" protests Sunday following a week of unrest that saw hundreds arrested and the military patrolling the streets for the first time in decades.

In what appears to be amateur video, here is more footage of military personnel in Santiago yesterday shooting an unarmed protester. 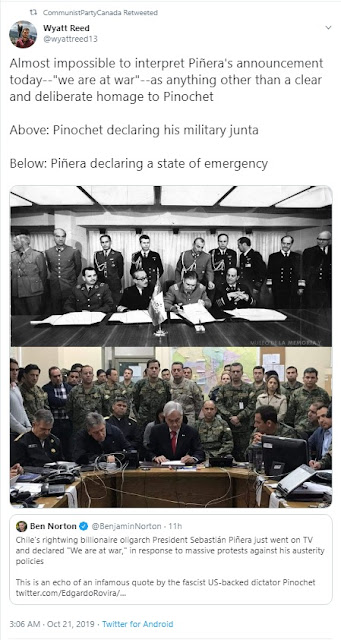 Military shooting people in the streets of Santiago, Chile.

Green parties have made historic gains at the expense of those to the right and the left in elections to the Swiss parliament.

One of the few identifiable issues raised in the Canadian election campaign so far is the need to address the climate crisis. The concept of a Green New Deal has been raised by the left and environmental movements across the continent, in Canada through Greenpeace’s Pact for a Green New Deal and obliquely through the NDP (“A New Deal for Climate Action and Good Jobs”), and the Greens (“Green Climate Action Plan”). Addressing the climate emergency has become a theme for all the main parties, even in the cynical and flawed manner of Justin Trudeau and Andrew Scheer.

Activists in Northern Ireland celebrated the legalisation of abortion and same-sex marriage at the stroke of midnight, as a cynical last-ditch attempt by unionist parties to restore the executive failed. The Stormont Assembly has now been defunct for over two years, prompted in large part by DUP leader and First Minister Arlene Foster refusing to stand aside after being embroiled in the ‘Cash for Ash’ scandal, where businesses were allowed to exploit green energy incentives and gain taxpayer-funded subsidies. RTE reported that some businesses were receiving £1.60 in subsidies for every £1 they spent on energy, and investigations uncovered businesses running up to ten boilers in order to make millions from these subsidies.

12) Everyone Is a Russian Asset

Rather than confront the devastating absurdity of defeat before an ad-libbing game show host who was seemingly trying to lose – a black comedy that is 100% in America’s rich stupidity tradition – Democrats have gone all-in on this theory of foreign infiltration. House speaker Nancy Pelosi even said as much in a White House meeting, pointing at Trump and proclaiming: “All roads lead to Putin.”

Hillary Clinton has kept a relatively low profile since her embarrassing 2016 election defeat, popping up only occasionally to make out-of-touch elitist comments that confirm why she lost. So it was somewhat surprising to hear her weigh in on the 2020 Democratic primary with a truly bizarre comment about (of all people) Tulsi Gabbard.

14) Hillary Clinton called me a 'Russian asset'. The establishment is losing its grip

The McCarthyist smear against the Green party shows the lengths to which Clinton will go to blame others for her 2016 defeat. 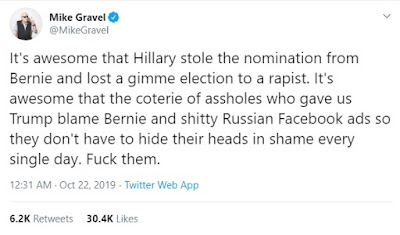 Less than a week before the presidential elections in Uruguay, citizens' support for the Broad Front, Frente Amplio (FA), a coalition of left-wing organizations which is currently in government, is growing and widening its distance from the opposition led by the center-right National Party (PN).

Uruguayans voted Sunday in general elections with the Frente Amplio, which has ruled for more than 14 years as a favorite, but their center-left policies face the challenge of a coalition of conservative parties.

Ahead of Trump’s arrival in Pittsburgh on Wednesday, police arrested 14 people as they held a sit-in protest blocking a bridge near the Shale Insight Conference. The protest was led by Jewish leaders who marched behind a banner reading “Our solidarity will defeat White Nationalism.” It came almost exactly one year after a gunman armed with an AR-15 assault rifle opened fire inside the Tree of Life Synagogue in Pittsburgh, killing 11 worshipers. Just ahead of the shooting, the gunman posted a racist screed echoing President Trump’s language about an “invasion” of immigrants. This is Dove Kent of the group Jewish Action, who led Wednesday’s protest.

MCDONALD’S workers have warned bosses that “together we are powerful” as they announce the biggest wave of fast food strikes Britain has ever seen.

When I wrote my book, Freedom From Tyranny, the “Prague Declaration on European Conscience and Communism”—which in terms of falsifying history ranks up there with the Protocols of the Elders of Zion—was still taking shape.

Mass protests in Lebanon have entered their sixth day as hundreds of thousands around the country are taking to the streets to demonstrate against dire economic conditions, austerity and corruption, demanding the country’s leaders step down. The protests were sparked last week when the government announced a tax on WhatsApp calls, but the massive demonstrations have since grown into a call for revolution. More than a million demonstrators flooded the streets of Beirut, Tripoli and other cities over the weekend. Prime Minister Saad Hariri revoked the WhatsApp tax on Monday and announced a package of economic reforms, but protesters are continuing to call for his ouster. For more, we speak with independent Lebanese journalist Kareem Chehayeb, whose recent piece for The Washington Post is headlined “Lebanon’s protests and wildfires tell the same grim story.”

The Lebanese Communist Party encourages the people to escalate the uprising and calls for a general strike to force the government to resign.

23) Lebanon Protesters Back in the Streets

Protesters poured back onto streets and squares across Lebanon on Saturday, despite army efforts to unblock roads, with no end in sight to a crisis that has virtually shut down the nation for the past 10 days as demonstrators demand the government leaders resign.

24) An inside account of the Indigenous uprising in Ecuador

On Oct. 7, 4000 Indigenous people from towns in and around the same canton marched for four hours to Ibarra to present a manifesto to the governor of Imbabura. The governor refused to meet with them and later rejected their primary demands: Cease the military aggression against Indigenous communities and support their resistance to the “paquetazo” (economic package) ordered by the International Monetary Fund and Decree 883, which removed fuel subsidies.

The Confederation of Indigenous Nationalities of Ecuador (Conaie) on Thursday convened to form a popular parliament so as to outline an economic model and present it to President Lenin Moreno.

Bolivia experienced on Friday a full day of strikes led by opposition groups who were dissatisfied with the results of the presidential elections that took place on  October 20. The election saw an important victory for President Evo Morales who won with 47.08% of the votes.

The Mexican government has criticised the OAS Electoral Observation Mission (MOE) for prematurely raising ‘concerns’ about Bolivia’s elections before carrying out a full audit which the Bolivian government invited them to do.

HUMAN rights activists are to protest outside sportswear brand Puma’s stores, offices and sponsored teams’ events across the world today against the company’s sponsorship of the Israeli Football Association (IFA).

The Canadian BDS Coalition issued a statement on October 22, 2019, declaring victory in the campaign to stop the NBA 2019 champions, the Toronto Raptors, from going as a team on a “promised trip” to Israel. The Coalition noted that the new 2019-20 National Basketball Association NBA season has officially started, and “no reported public team visit” to Israel has occurred.

In the middle of the political crisis that has hit Catalonia for the last eight days, Spanish Prime Minister Pedro Sanchez visited Barcelona Monday, where he expressed his full support to the police officers dealing with the protests and warned them that the current situation will be longspun.

Throughout this election campaign, opinion polls projected the probability of a minority government. It was a scenario that many progressives anticipated with relish, in the hopes that it would provide a strong opportunity for the labour and people’s movements to win meaningful reforms.

(Related: The NDP's election disaster shows again the need for something new on the left)

Prime Minister Justin Trudeau today ruled out a governing coalition and said his minority government's new cabinet will have gender balance when it's sworn in on Nov. 20.

Two days after much of Western Canada rejected the Liberals on election day, Prime Minister Justin Trudeau today vowed to be more sensitive to the needs of Alberta and Saskatchewan and to build the Trans Mountain expansion pipeline in the face of entrenched opposition from environmentalists.

As the votes were being counted on October 21, it quickly became clear that the NDP was not going to see its much anticipated (and expected) breakthrough in Toronto. For the last two weeks of the campaign, polls consistently suggested that New Democrats were on track to win in the downtown ridings of Toronto Danforth, Parkdale-High Park, and Davenport. In the end, it wasn’t even close – the Liberals won the first two ridings by 8000 and 10,000 votes, respectively, and held Davenport by a close-but-comfortable 1500.

(Related: The election results in Toronto tell a story the NDP does not want to hear)
Posted by Michael Laxer at 9:22 AM