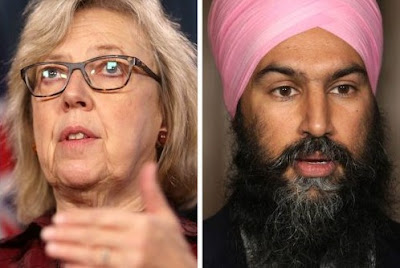 August and September saw 65 posts of various kinds on The Left Chapter.

These included new installments in our always popular vintage photography posts like Olympic Soviet Kiev -- 12 Panoramic Views of the City 1980 and 17 Panoramic Views of Soviet Kharkov 1984. There were, in addition to the ones on the top six list, a number of political posts that came close to making the list like "The problem is capitalism. The solution is socialism." -- Communist Party campaign launches in Toronto and Corporate names for public stations are as dangerous as they are idiotic and absurd.

We started our weekly Canadian federal election roundups the most recent of which was PPC Goes Ever Lower, Climate Fails, Brownface Aftermath and more -- The Left Chapter Canadian Election Round-up Week Three. We also launched a new feature called the Daily LIFT the first of which was "Hey, quit that! Ain't you fellows got the vote?" -- Daily LIFT #1.

Our number one post (in terms of hits) was from a contributor. Thanks very much to all our readers and contributors.

Without any further ado, here are the top six posts, in terms of hits, from August and September.

The president of the Saint John East provincial Green Party riding association has stepped down from his position late Sunday night. In a Facebook post Kevin (Kage) O’Donnell blasted the Greens for being what he described as “a party that allows people who promote...racism”

Just over two months ago the Parkdale NDP engaged in an epic debacle of a nomination meeting whose optics were appalling by the standards of any observer outside of the party who is not a bigot. The photos from it, frankly, are shocking and we have looked at them before on The Left Chapter in several posts.

NDP leader Jagmeet Singh's powerful comments on Wednesday night about the Trudeau brownface controversy need to be heard in full. Since the photo came to light many have sought to diminish the racism inherent in wearing blackface or brownface and seem oblivious to the pain and hurt it causes for people who have faced systemic racism their entire lives.

Sometimes, in politics and messaging, less is more. That is certainly a lesson the folks leading the shitshow at the federal NDP HQ might want to learn. Fast.


We have little more to add on the ugly reality of the NDP's dictatorial streak and drive as well as exposing the travesty regarding Sid Ryan, but it is worth sharing this post by Janet-Lynne Durnford who was trying to run for the NDP nomination in Simcoe North.

Two months have passed since the utter, shameful debacle that was the Parkdale NDP's federal nomination meeting and there have still been no serious answers or explanations as to what happened from the federal NDP power brokers.