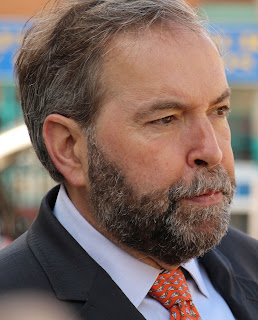 As part of Tom Mulcair's bid to eschew any hint of anti-capitalist radicalism on the part of his no longer Socialist even in theory New Democratic Party, he made a pilgrimage the other day into the heart of the Bay St. beast, Toronto's Economic Club, to attempt to allay any remaining fears that the titans of capital may have that he might do anything at all that would meaningfully threaten their power or profits.

After touting his deeply reactionary and totally unnecessary so-called "small business tax cut" (which is not really much of a tax cut for small business at all) and prattling on about the "middle-class", promoting growth and helping the manufacturing sector, he also took what seems an almost de rigueur swipe at Ontario's first, and so far only, NDP Premier Bob Rae for having failed to balance the books while in office -- in contrast, allegedly, to all those other fiscally responsible NDP provincial governments historically.

To much amusement and laughter amongst his audience comprised of the very same capitalist elite that worked so very hard to undermine and destroy the Rae administration from day one, Mulcair quipped that in contrast to these NDP governments "There was one exception. But he turned out to be a Liberal."

He echoes similar, previous critiques of the Rae government by others like Brian Topp and Andrea Horwath.

The problem is that while there are a great many things that lefties can and should be critical of Rae's capitulationist regime about, the fact that it chose to place services and jobs ahead of balancing the budget during the economic downturn of the early nineties is absolutely not one of them!

Rae's choice on this front was completely correct both from an economic and human point-of-view. It was a decision identical in its thinking to the demands for greater stimulus spending that led to the ill-fated coalition agreement between Jack Layton and Stephane Dion.

In fact it is the same reasoning that lies behind Mulcair's own finance critic's criticism of the Conservative government's fixation on deficit reduction.

It is a basic part of Keynesian, progressive or social democratic economic thinking that tries to not fight recessions on the backs of the people and to stimulate recovery through spending and it stands in stark contrast to neo-liberal ideas around austerity.

In the context of the time Rae was right to do what he did on this front.

Within the capitalist paradigm balanced budgets do avoid over-reliance on loans that do place governments in a situation where they are indebted to and sometimes beholden to capital. They also can cost government greatly in terms of interest paid to service existing structural debt. (Ontario pays $10 Billion a year to service its debt for example, which could be put to much better uses.). So there are valid reasons for left-wing governments to seek to avoid debt. (One notable tool in doing so, personal tax increases, especially on the wealthy, is something that Mulcair is actually opposed to).

But during an economic downturn, having a balanced budget as a principal or even secondary immediate goal makes some form of austerity measures inevitable and makes very harsh cutbacks to services and public sector jobs almost certainly necessary.

The problem is not the desire to balance the books when possible -- it is the fetishization of this as a primary economic goal to which government should aspire regardless of circumstance.

Continuing to portray Rae's decision as fiscally irresponsible and to laugh it up with the barons of Bay St. about it is not only wrong but also really does the left no favours in the event that they find themselves in power during a future downturn. Especially if politicians like Mulcair make what seem to be commitments to keep the books balanced even when the economy is in a tailspin, as it was in Rae's era.

Mulcair should keep this in mind given his aspirations. He might not find it not so amusing to be on the receiving end of a Bay St. intimidation campaign should he be Canada's next Prime Minister.
Posted by Michael Laxer at 1:17 PM