Reinforcing male privilege -- The Trudeau cabinet, Andrew Coyne and the mythology of "merit" 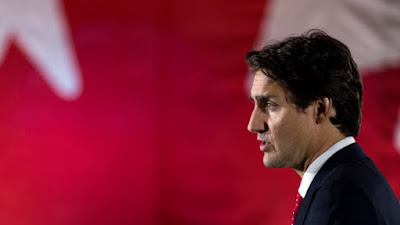 You really have to love it when the beneficiaries of the greatest social assistance program in the history of Western Civilization and Canada -- the one that did and has rewarded white men for having been born white men since the day the country was founded -- talk about "merit" to bemoan newly elected Prime Minister Justin Trudeau's decision to make his cabinet have an equal number of men and women, thereby reflecting the actual gender composition of the country.

As is always the case about efforts to redress historic injustices it is met with cries of outrage about "quotas", "reverse sexism" and a bunch of other total rubbish.

Usually, as Andrew Coyne did in the National Post, they pay lip service to the fact that no past cabinet was ever based on anything remotely like merit and, in fact, had an outright quota system that ensured that all positions of power in both our government and society as a whole were 100 per cent held by white men, but they will not then accept either that these systemic biases continue to this day or that anything done to reverse them has any merit.

The injustices do still exist and it should come as absolutely no surprise that those like Coyne, who are in no small part where they are due to the cosmic crap shoot of birth that has a lot less to do with their own merits that they might care to admit, will then go on to pontificate in ways that serve to obfuscate their own profound privilege.

There is little doubt that positions of power in our economy and politics are greatly skewed and that white men remain the overwhelming beneficiaries still of the ultimate example of societal welfare.

Take the corporate world. As Kate McInturff , a Senior Researcher with the Canadian Centre for Policy Alternatives noted in 2014:

What makes the top 100 CEOs different from the rest of us (aside from the money)? For a start, they are almost entirely men. If the top 100 looked like the rest of working Canadians then 47 per cent of them would be women. In reality only 3 per cent are women.
In a recent survey, senior Canadian executives suggested that a lack of qualifications was the reason for the absence of women at the top. Yet two in five business post-graduates in Canada are women. Senior executives suggested that women were less ambitious than their male peers. Yet, 81 per cent of female MBA graduates seek corporate jobs following graduation. For those women who do manage to get their foot in the corporate door, there is no lack of hours to work. It's their pay that looks different. Women with MBAs earn $8,167 per year less than their male colleagues in their first jobs after graduation. And the pay gap, here as in every other field, just keeps on growing as they enter their 30s and 40s.

Note that here too, of course, the claim of "merit" and "qualifications" are used as a lie by male executives and their apologists to buttress the argument for doing nothing about the very real male privilege that still exists in their world.

Never mind that, as she also notes:

It would take the average working age woman in Canada 235 years (or 85,778 days) to make as much as one of these CEOs makes in a single year. It would take a first-generation immigrant woman 268 years to do it. Visible minority women and Aboriginal women would have to work the longest, at 273 years and 285 years respectively.

Or take the fact, as noted in the Globe and Mail that when it comes to the persistent gender based pay gap:

After decades of narrowing differences in pay and labour-force participation rates, momentum has stalled, with some measures deteriorating in recent years. Canadian women still take home on average 73 cents for every dollar men earn, even as educational attainment has surpassed their male counterparts. The gap remains when controlled for measures such as occupations and hourly wages.

In politics this same pattern has, of course, played out, and to such a degree that even Wikipedia, when commenting on the lack of women in leadership roles in Canadian politics, has come to the conclusion that:


This dearth of women in political leadership may, in some ways, be attributable to women's general exclusion from important cabinet positions that are seen as stepping stones to leadership. Women were largely excluded from Canadian cabinets until the 1970s. Only in rare instances do women comprise a significant proportion of Canadian cabinets, as in the case of then-Ontario Premier Bob Rae's first cabinet in 1990, in which 11 of 26 ministers were women. As of July 2013, the Harper Cabinet had 11 female ministers in a cabinet of 39, though most hold minor portfolios.

"This dearth of women in political leadership may, in some ways, be attributable to women's general exclusion from important cabinet positions that are seen as stepping stones to leadership." I think this needs to be emphasized as it points to the basic and grotesque hypocrisy and contradiction at work when primarily white male commentators pen these types of apologias for historic sexism.


But nothing we have seen before can quite compare to the course the Liberals have embarked upon: an explicit 50-50 gender quota. This is not an objective or a target; not a balancing of merit and other considerations. It is a fixed rule, to be adhered to come what may.

And yet he himself, now obviously forgetting this in the typical way, already acknowledged that we had very much seen something that "could compare" -- the historic, and far more dramatic and exclusionary, white male quota!

Only now, when a Prime Minister seeks to actually upend the quota imposed on our society by white men for the benefit of white men do white men suddenly care at all about "merit"!

Where were all the white men whining about this when only, or virtually only. white men (and rich ones to boot) were the bulk or entirety of basically every cabinet in Canadian history?

That certainly was not based on merit! It was based on sexism and racism. It was only not considered a quota as the white men running the system had constructed racist and sexist narratives that claimed that only white men had the alleged "qualifications" necessary.

So folks like Coyne need to cut the false, self-serving sanctimony and bullshit. Trudeau's plan is not a quota, it is an effort to include voices deliberately excluded from being heard for the entire history of our country and perspectives that have been deliberately kept out of the real power positions of our government. Voices and perspectives that came from half the population.

The fact that countless white men were afforded positions of power and privilege not due to any merit but due solely to being white men is now supposed to be simply forgotten and ignored according to the Coynes of our discourse. It is a call for little more than business as usual and a call not for merit but for continuing the white male hegemony that defines "merit" solely in terms of the privileged qualities that its male commentators see in the mirror.

Posted by Michael Laxer at 8:05 PM