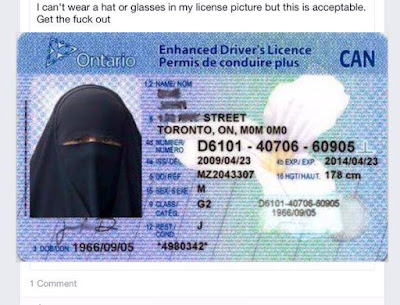 Have you seen this meme circulating around Facebook and the internet the last few days?

It purports to show a woman on an Ontario driver's licence  wearing the niqab -- a religious headdress a very small number of Islamic women in Canada wear and that is being shamefully used by some politicians as a dog-whistle in the current federal election.

Usually the meme will be accompanied by countless outraged comments and idiotic hand-wringing about "Canadian identity", "values", "this would never be allowed for us" etc.

Well, the meme is total photoshop bullshit. First the licence clearly has the sex as male. But, more importantly, you cannot get a driver's licence issued in Ontario with a photo that has you wearing a niqab covering your face.

From the Ontario government's webpage related to this:

As of May 2013, you only need to renew the photo on your driver's licence every 10 years. If you need a new photo, you need to visit a ServiceOntario centre to have one taken.
The picture on your photo I.D. must be:
completely visible
free of any obstructions
a neutral expression
Headwear worn for religious or medical reasons can be worn, but must not cover any part of your face.
You may be asked to remove any head or face wear (e.g., eyeglasses) when taking a photo for government-issued identification.

There are very real issues in this election. The niqab is not one of them. And sharing racist, dog-whistle, inaccurate rubbish like this is a disgrace.

Email ThisBlogThis!Share to TwitterShare to FacebookShare to Pinterest
Labels: niqab