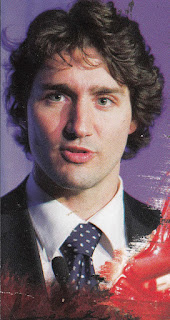 Warning: While necessary to the content of the piece, this post contains some disturbing and very graphic images.

The extremist anti-abortion group, the Canadian Centre for Bio-Ethical Reform, (CCBR) has been distributing leaflets and demonstrating around Toronto lately. Recently they targeted my west Toronto neighbourhood of South Etobicoke both distributing their leaflets door-to-door and demonstrating at a local intersection as well as, disgracefully given the imagery they use, outside of a local high school.

Their leaflets are grotesque and profoundly misrepresent abortion in Canada, a point to which we will return. They also specifically target Liberal leader Justin Trudeau -- and it is no coincidence that they are being sent out in a riding that is held by a Conservative but that has more often gone Liberal in the past few elections both provincially and federally.

Justin Trudeau, in one of his finer moments as Liberal leader, made the party explicitly and unequivocally pro-choice. In 2014 he stated:

“I have made it clear that future candidates need to be completely understanding that they will be expected to vote pro-choice on any bills,” Mr. Trudeau said Wednesday, a day before a major anti-abortion rally is set to take place on Parliament Hill. “… For me, it’s a debate that has been settled for the vast majority of Canadians and we don’t need to reopen that issue."


Prior to this the party had allowed anti-choice votes by members of its caucus -- members such as anti-LGBT equality rights and former Liberal MP Jim Karygiannis who has, unfortunately, gone on to become a Toronto City Councillor.

Obviously this has greatly angered the anti-choice movement as it left only one major party in parliament where caucus members were allowed to oppose women's reproductive rights, the Conservative Party (and government). (The NDP has been explicitly pro-choice for many years now.)

In the leaflet, reproduced here, Justin Trudeau is literally portrayed as having blood on his shirt and collar. This is done next to an alleged image of an aborted fetus and above the slogan "Justin Trudeau Supports Abortion Until Birth". 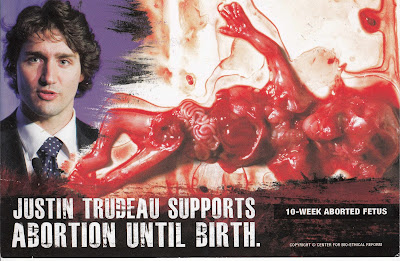 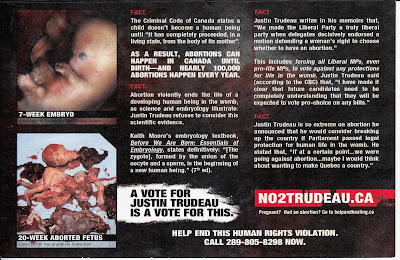 The leaflet states that "Abortions can happen in Canada until birth - and nearly 100,000 abortions happen every year". It later states "A vote for Justin Trudeau is a vote for this" next to a highly dubious image of an alleged aborted (and supposedly disemboweled and beheaded) 20-week old fetus.

To call this framing of abortion in Canada profoundly misleading would be an understatement.

As the University of Ottawa notes:


Over 90% of abortions in Canada are done in the first trimester; only 2-3% are done after 16 weeks, and no doctor performs abortions past 20 or 21 weeks unless there are compelling health or genetic reasons. The risk of maternal mortality is probably greater in carrying a pregnancy to term (7.06 per 100 000 live births) than the risk associated with abortion (0.56 per 100 000 terminations)

To make this perfectly clear, "20 weeks is the cutoff for elective abortions according to the Canadian Medical Association" which means that any performed after this point are only done where the health of the mother is at risk or where the fetus is no longer viable or will not survive for any meaningful length of time after birth. The notion that abortions "can happen in Canada until birth" is simply false unless one is including abortions that are an established medical necessity.

Further, the overwhelming percentage of abortions in Canada occur prior to 16 weeks, with the greatest percentage of those occurring prior to 12 weeks. Only 3.3% occur between 17-20 weeks while only 1.9% occur after that -- all of which would have been non-elective.

This disgraceful imagery, which, even if real, attempts to shock with medical photographs that are completely de-contextualized (virtually any medical procedure could similarly be made to look shocking and disturbing presented a certain way) is also used by the group on the protest signs they carry at their demonstrations, including the ones outside of schools.

While I suspect that these tactics will backfire, they still need to be roundly condemned and so should the targeting of Justin Trudeau.

In ridings where there is a Conservative incumbent, such as mine (Bernard Trottier), the MP should be contacted and asked to state publicly where they stand on the leaflets and women's reproductive rights.

The attack on Trudeau should also be forcefully condemned by New Democrats and leftists generally. Against them specifically he deserves our full support. While, especially with an election on the way, it is fashionable in some quarters to claim that the Liberals and Tories are the "same", on the fundamentally important issue of full and unequivocal support for women's reproductive rights and freedoms they are not.

These rights and freedoms are under constant attack across North America and there are outright opponents of them within the government caucus. Attempts to limit or in any way hinder access to abortion also, as the Critical Social Work Journal noted "most drastically affect marginalized women, “particularly those who are low-income, women-of-colour, immigrant or refugee women and those who do not speak English or French”"

The issue is not a peripheral one. It remains a critical battleground in the fight for women's rights and social justice and equality.

Opponents of these rights will stoop to any low to try to undermine them. We cannot allow them to succeed.

UPDATE (06/06/15): A local City Councillor, Mark Grimes, released a statement regarding the material being in distributed in South Etobicoke, among other places. In the statement Grimes notes that there is little that he can do as a Councillor and that the police have informed him that the leaflets do not constitute, hate speech, which they do not.

People who are opposed to these grotesque leaflets should express this by protesting them to their local Conservative MP and by calling on elected officials from all parties to publicly condemn them as both profoundly misleading and as a truly sickening attack on Justin Trudeau.

While the leaflets are disgusting, Mr. Grimes is correct that they are not illegal and they need to be opposed politically through political action, not legally.

Update July 31, 2015: This disgusting campaign has been expanded nation-wide. Media reports are coming in that they are being delivered coast-to-coast in certain swing ridings in  the following misleading envelope: 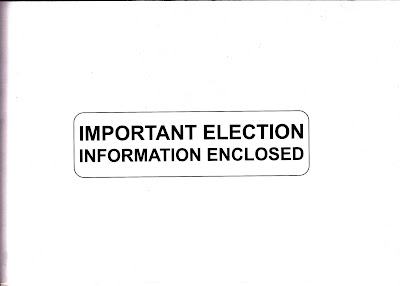 Posted by Michael Laxer at 3:41 PM