A Farewell to a Bookstore “The problem with books is that they end.” -- Caroline Kepnes

Back in November, 2001 my partner Natalie and I stood together holding hands looking around a large empty retail space that was to go on, the next month, to become the used bookstore that would be a central part of our lives for the next 14 years. At our feet in his car seat was our newborn son, Nathaniel, not yet a month old.

Even then we knew it was the start of an amazing new chapter and adventure in our lives.

To us the space that evolved was always simply known as "The Store". For its first near 8 years it was formally called Used Book Paradise and then, after it moved in 2009, Community Roots.

We opened it originally by the corner of Lake Shore Blvd. W. and 30th St. in the Toronto neighbourhood of South Etobicoke at the very start of what would be its slow revitalization. 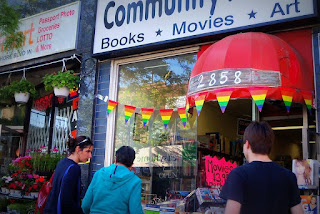 And very quickly the store became a community hub complete with many true characters from all walks of life in this very diverse area. Days were spent stocking shelves and pricing items and doing all of the many often tedious and boring things that one does in retail.

But they were also spent chatting about what science fiction someone liked, what books we thought might get their kids interested in reading, debates about whether War and Peace was "better" than the Brothers Karamazov, searching through boxes brought to us looking at what would soon be out for sale, and too many other wonderful and yet seemingly ordinary moments to mention. 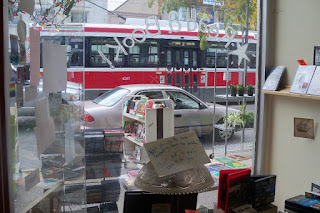 They became, despite how special they were, almost commonplace.

The space was always eclectic. Like the used bookstores I had frequented on Queen St. W. in the 80's and 90's (all now gone) it was a crowded and crazy place with stacks of books on the floors, on the shelves and atop other stacks! Its walls were covered with the art of Natalie (as well as the famous -- or perhaps infamous -- "creepy dolls" she makes) and that of other local artists. It also had copies of the Magna Carta, the Charter, the Canadian Bill of Rights and the countless "Paint-by-Number" and Naval art kitsch prints we collected. 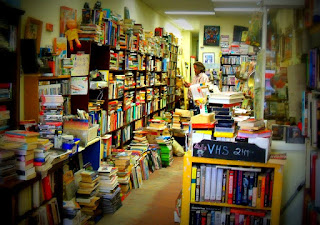 As the years passed the store and our family grew. Our daughter Julia arrived in 2004 and our son Robert in 2007. Our neighbourhood family grew as well as we met many folks who would go on to become good friends. We saw readers who bought Hardy Boys or Mary Kate and Ashley books grow to adulthood and to return seeking out now different books entirely. We saw friends, sadly, pass away and felt the loss of familiar faces that we were not to see again.

The book collection grew ever larger and to it we, somewhat reluctantly, added movies and video games as the books alone were not paying the bills. 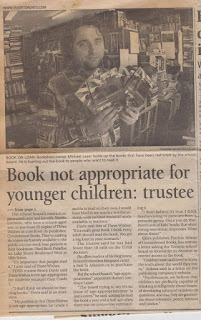 The store became a focus of political and social activism.

Natalie and I wanted it to reflect the values that we hold dear. From fights like opposing Toronto District School Board censorship of the children's book Three Wishes, to trying to be allies to courageous local LGBT activists, to distributing leaflets for the peace movement, free transit, worker's rights and many other causes, in our small way we never shied away from representing what we believed in even if it might have at times cost us business.

Bookstores, after all, are a labour of love. They are not about the money. Or at least ours was not to us.


The store would witness and be the headquarters for two municipal and two provincial campaigns and the site of countless political discussions and arguments.

Every year would see Natalie's Halloween window and my Christmas window. They would see sales and anniversary parties, events and meetings and even birthday parties. 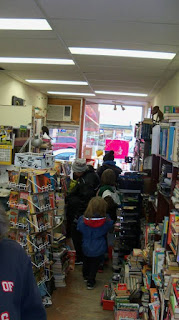 It was like a second home. One that at times we would spend more time in than our real home. Inseparably woven into the fabric of our lives. It has, lately, hit me just how much a part of me and my family this place has been and how much of us literally cover its walls from the art mentioned above to family photos and our children's drawings.

It has also made me realize how sad I am that it will soon all be gone. After 14 years we will close a mere 3 days after the anniversary of our opening.

A bookstore is a special place to be a part of and to work in.


It is an amazing thing to be surrounded not only by the sublime but the ridiculous. To be able to pick up Vikram Seth's A Suitable Boy or read a few pages from the transcendent Sounder and to then peruse a few paragraphs of a Conan knockoff or a really poorly written and raunchy Harlequin. 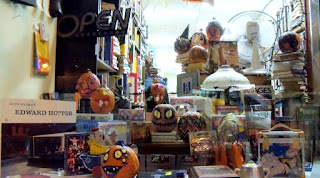 To have Karl Marx, Sigmund Freud, Danielle Steel, Stephen King, Shakespeare, Lawrence Block, Zane Grey and so many, many others be the names that populate your workday and the "product" that you are selling and that your customers are seeking out.

To have a place where Milton Friedman and John Maynard Keynes can lie atop each other or side by side in seeming harmony. 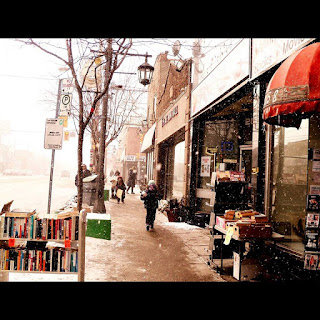 To have this great endeavour that is human learning, culture, entertainment and knowledge and that is so embodied in books be the basis of your job.

But retail has changed and we have changed.

While many have commented on the "decline of the book" of late, we have not found this to be the case. In fact our book sales have been steadily increasing over the last few years.

But what has changed is that as each year -- indeed even as each month -- passes a greater and greater percentage of these sales, as well as of DVD and other sales, occur online to the point where it seems impossible to justify the constantly increasing overhead costs associated with the physical store.

This is a trend that is happening across North America and not by any means to us alone.

The neighbourhood bookstore or used bookstore -- in all its many glorious variations -- is it seems becoming a forgotten thing. A generation will grow up without them playing the role they did in my youth. Many of them will miss out on browsing through the stacks, engaging workers and owners, moving one book to find a hidden treasure behind it and simply soaking in the wonder of having so many different thoughts, different minds, different styles -- different worlds even -- all around them in what is, after all, just a shop! 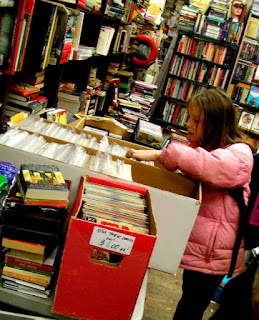 When Natalie and I made the decision that it was time to bring this journey to an end and to move the bookstore onto the internet it was not an easy one.

In fact it was, despite the reality of it being the right decision, a very hard one.

Looking back, so much changed over those years. That tiny little boy at our feet is now a young man who entered high school this September. Governments, wars, trends and lives have come and gone. And so many local bookstores, especially used bookstores, have slipped into that cultural memory chest alongside things like the record store and the typewriter.

Even as this holds the promise of new beginnings and the excitement of new starts, it also means that most awful of all things, the goodbye and the farewell.

Yet, whether said by Dr. Seuss or Gabriel Garcia Marquez "Don’t cry because it’s over. Smile because it happened."

The store happened. We were there. And it was a terrific story. 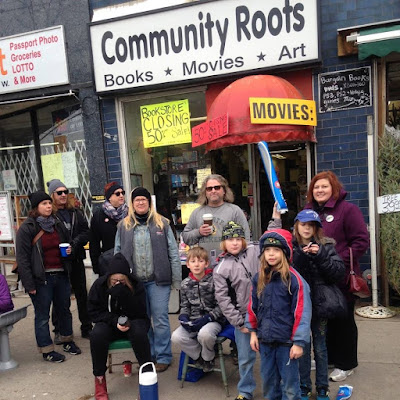