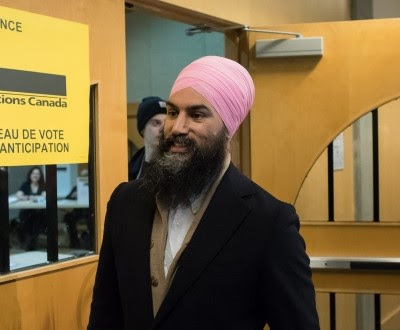 Apparently the masses didn't get the memo.

Despite all the assurances and social media posts of NDP partisans, and despite the surprising number of left activists who decided to jump onto a bandwagon to nowhere, Jagmeet Singh and the NDP not only did not surge they ended up with their worst result in 15 years wiping away all the gains of the Layton years that were supposed to deliver them to the Promised Land of power.

Even though is was pretty clear to any objective observer that the Singh Surge was more media invention than reality, everyone on the left was to buy in. As always.

Whatever spike there was faded away as it is easy for such electoral ephemeral shifts to do given they are based on short-term campaign factors as opposed to having been built towards over time.

The NDP has lost close to 1,700,000 votes since 2011, lost nearly 600,000 from 2015 and sits now around where it did in the early 2000s. In the wake of generationally disillusioning provincial governments the NDP has lost the gains it had made in Nova Scotia and did terribly in Saskatchewan and Manitoba. It lost 2 seats in British Columbia where it is in government. The huge inroads into Quebec have been driven back to one seat and in Ontario the party still cannot win a seat in Toronto which is pretty staggering for a party on the left.

Surely, at some point in the coming days, the partisans and NDP left hangers-on have to stop lying to themselves that this remains a moral victory or a sign of better things to come because "it could have been worse" and now "we hold the balance of power".

The Liberals actually ended up close enough to a majority that they will not have to depend on the NDP necessarily at all on many issues. The Communist paper People's Voice put it very well in an editorial this morning:


The reality is that the Liberals may be able to avoid much of the pressure typically forced upon a minority government. They won a much larger seat count than most polls projected, and only need to secure around 15 more votes to pass legislation. This means they do not need to rely consistently on parties of the centre-left, but can shop around, picking and choosing their allies depending on the issue at hand. While Trudeau will likely work with the NDP, Bloc Québecois and Greens on certain social reforms, the Liberals may very well pursue common cause with the Conservatives on key issues like pipelines and militarism.

Leftists in Canada cannot afford to continue to hitch their fortunes to a party whose vision of "movement" building consists of giving its left flank a wink and a nod every four years knowing they will come out as they feel they have nowhere else to go. A party whose centralized, paranoid leadership clique consistently scuttles party democracy to ensure the NDP remains an ultimately deadening, parliamentary focused albatross around the neck of socialists. A party who shifted far to the right under Layton even before "winning" opposition, then shifted further that way once it had in 2011 and saw itself as on course to replace the Liberals, and then shifted right so far yet again in the 2015 election under Mulcair that this allowed Trudeau to portray himself as more progressive.

The fact that the party allegedly turned back to the "left" on a handful of issues and rhetorically this time around was not some huge victory for the party's left, such as it is, or for outside movements, but rather it had literally nowhere else to go. In the era of Bernie Sanders, the rise of the Greens and with a Liberal Prime Minister quite effective at soaring, empty progressive rhetoric the NDP's sole choice for survival was to adopt Green New Deal and Make the Rich Pay talking points during the election that they had done nothing to build momentum towards prior to it.

The absurd and self-destructive insistence and "tactic" of many leftists that somehow we all have to rally behind the NDP every election, lend it "critical support" and yet go on to claim that the party's platform, candidates, etc. are all way more left wing than they really are, has to be fundamentally rethought. So too does the idea that social movements are impacting the party in any meaningful way other than the way that all bourgeois, mainstream political parties respond to social trends. Justin Trudeau, after all, talked throughout the election about standing up to the 1%. It was in Liberal TV commercials.

In the weeks and months ahead we have to hope that pressure from the people and in the streets does force the Liberals to shift policy wise in a way that makes them turn more to the NDP and Greens than to the Conservatives.

And the socialist left in Canada needs to start the hard and long work to the build the mass leftist political movement outside of the NDP that the country and its working people so desperately need.
Posted by Michael Laxer at 7:10 AM