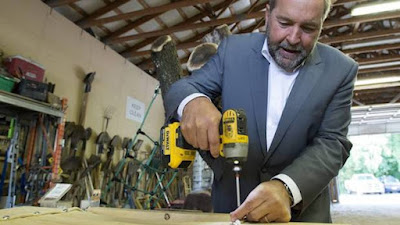 Committing to balanced budgets as the economy slows and recession looms, bragging about a lower corporate tax rate than the G7 average and the U.S., small business tax cuts, increased military and police spending and other social spending commitments buried or not even mentioned at all – sound like a Stephen Harper spending plan?

Well, it very well could be but it was actually Thomas Mulcair and the NDP’s spending plan released earlier this week. Ever since the NDP leader committed that his government would absolutely balance budgets regardless of the state of the economy if elected, he has been on the hot seat to explain how he would do this without raising taxes or cutting social spending commitments. Mulcair immediately moved to dampen expectations in terms of social spending by saying that an NDP government would only pledge to meet its biggest commitment, a $15 per day national childcare plan, by the end of its first term. This was later pushed even further back to perhaps a second term.

Remind you of anyone? This is the old Liberal government trick of pushing social spending commitments further and further back as you continue to cut taxes and spending. Eventually the government is defeated, as happened to the Paul Martin Liberals in 2006, and numerous social spending commitments remain on the table and never fulfilled. Including, as was the case with the last Liberal government, a long promised national childcare plan that was never met.

So, the NDP released its long awaited campaign spending plan on Wednesday and fear not, there are no substantial tax increases. As the party has promised throughout the election, there are no income tax hikes, not even on the very wealthy. There is a meaningless two per cent corporate tax increase which the party document lauds still puts Canada below the G7 average and U.S. rates – as if this is something to brag about.

If the NDP refuses to raise tax levels in any significant way, where are they going to find the money to meet their spending commitments? By closing stock option loopholes for rich CEOs, of course. The NDP document doesn’t say exactly how they plan to do this but the measure is supposed to generate $2 billion over four years – not very much either way. However, seeing as the wealthy employ high priced lawyers to help them take advantage of such stock option loopholes, it seems unlikely an NDP government would be able to crack down on the practice quite so easily.

The NDP plan also says it will generate $580 million over four years by reallocating unspent P3 funds to infrastructure spending. Again, not very much money but how easy would it be for an NDP to reallocate these unspent funds without paying stiff penalties, considering the current Conservative government may very well likely have reached preliminary agreements with private companies on how this money is to be spent?

The document also says $1 billion over four years would be saved by canceling fossil fuel subsidies. However, as a Globe and Mail article points out, finance department documents show no such gains would be made. The same article also points out that it appears somewhat dubious the $5.4 billion the NDP has put aside for health care will not only meet the party’s commitment to increase funding to the provinces by six per cent a year but also cover all of its other health care commitments made during the campaign.

The NDP will put $6.6 billion over four years toward its much-vaunted $15 per day national childcare plan. However, will this really be enough, even to get this program off the ground? Considering in order to make the program work a federal NDP government would likely have to take on more than 50 per cent of the costs in the poorer Maritime provinces.

And, of course, young people are not left out of the NDP’s spending plan. The party will slate $1.4 billion over a term to an area called “Opportunities for Young Canadians.” This money is supposed to go toward helping young people get jobs and help with the cost of post-secondary education. However, the document does not mention, and there is certainly no intention, of either freezing or lowering the skyrocketing cost of post secondary education – the number one obstacle that is currently limiting the economic success of Canada’s young people.

Several other promised spending measures are noticeably absent from the document. Such as the NDP’s promise to reinstate door-to-door Canada Post home delivery, instituting a carbon tax or any other environmental measures. At the NDP’s press conference to announce its spending plan, the party did admit it would have to eliminate its pledge to increase foreign aid by 0.7 per cent of GDP.

However, one commitment that is certainly not left out is the NDP’s pledge to increase spending on military and policing. In the first year of its mandate, an NDP government would spend $185 million to make Canada more “safe and secure” and this would increase to $398 million in the fourth year for a total of $1.4 billion.

Another spending promise that the NDP is holding true to is the party’s pledge to cut the small business tax from 11 to nine per cent at a cost of about $3 billion. As NDP Leader Thomas Mulcair has reminded us over and over again during this campaign, small businesses are the heart of our economy and the true “job creators.” So the NDP says the long-term benefits of the small business tax cut in terms of jobs and economic stimulus will far outweigh the initial cost.

Unfortunately, Mulcair and company will find few serious economists that agree with them on this point. For example, while tax expert Jack Mintz fully supports cutting the corporate tax rate as a means of stimulating the economy, he cautions against small business tax cuts. In a paper, he writes that roughly 60 per cent of the value of a small-business tax deduction accrues to households earning more than $200,000 per year.

The Globe and Mail calls the numbers used in the NDP spending document “fuzzy at best” and this is being very, very kind.

Quite frankly, this document isn’t worth the paper its printed on.


See also: It appears the NDP strategists are stuck in the 90’s – again

Posted by Michael Laxer at 8:47 PM