This is the fifth installment of our weekly election round-up of the inane, bizarre, humorous and unusually facile in the great show that is mainstream bourgeois politics in the EPIC election of 2015.

1) We would really like to have more women candidates...but we don't. 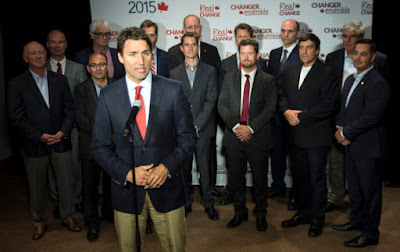 Feeling nostalgic for the way politics used to be in Canada? Well, apparently all you need to do is show up for a Liberal photo op in Quebec City! There, due to "an accident of geography" you can get a feel for what a Liberal candidate team might have looked like under the leadership of Wilfrid Laurier.

2) How dare you get invited on stage with your subversive T-shirt! 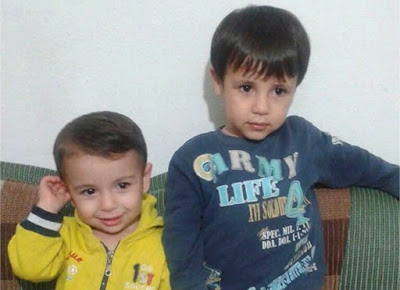 So...anti-Harper activist Sean Devlin shows up for a Harper rally. Breaking no laws and doing absolutely nothing illegal, he is allowed into the event and then invited up on to stage to stand behind Harper as some event organizer thought there needed to be more young folks to offset Harper's grey hair or something.

At this point some of the dim bulbs in Harper's security detail notice he is wearing a T-shirt reading "Aylan should be here" calling out the Conservative government's disgraceful inaction in the face of the Syrian refugee crisis.

Despite, you know, having been INVITED up on stage Devlin is then forcibly and violently removed from the stage, the T-shirt is ripped, he is thrown in jail for a few hours and then  released after being told he could still face a variety of ludicrous charges anytime in the next six months.

I rather suspect these charges will never be laid, because even in what increasingly feels like a police state, this is a sick farce. 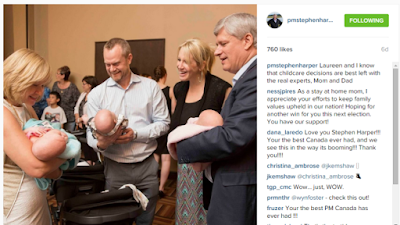 It would seem that a surprising number of Instagram users were horrified to have their regular stream of cat photos, selfies and pictures of what their friends ate at a restaurant last night broken up by the Dark Lord coddling babies!

When they voiced their displeasure, the Dark Lord's minions, of course, deleted everything they said...and put all of their user names on CSIS and RCMP watch lists.

4) "Ok...yes...after promising a lot of progressive stuff during the 1993 election, just like I am now, he went on to do the total opposite...but that was different" 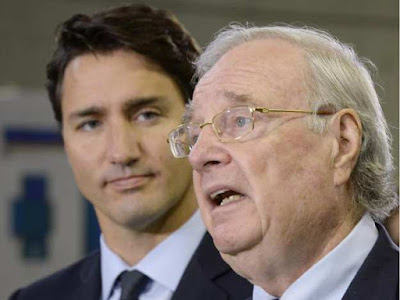 So what do you do when you are reminded that the fella you had out on the trail helping to promote your new anti-austerity crusade was the same guy who as Finance Minister in the 90's, after coming to power on a strikingly similar progressive platform, repudiated it entirely and launched a harsh austerity program that included huge cuts to transfer payments?

Easy. You simply say "that was then...this is now". Right?

5) I am the Prime Minister...what the hell do I know about handling the cash?

This one rather speaks for itself!

Bonus: Despite it all...the people are just not buying the bullshit! 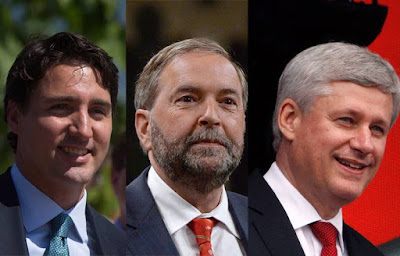 "The poll conducted on behalf of Global News found 40 per cent of Canadian voters agree that the Liberals, Conservatives, and NDP “are basically the same” despite the leaders’ best efforts at every campaign stop to differentiate themselves from their opponents.

The difficulty is most apparent when voters compare the Liberals and NDP, according to the Ipsos poll. Forty-two per cent of Canadian voters say it’s hard to tell the difference between policies introduced by the two left-leaning parties."

"One of the most important aspects of the political life of advanced capitalism is precisely that the disagreements between those political leaders who have generally been able to gain high office have very seldom been of the fundamental kind these leaders and other people so often suggest." -- Ralph Miliband

Thus ends our fifth look at the Grand Farce. See you next week!

See also: We have a platform? No way!...and other follies from week four of the 2015 election -- A Left Chapter round-up

See also: Lying pieces of shit and other follies from week three of the 2015 election -- A Left Chapter round-up