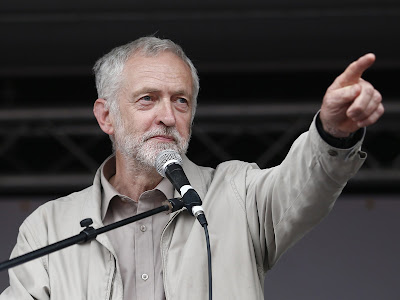 As NDP strategists mull over the polls this weekend and try to figure out why their shift to the right of the Liberals on the issue of balanced budgets and deficit financing doesn’t seem to be playing out as they hoped in Ontario, they might be wise to take some time out and do a little research on the British Labour Party leadership election.

Early projections seem to indicate rogue left wing MP Jeremy Corbyn is poised to win the party’s leadership race on Sept. 12. Corbyn is not only left wing, if he wins the Labour leadership, he would be the party’s most left leader in more than three decades dating back to the early 1980’s when Labour was led by Michael Foot.

The longtime Labour politician has also remained unshakeable in his convictions of what he believes constitutes a truly social democratic society. Or, to put it more succinctly, Corbyn has never advocated tax cuts for the middle class as one way of achieving social democratic goals.

The Blairites are of course horrified but it doesn’t really matter what they think if the majority of the Labour Party membership is behind Corbyn which they appear to be. The British press is already speculating the MP from Islington -- who chooses to wear a suit and tie as little as possible and likes to speak his mind about his left convictions -- could pose a real problem for David Cameron and the Conservatives and actually become Prime Minister in the near future. Some journalists are accusing the Blairites of being stuck in the past and failing to see the on the ground appeal of a guy like Jeremy Corbyn to a significant constituency of voters.

Let’s shift over to the Canadian political scene for a moment.

Although the people running the Federal NDP and its provincial wings these days will never admit it publicly, they are strongly influenced by Third Way politics and the vision that Tony Blair very firmly stamped on the British Labour Party in the early 1990’s. Third Way politics basically says there is no way social democratic parties can get elected anymore on the types of platforms they ran on from the post World War Two period up until the early 1980’s. They believe all voters, including working class voters, have moved on from any opposition to capitalism, favour neoliberal ideology without question, do not believe an interventionist state in the economy can ever have a positive influence, are anti-labour and much more individualistic than they had been in the past.

So wherein lies the hope for social democratic parties as far as how the Third Way sees it? There is a "third way" that can be instituted which means social democratic parties have to far lower their expectations of the past by fully embracing the inequities of the free market, eliminating government intervention in the economy from the policy book, sometimes reducing income taxes and certainly never raising them, being firmly committed to balancing the budget, trying to appear as business friendly as possible and never, ever doing anything pro-labour.

If social democratic parties are willing to accept the cold and harsh realities that the general public has moved significantly to the right, they can then make themselves palatable to voters and actually win elections. What is their advantage over the right wing parties? They are a kinder, gentler form of neoliberal party than the mean spirited right. They seek not to destroy the state but to try to preserve it in the current harsh realities that we live in. Their goal is not to completely eliminate taxes but maybe just keep them where they are or reduce them slightly. These parties are also much more easily able to present themselves as more open minded and liberal parties on social issues than the right wing parties who are really neoconservative parties and believe in a much less socially liberal society.

The Third Way is the strategy New Labour ran and was elected in Britain on in the 1997, 2001 and 2005 elections. It was the platform that was used in Saskatchewan that saw four straight NDP governments elected from 1991 to 2003. It is also the strategy that has been used by the Manitoba NDP that is now in its fourth consecutive term after winning power in 1999. A lot of NDP strategists would probably argue that the short-lived Bob Rae NDP government in Ontario in the early 1990’s might have lasted longer had it been willing to accept Third Way strategies a little more fully or at least a lot sooner.

However, all of a sudden the Third Way strategy doesn’t seem to be working as well as it once did. New Labour lost the 2010 British election and was soundly defeated in this spring’s election by the Conservatives. Many of its losses came at the expense of a much more left Scottish Nationalist Party.

In Saskatchewan, the NDP was soundly defeated by the right wing Saskatchewan Party in the 2007 election and then thoroughly routed by them again in the 2011 election – suffering the party’s worst electoral loss since its very early CCF days. The once formidable Saskatchewan NDP now sits rudderless and directionless in opposition with only a rump of nine seats. The party is not positioned to win the next election and it could be a number of years before they are competitive again. To give the Saskatchewan Party credit, they were forward thinking enough to shift slightly left after their surprising 2003 election loss – eliminating any public fears that they would privatize Crown corporations, generally maintaining existing government services and shedding the image of being nothing more than a neoconservative party trying to move the province to the hard right.

The B.C. NDP was supposed to be a shoe-in for government in the 2013 election as a discredited Liberal government appeared to be on its way out. However, the party ran on a moderate centre-right platform and was soundly defeated. The Manitoba NDP is likely headed for defeat in the next provincial election. The Nova Scotia NDP was elected for the first time on a centre-left platform in 2009 but only lasted one term being defeated by Liberals in the 2013 election.

And perhaps the biggest screw up of them all – the Ontario NDP’s bizarre decision to trigger an election in the spring of 2014 and then run on a right wing populist platform. Right of, you guessed it, the Liberals this time around.

Every thing they did in the campaign seemed designed out of some sort of Mike Harris/Rob Ford handbook. The NDP railed out against government excess and tried to position itself as the party of small business. It lashed out at the Toronto “elites,” which was pretty much anyone who questioned their ethics or motives, and wondered why many unions in the province decided not to support them after the NDP was running a campaign that was in many ways hostile to labour. They accused the Liberals of running a fiscally irresponsible campaign when in reality the Liberal campaign was hardly fiscally ambitious at all. The party even decided to place a cover ad in the Toronto Sun of all newspapers – you know – to reach out to all their blue-collar right wing friends who read it.

And it all made such “common sense.” Except to voters of course who decided to re-elect the Liberals to a majority on election day and reward the NDP with a third place finish.

Now the Federal NDP strategists will tell you the party ran on a centre-right platform in the 2011 election winning more seats than it ever has and becoming the official opposition for the first time in the party’s history. However, if they were actually honest -- and in their current state of hubris they most likely wouldn’t be -- they would admit that the party’s good fortunes had much more to do with the strange circumstances of that particular election than anything that was in the NDP platform.

First, the Liberals hit what will be for them likely rock bottom running under a leader which is the worst the party has ever seen in its modern history in Michael Ignatieff. Ignatieff wasn’t even able to hold his own Toronto seat.

Second, after almost 20 years of successful campaigns in Quebec, the Bloc Quebecois completely imploded and bit the dust leaving a tremendous opportunity for another party to become dominant in the province. With the Liberals remaining largely discredited in Quebec since the sponsorship scandal and the Conservatives quickly wearing out their welcome after the 2006 election, the NDP was able to seize that opportunity and fill the gap.

Third, and most important, the NDP was very well served by their late leader Jack Layton who admirably decided to fight the campaign despite suffering the effects of a recent hip replacement and what later came to be known was terminal cancer. In his fourth campaign as party leader, Layton caught on like wildfire across the country but no more so than in Quebec where his meteoric increase in popularity there sealed the deal for the NDP in the province.

The point of all this is the NDP might actually want to try something that would be considered a little “radical” to those people running the party these days. Rather than always shifting right why not shift a little left? Maybe consider that working people might actually be a little bit fed up after 25 years of neoliberal policies and lies that have left them worse off than at any time since before the Second World War. That people may not be so easily tricked into the deficit hysteria as they were 20 years ago. That they even may be willing to pay a bit more in income taxes if this means better public services.

In general, why not just try and run on the values your party was founded on rather than someone else’s? You certainly would make your base happy and give your party members and campaign workers something to believe in again and you might just gain some votes and a little respect at the same time.

It also likely wouldn’t splatter as much egg on your face as promising to balance the budget heading into a looming recession.

See also: The follies of the NDP running a right wing populist campaign

Send them to The Left Chapter via theleftchapter@outlook.com!
Posted by Michael Laxer at 1:34 PM