The NDP's phony “credit card” analogy: a neoliberal conception of the public household 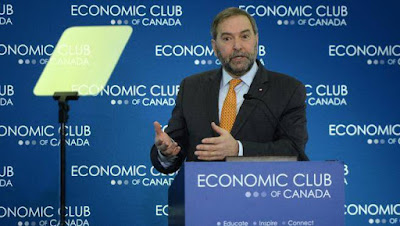 In an ironic twist, while the Liberals are positioning themselves as the party of Keynesian interventionism, Mulcair and Thomson have effectively expunged any remaining Keynesian notions from the party.  Commenting on the press conference where Thomson’s candidacy was unveiled, respected TVO journalist Steve Paikin expressed surprise at the NDP’s attempt to present themselves as the biggest deficit hawks of the major parties.  As Paikin reports:

“Mulcair reiterated his pledge to balance the budget during his first year in office. During a wide-ranging, free-wheeling scrum, I asked Mulcair why he thought it was so imperative to be even a tougher deficit hawk than the prime minister. He said it was immoral to go further into debt today, and pass on the responsibility of repaying those debts to our children and grandchildren. Thomson added that while Canada’s debt- to-GDP ratio is a manageable 30 per cent, if you add all provincial debts into the mix, it gets closer to 85 per cent which he considered dangerous.
“Do you like Paul Krugman as an economist?” I asked Thomson.
“I do,” he said. Krugman has repeatedly written in his New York Times column that with interest rates at historic lows, it’s a perfect time to deficit spend to catch up for decades of under investment in infrastructure.
“But on this one, Krugman’s wrong,” Thomson said.”

It is ironic to see the NDP present themselves as the most committed deficit fighters.  During the 2008-09 fiscal crisis, Jack Layton led the charge for a greater stimulus, in opposition to the Hooverian orthodoxy of the Harper government.  And as recently as last year, Finance Critic Peggy Nash stated that the government’s focus on deficit reduction was wrong-headed in a time of high unemployment and the economy operating below potential.

Nor are the two NDP provincial governments prioritizing fighting the deficit.  The government of Greg Selinger in Manitoba has run deficits since 2009.  And while the government of Rachel Notley in Alberta inherited a deficit from the previous Conservative government, it has vowed not to cut services in order to balance the books.

In criticizing Trudeau’s short-term deficit spending plan, Mulcair and Thomson have continued to present right-wing talking points.  A particularly ludicrous example is this recent statement, which says:  “Justin Trudeau has already maxed out his deficit credit card in the first year of his “fiscal plan.””

These right-wing talking points are balanced out by ones about “deep Martin style cuts.”  Yet the NDP, if it accepts the self-imposed constraints of balancing the budget no matter what the circumstances (while keeping taxes at “competitive” levels) will almost inevitably be forced to make cuts (and the experience of the Ford regime in Toronto has shown that the idea of only pursuing “painless” cuts, going only after waste without touching essential services, is a mirage).  And they certainly render a social democratic reform program virtually impossible.

This phony “credit card” analogy shows the degree to which even social democratic and center-left parties have embraced the neoliberal conception of the public household.  It appeals to the populist “common sense” idea of “if a family must live within its means, so should the government.”  But this is a ludicrous idea as the government is not a private household!

The distinguished political economist Andrew Gamble has argued that neoliberals have too long dominated the discourse about the public household.  According to Gamble, the center-left must

...find new ways to talk about the economic crisis and to engage in the politics of austerity.  At present it is losing the argument.  One of the reasons for this is that politicians of the centre-right have generally been more adept at employing a discourse about an international market system that must obey the impersonal rules of ‘market forces’ alongside a discourse about the public household.  In this discourse the public household is often reduced by analogy to a private household (which must subordinate everything to balancing its income with its expenditure) or to a corporate household (which subordinates everything to the bottom line and the pursuit of efficiency.


In recent years even the center-left has often accepted the “minimalist” conception of the public household, and should again be “maximalist.”  As Gamble states: “Recapturing the confidence to affirm the importance of politics that shape the way markets are governed and companies are governed is an essential step to a new centre-left political economy.”

The NDP’s embrace of conservative talking points about deficits and use of a “credit card” analogy to talk about government spending shows that they have a long way to go!

Matt Fodor is a Toronto based writer and academic. He is a Ph.D. candidate in political science at York University.

This piece originally appeared on Matt Fodor's new political blog, Dropping the Writ. It is reprinted here with permission.

See also: As "Third Way" politics suffers a huge defeat in the UK, in Canada it has now triumphed

Send them to The Left Chapter via theleftchapter@outlook.com

Posted by Michael Laxer at 1:12 PM