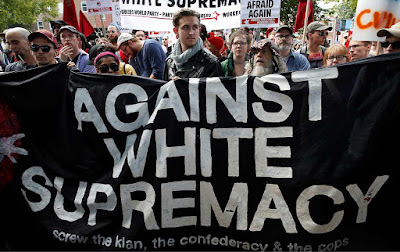 This list covers the week of  August 13-20. It is generally in order of the date of the article's release.

Damore became an ‘alt-right’ hero after Google fired him over his views on women. Did Google-owned YouTube play a role in reinforcing those ideas?

As of today, the mother of the murder suspect who killed at least one person in Charlottesville Virginia during a white supremacist rally, told reporters that all she knew the last time she talked to her son, is that he was going to an “Alt-Right” rally. She had no idea her son was a racist — or did she?

3) “SEX WORK IS WORK” – THE NEW ZEALAND MODEL OF MISOGYNY

James Robb, A Communist at Large

It is easy to underestimate the current  ideological and political drive against women, and the degree to which it threatens the gains made in the struggle for women’s equality from the 1970s onward.

For more than four years, The Daily Stormer has used the internet to dish up a daily menu of hate-fueled, neo-Nazi, white supremacist red meat to its readers. On Sunday, a handful of the companies involved in making that possible decided that enough was enough.

Seahawks DE Michael Bennett became the latest NFL player to sit for the national anthem, ahead of Sunday’s preseason game against the Chargers. He referenced the still-unsigned Colin Kaepernick (of whom Bennett has said, “of course he’s being blackballed”), but Bennett said this weekend’s white supremacy rally in Charlottesville and accompanying violence is what spurred him to act.

6) Black people have had a presence in our history for centuries. Get over it

Africans have lived in Britain since the Roman empire. When a leading historian confirmed this, she was vilified.

I imagine that many of ARC's readers have been following the White Supremacist rally in Charlottesville, VA as well as the large counter protest opposing them. The anti-fascists, anti-racists, and faith groups, and others faced off against bigots who, in many cases, were armed. There were a number of people injured and at least one counter protester was killed when a car driven by an "alt-right" supporter and plowed into a large group.

8) Foreign Farmworkers in Canada Fear Deportation if They Complain

Desperate to provide for his family, Hilario Mendoza leapt at the chance to leave Mexico to pick cherries on a farm in British Columbia.

9) ‘Why is this man in prison?’, judge asks government lawyer in immigration detention case

Refugee claimant with no criminal record has been locked up in maximum-security jail since October.

“RACISM IS EVIL,” declared Donald Trump on Monday, “and those who cause violence in its name are criminals and thugs, including the KKK, neo-Nazis, white supremacists, and other hate groups that are repugnant to everything we hold dear as Americans.”

One of the most chilling moments in Vice News’ new mini-documentary on the #UniteTheRight rally this past weekend comes at the end, when reporter Elle Reeve sits down with a well-armed white supremacist named Christopher Cantwell, who tells her, among other horrific things, that he thinks the ISIS-style car attack on counterprotesters that left activist Heather Heyer dead was “more than justified.”

The likes of Levant and other “white passing” Jewish people of the far right, are finally realizing white supremacy casts upon them the same contemptuous gaze as it does on Black and brown people.

13) Bonfire of The Rebel

It’s easy to forget that the firestorm engulfing America over Charlottesville began when a democratically elected local council, after full public debate, voted to remove a Confederate monument.

Hate crawled up from the sewers of Charlottesville, Virginia on Friday and flooded the streets with thousands of white men baring torches and chanting unbelievable hatred.

15) Neo-Nazi who talked coldly of the murder of antifa “animals” turns tearful at prospect of arrest.

Call it a tale of two videos. On Monday, Vice News released a mini-documentary on “Race and Terror” in Charlottesville chronicling the #UniteTheRight march of this past weekend and the murder of antifascist activist Heather Heyer.

The white supremacists, nationalists and far-right trolls who starred in last weekend’s violent Charlottesville rallies have suffered no lack of humiliation in the days since.

Polish police broke up a feminist rally and forcefully removed activists to clear the way for a march for far-right extremists.

18) Centrists attack the left, but they are the true ideologues

If a new so-called centrist party is to be set up, why not call it Denial, or perhaps Hubris? Self-described centrists believe that they are the besieged remnants of political sanity in a world gone mad. To be a centrist, so this story goes, is to be above ideology: pragmatic, focused on “what works”, being grown up. They are the moderate stabilisers, or according to this narrative it is their marginalisation that has opened the way to the extremes. In this centrist worldview, the xenophobic, racist or indeed fascist right are deemed to be politically and morally equivalent to the radical left.

There’s a funny bit of insider knowledge hidden in the Chinese takeout menu above. Take a minute to find it. If you haven’t figured it out yet, here it is:

Christopher Cantwell has a knack for getting himself noticed. The 36-year-old white supremacist with an internet radio show and a long history of violent rhetoric was one of the most visible figures at this past weekend’s #UniteTheRight rallies in Charlottesville.

21) How Trump Ruined My Relationship With My White Mother

Like most of America, I’ve had a week. Whereas Charlottesville, Va., touched off a week of necessary discussions, debates and arguments centering largely on our president’s ignorance and emboldening of the very real problems in America, I’ve had exhausting, draining and, ultimately, disappointing arguments about America’s race problem within my own house with my mother.

The mother of Heather Heyer, the woman killed while protesting Saturday’s white-supremacist rally in Charlottesville, Va., said she won’t talk to U.S. President Donald Trump “after what he said about my child.”

A Twitter post from the account of Jason Kessler, the far-right activist who organized the Charlottesville, Va., “Unite the Right” rally, insulted the protester who was killed at the event, saying late Friday night that her death was “payback time.”

A controversial Free Speech Rally in Boston fell apart Saturday afternoon when thousands of counter-protesters showed up and drowned it out. Journalists at the Boston Common, a downtown park, tweeted about an hour into the planned rally that many, if not all, of the attendees left the bandstand where they were due to hear speeches from several prominent conservative figures.

Messages of love, tolerance and understanding were shared by thousands of people who gathered on Saturday to protest racism and hate.

26) Will ‘BlackOut’ Be the Movement to Shut Down the NFL?

This should be an interesting football season, and year, for that matter, as many American institutions are messily having their come-to-Jesus moments.