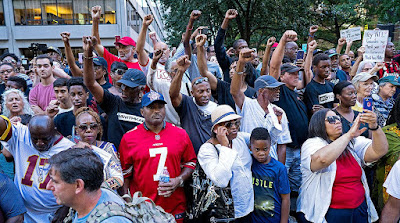 
This list covers the week of  August 20 - 27. It is generally in order of the date of the article's release.

Kim Wall has reported on stories around the world. But she was to disappear in a country known for gender parity: Denmark.

Kneeling and bowing their heads, the Cleveland Browns bonded over something bigger than football.

3) The Confederate General Who Was Erased

There’s a reason you won’t find many monuments in the South to one of Robert E. Lee’s most able deputies.

World-renowned chef and occasional reality TV star Susur Lee is under fire this week for allegedly forcing staff at three of his restaurants to pay for common serving mistakes, like spilling drinks and order errors, with their tip money.

Spilling a drink, sending the wrong drink to a table or punching in an incorrect order with the kitchen were all examples of mistakes that cost employees tip money, according to staff at chef Susur Lee's restaurants — a practice that is forbidden under Ontario's Employment Standards Act.

The problem is this; Lee Restaurants using the IOU system in their restaurants. The system was put into place to make sure FOH and BOH staff paid for any mistakes, accidents, walkouts, kitchen errors or sendbacks out of their own tips. This is 100% illegal under Ontario Law. When questioned, a representative commented that the money confiscated by the company was used to fund staff parties and pay for aprons.

Unlike Indigenous water protectors at Standing Rock, the Unite the Right rampagers were not blasted with freezing water canons, or shot in the head with rubber bullets.

8) McDonald's workers to coordinate strike with allies around world

Workers at two McDonald’s restaurants in the UK will go on strike on 4 September, the US Labor Day holiday, in an attempt to coordinate action against the fast food giant with allies around the world.

9) Why Trump Can't Quit the Alt-Right

Well, it's over now – right? He may have three and a half years left in office, but Donald Trump is finished. The Charlottesville tragedy was the final stake through the Grinch-heart of his presidency. If he didn't deserve it so enormously much, it would be sad.

10) Why are we so desperate to blame white supremacy on women?

Some people can't look at a neo-Nazi without condemning the woman who washes his socks for him.

The US state of Missouri has halted the execution of a man who was scheduled to be put to death on Tuesday for the 1998 murder of a woman after new DNA evidence surfaced supporting his claim to innocence.

The municipality of Pointe-des-Cascades, Que., says it won't remove an anchor adorned with a swastika in a neighbourhood park because the piece has historical significance.

The sister of Barbara Kentner — the Anishinaabe woman who died after she was attacked with a trailer hitch — has moved away from Thunder Bay following threats targeting her children.

14) Legalise prostitution? We are being asked to accept industrialised sexual exploitation

Right now, a global push is under way for governments to not only tolerate but actively enable the sex trade. The call is clear: decriminalise brothel keepers, pimps and other “third parties”, allowing them to profiteer freely – and certainly don’t dampen demand for the trade. This is no mundane policy prescription. The stakes are immense.

15) Lessons on how to confront fascists

I’ve been away in Britain for two weeks and have observed the reaction to white supremacists and their Antifa opponents through the banal absurdities of the U.S. president, the Canadian media, and the European body politic.

16) Hank Aaron speaks out on Colin Kaepernick controversy: 'He's getting a raw deal'

Hank Aaron has weighed in on the controversy surrounding Colin Kaepernick, saying the quarterback is "getting a raw deal" from NFL owners.

As U.S. legislators mull the removal of statues seen by many as painful reminders of the darker moments in American history, a similar debate is playing out in Ontario over whether public schools should bear the names of Canadian figures associated with this country's legacy around the treatment of Indigenous communities.

18) Sexual harassment and the sharing economy: the dark side of working for strangers

Women working for companies like Uber and DoorDash say they have been groped, threatened and harassed by customers. Their stories highlight how technology connects strangers – and opens the door for abuse.

Wow, guys who call themselves feminists sure don’t have to meet too many expectations.

Did you know that women and children fleeing domestic violence in Ontario can’t always get the help they need? And yet in North York, the only shelter serving women and children closed its doors on May 19, laying off 32 shelter workers.

The grape harvest happening now in vineyards throughout the Israeli-occupied West Bank has begun to yield the fruit that will eventually become wine labelled "Product of Israel."

On a recent early-morning outing, Israeli boys with clippers cut bunches of green grapes that the Shiloh Winery will use to produce a chardonnay that will be sold around the globe.

But half a world away in Winnipeg, a child of Holocaust survivors is fighting to change the labels on bottles of wine produced in Jewish settlements in the West Bank.

The larger wrong in Colin Kaepernick situation is beginning to overtake any original insult or disrespect the quarterback may have committed.

24) Yup, the Toronto Sun is Boosting the Fraser Institute's Bogus Tax Calculations On Its Front Page

Can the federal NDP maintain a hard-won presence in Quebec and at the same time become more competitive in the rest of Canada? Or is its repository of Quebec votes little more than a poisoned chalice?

On the eve of the only French debate of the NDP leadership race, contender Jagmeet Singh criticized two of his opponents for their statements on a contentious Quebec law that would ban face coverings, such as the niqab worn by Muslim women, for people who are giving or receiving public services.

Around 6 p.m. ET on Wednesday, at the corner of 51st Street and Park Avenue in midtown Manhattan, Reverend Stephen Green stood at a podium on a raised stage, in front of a microphone, with about a dozen other social activists behind him. In front of him stood several hundred rally attendees, standing seven or eight deep, all the way down the city block.