Mulcair doubles-down on the NDP's right shift by defending Thatcherism 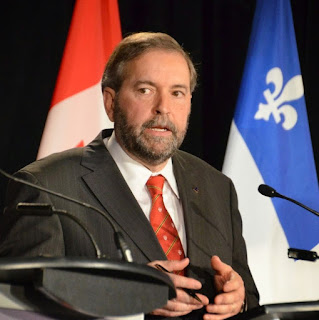 This week is the week where I think it can officially be said that the NDP leadership "jumped the shark" from any pretense at ties with its roots as a social democratic labour party to a straight-up and very open embrace of Blairite centrism and neo-liberal "progressiveism".

First came the party's totally reactionary and completely unnecessary pandering to the law-and-order crowd with its promise of $250 million in new spending for new police officers -- just what the country does not need.

Especially given the inane previous pledges by Mulcair to balance the books as a priority and not to increase personal taxes at all on anyone this pretty directly means diverting $250 million from areas of government spending like education or healthcare to rewarding the strong-arm of law enforcement despite the fact that crime rates continue to decline almost every year in Canada.

The pledge did get some very enthusiastic support however -- from cops! 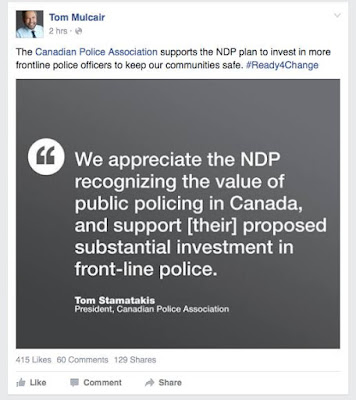 This, I suppose could simply be written off as continuing a highly dubious legacy started by Jack Layton,  had it not been followed by Tom Mulcair actually doubling-down on comments he had made in 2001 praising Margaret Thatcher.

In 2001 then Quebec Liberal Mulcair said:

A government should never pretend it can replace the private market. It does not work It didn't work in England. Up until Thatcher's time, that's what they tried, the government stuck its nose everywhere.

As the Huffington Post further noted he said this in the context of complaining that his Parti Quebecois opponents had intervened in the market too much and that Quebec's taxes were too high.

He further said that:


...interventionism is a failure. A government can create the conditions conducive to the creation of jobs… but the best way for a government to create wealth is to let the private market thrive and to get off the back of business men and women.

This, I can safely state, is not a conventionally social democratic viewpoint! In fact, of course, it could easily have been said -- and has been -- by any number of right wing politicians from the Conservatives or Republicans.

So, in 2015 did Mulcair choose to say that his views had changed or evolved?

Instead he "defended his comments as an example of good public administration"!

He went on to say:

There are certain things that work and others that don't, and it's not surprising that I'm in favour of the things that work...
My No. 1 priority is to get good services to the public. That hasn't changed and that's what that statement was about — making sure that the public gets the best services possible.

But there is an obvious and clear problem with this -- it embraces the extreme and brutal neo-liberal model of Thatcherism, which was totally centered around the gutting and elimination of public services, as the way to make "sure that the public gets the best services possible".

Even by recent standards of NDP and progressive double-think this is a ludicrous, self-contradictory and indefensibly reactionary assertion to make.

This has now become theater of the political absurd. While it has been clear for some time that the NDP leadership was willing to do or say just about anything for a shot at power and to vigorously present itself as totally devoid of any trace of radicalism and as fully embracing of capitalism and its ethos, this crosses a Rubicon to outright celebration of one of the most destructive and vile regimes in the modern political history of  the Western democracies.

Given that there is no organized left in the election that is any electoral threat to the ambitions of the NDP, Mulcair clearly can and has made the calculation that he can afford to take his base and left-wingers for granted -- presumably also feeling that given that the party they have so long associated themselves with is so close to power they also will not defect to the Greens who have no chance at power.

But this goes further than simply taking the base for granted. Mulcair is actually and openly thumbing his nose at the leftists and progressives who are lining up to vote for and to, in many cases, continue to defend him.

He has done this before, as with his grotesque purge of any candidates who have been critical of Israel, but this does take these craven tendencies to a whole new level. It repudiates everything the NDP has historically been about.

Thatcher was known for something else as well -- her full frontal assaults on the UK's unions.

So perhaps this should come as no surprise:

Unlike his views on Thatcher have Mulcair's views on "Big Unions" and "union bosses" changed since then?

Perhaps. But I wouldn't bet on it.

See also: Morgan Wheeldon, Israel and the triumph of neo-conservative dogma
Posted by Michael Laxer at 9:56 AM