A yearly trip to Toronto's Canadian National Exhibition (CNE) or "The Ex" is something of a must for many families, my own included. This year's edition kicked off last Friday and runs through to Labour Day.

There is something both nostalgic and wonderfully immediate about its blend of rides, games, shopping and food. It hearkens back to countless county and town fairs, with candy apples, butter sculptures, countless hucksters trying to part you from your money selling gimmicky products of dubious quality, and Midway classics where you are almost compelled to spend money trying to beat obviously nearly impossible contests to win prizes worth far less than what it took to get them!

Today we take a look at some of the sights and, of course, food of the CNE! 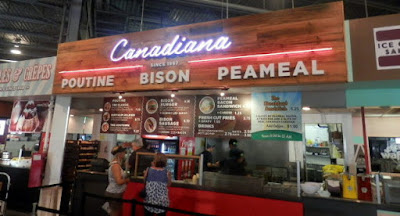 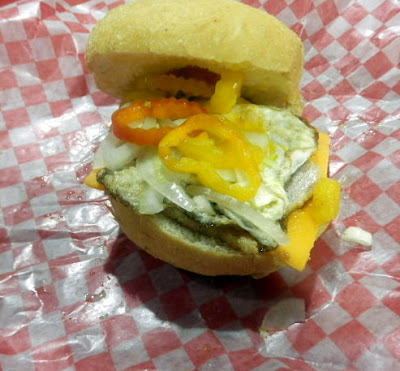 One CNE "institution" and favourite is the Canadiana booth with its Bison Burger. This is a great burger, usually made nice and juicy, and the gamey tang of bison meat is always a tasty alternative to the blandness of so many beef burgers.  It is $6 with some curly fries. The booth has been around since 1967 though a couple of years ago they significantly jazzed up their look.

They also do a solid breakfast sandwich until 11 a.m.with egg, back bacon & cheese. I topped mine with some hot peppers and onion. 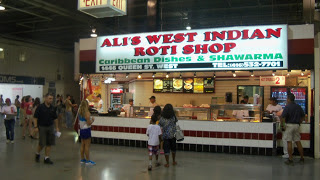 Another yearly Food Building favourite for me is the Ali's West Indian Roti booth. Ali's is one of the best Caribbean take-out joints in Parkdale (a west-end Toronto neighbourhood). I go as often as I can, and have been going for many years. If you are a visitor to Toronto, or have never gone to Ali`s before, the Ex is a perfect chance to acquaint yourself with their fare.They have the full range of roti and rice & peas options, including vegetarian. I had the Curried Goat with Rice & Peas that includes a side salad and comes in at just over $11. 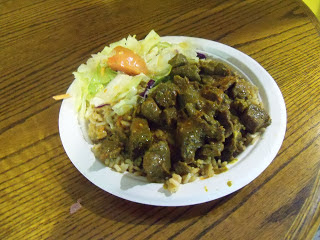 The goat is always perfectly cooked. If you are a fan of hot sauce, trying their fiery house pepper sauce is a must. You can buy bottles of it at their restaurant (though, sadly, not at the Ex for some reason). They also make excellent Doubles, an inexpensive and delicious street food style snack of curried chick peas in a West Indian flat bread "wrap". 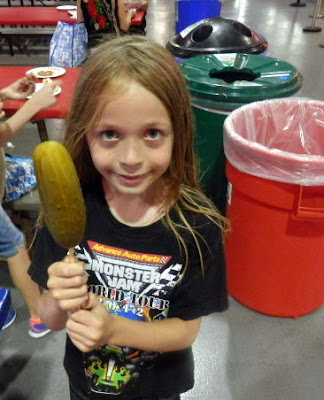 Giant Pickle anyone? Well of course! You can get them at a couple of the schnitzel booths -- usually for $3. 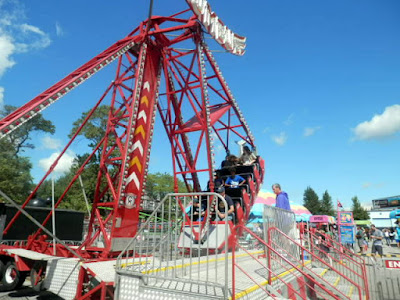 The Columbus. The new swinging ship ride in the kid's ride area. 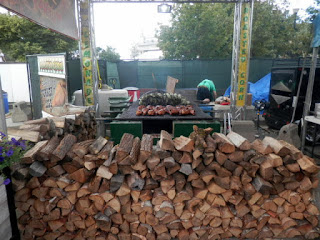 BBQed turkey leg with some BBQed corn anyone? 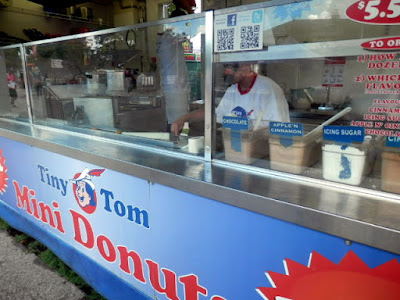 The famous freshly made Tiny Tom mini donuts rolling down  the assembly line. 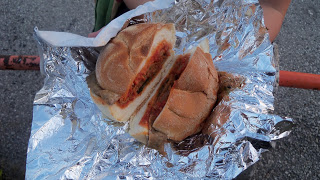 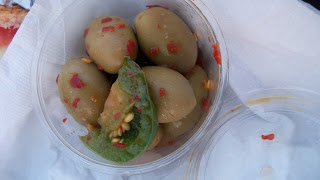 Check out the San Francesco Italian Sandwich's booth. The Clinton St. perennial favourite (though they now have more locations) has been serving up excellent Italian veal, steak, chicken or eggplant sandwiches since 1954 and are now doing it at the CNE food building.. I had the veal sandwich with jalapeno peppers. It comes, as always, smothered in their flavourful, rich tomato sauce. I got a side order of the spicy olives. It all came in at just under $10. 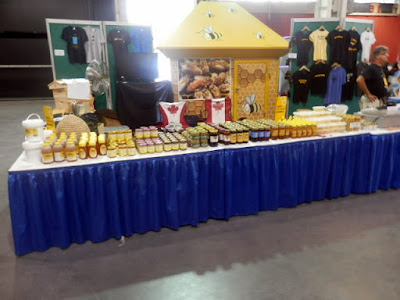 Looking for honey? This stand in the Farm Building has a huge selection of all types of Ontario honey. They also sell  beeswax candles. One thing to note however, is that they are cash only. 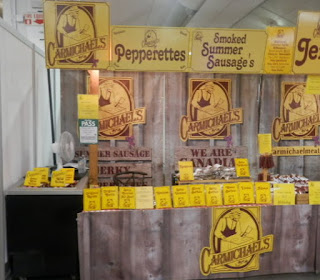 In the Arts Crafts and Hobbies Pavilion is Carmichael's Smoked Meats where you can get all types of pepperettes -- including unusual ones like those made with bison or kangaroo meat! There are some 6 for $5 batches of various spice levels and, one of the better deals at the Ex, bags of 30 standard pepperettes, either mild or hot, for $10 each. 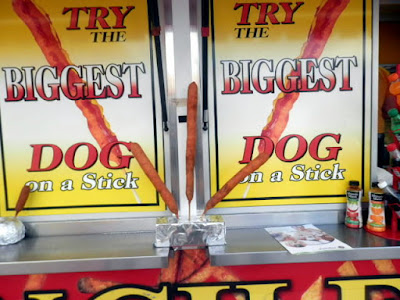 Rather speaks for itself! 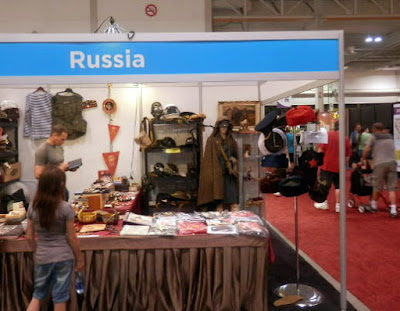 Looking for Communist and Soviet collectibles, T-shirts and paraphernalia? Believe it or not at this booth in the International Pavilion you can find just that! 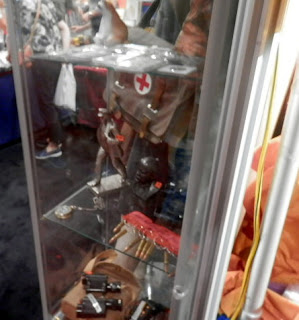 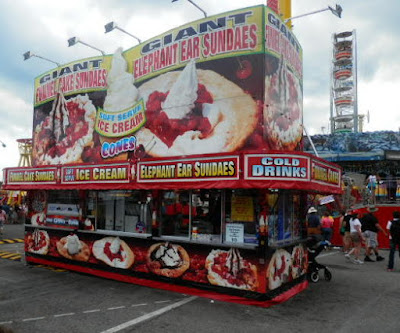 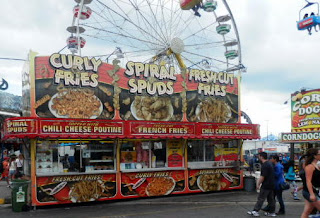 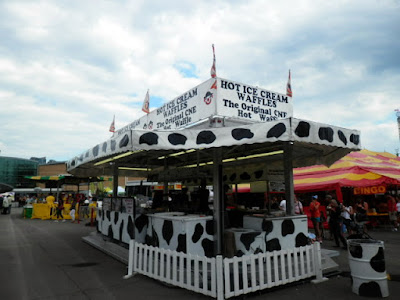 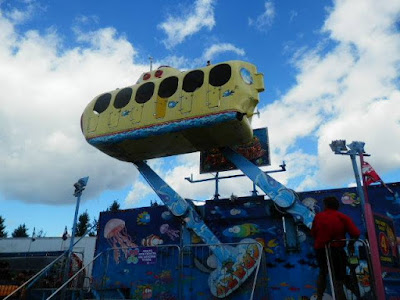 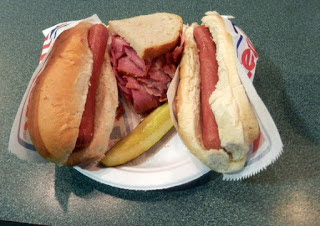 One of my perennial faves at the food building for breakfast or a snack -- half a Montreal smoked meat sandwich with two "steamie" hot dogs for $6.50 at the Montreal Deli booth. 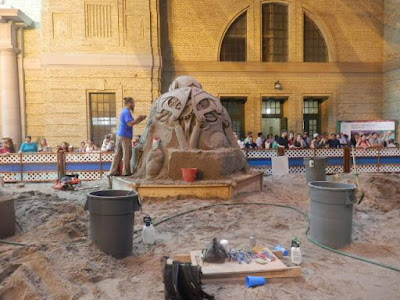 The annual international sand sculpting competition is back! 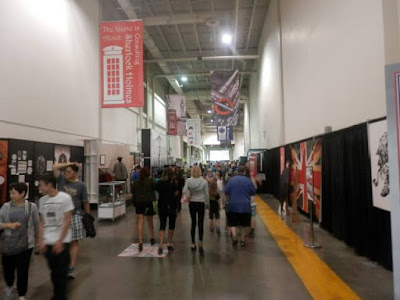 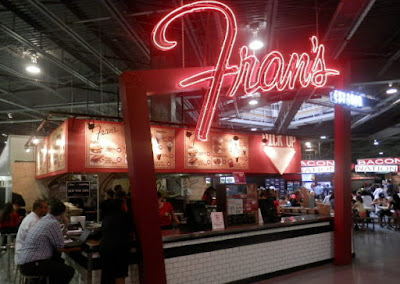 The famous Toronto diner and breakfast joint Fran's has a food building booth now. While I am not a big Fran's fan anymore, the booth has one notably Ex-style outrageous dish...a Thanksgiving Waffle which consists of turkey, gravy and stuffing wrapped in a waffle. Messy and delicious for $12. 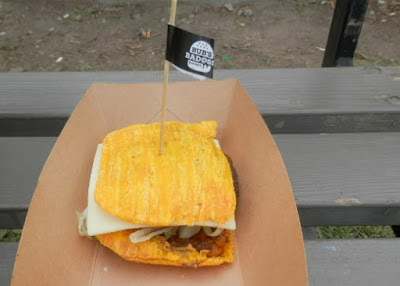 One of the food items with the most buzz this year is the One Love Burger at the Bub's Bad@ss Burgers food building booth. It is a burger served with Monterrey Jack cheese in between a Jamaican beef patty cut in half to serve as the bun. Costs $10 with tax and a "deluxe" version with hickory sticks and a special sauce is available.

Does it work? Well, I have certainly never had a burger quite like it and it was full of flavour. But it is really, really heavy and I think that overall I would have preferred a cheese burger and maybe a patty as a snack later! But still, fun to try. 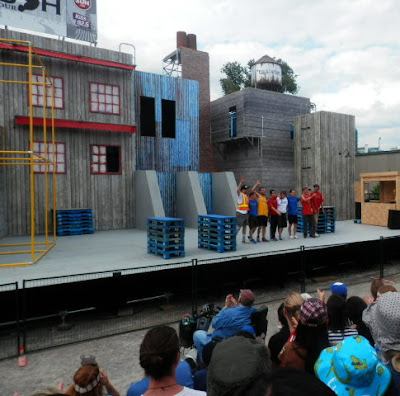 Highlight of the day in some ways...the really wild live musical stunt show Rush featuring "athletes from Toronto’s The Monkey Vault Training Movement Centre". It was gravity defying and very exciting. On three times daily it is well-worth checking out. 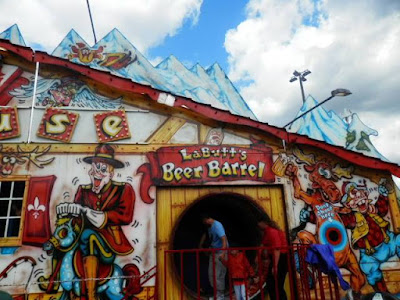 This is our 2015 EX round-up. Can't wait to go again with the family next week!

Posted by Michael Laxer at 2:42 PM