America deserves to dream big...and it needs Bernie Sanders -- An Open Letter to Democrats from a Canadian socialist 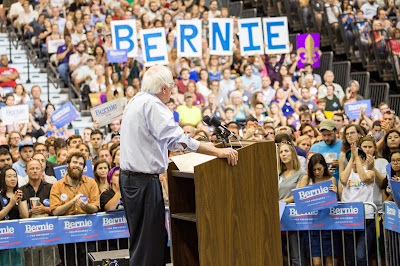 My writing name is A.M. I'm a musician and writer here in the city. I'm also involved in what I would call socialism, though I trust you would hesitate to give it such a politically-charged label. Our activisms probably amount to what are essentially the same things: signing petitions; walking picket lines; engaging in civil disobedience; charitable donations. I could go off here on a tangent about what socialism really means; or why I think you should be a lot more afraid of Barack Obama than you now are; or about the evils of the so-called "free market." I could pontificate and rip into you for upholding any one of a million structures of oppression (in which, it must be said, I am also complicit), but I'd instead like to do two things -- convince you to vote for Bernie Sanders, and convince you to at least entertain the possibility of your party moving to the left.

Our nations, and indeed the entire planet, are at a critical moment. Climate change is threatening our very existence as a species. The ever-present possibility of global war (over religion, race, oil -- you name it) seems to be drawing nearer each day. I won't insult your intelligence by going into detail about these or any other issues threatening humanity - you possess the same mental faculties that I do.

What I will say instead is that I believe you need to change your perspective. This might seem rude and presumptuous, but let me explain.

I want you to think, for a moment, about where you were and what you were doing when Barack Obama swept his way into the White House. I was sitting on my bed, watching CNN with my mom and crying. Much like you, I was overcome with positive emotion - hope, love, compassion, and so on. It took only a few short months, however, for me to realize that Obama had sold us a bill of goods. As the economy continued to sputter, I witnessed firsthand the effect that government cuts (which I will henceforth refer to as austerity) were having on my mom, a nurse at a hospital in downtown Toronto. Much like you, I began to feel ever greater pressure as a result of this austerity - increased fees at school, worsened health care, and the like. My views began to change. Perhaps Obama was not the salvation we were told he would be. Perhaps the Democratic Party, which had been positioning itself for years as the "anti-Bush," was actually not on the side of working people.

I am witnessing a similar phenomenon in my own country. We just rid ourselves of our former Conservative Prime Minister Stephen Harper, replacing him with a young, articulate, well-spoken leader (sound familiar?) who makes all the right noises in public, but is in fact beholden to all the same class interests as Harper. Our new Prime Minister, Justin Trudeau, has garnered a reputation as a peaceful, compassionate man. He even brought gender parity into our national Cabinet! And yet, working people are making less with each passing day, and the cost of living keeps rising.

As long as I live, I will never forget the day I became a socialist. We had just walked back to class from my high school auditorium, where we had been treated to a public "showing" of the Obama inauguration. Frustrated, my normally reserved music teacher could not hold back any longer. He pointed out the hypocrisy of an American President who talked about judging nations by the scale of the things they built, not what they destroyed. Look at Obama's advisors and donors; look at his belief that the war in Iraq was a strategic blunder and not what it really was -- a breach of international law and probably the single greatest war crime since Vietnam!

It finally clicked for me that (the overwhelming majority of) governments are not on our side. Even more to the point, they are actively opposed to the interests of their citizens!

One of the more common (and apparently convincing) arguments put forward by the Clinton campaign is that a party based around single-payer healthcare, more humane drug policies, and the other policies Sanders is fighting for is doomed to fail.

But I'd like to give you a very short lesson in one part of Canadian history.

In 1934, in the Canadian prairie city of Regina, a few dozen farmers, writers, activists and assorted ne'er-do-wells gathered to form a new political party. This political party, named the Co-Operative Commonwealth Federation (CCF), believed that the means of production -- and hence the economic power -- of our country should be harnessed for the good of all. While calling most prominently for universal healthcare (including dental services, prescriptions, and many other things that Canada's Medicare scheme still lacks), the CCF programme also advocated for unemployment insurance, pensions for the elderly, tuition-free schools, protection for farmers and homeowners fighting foreclosure, and many other policies that likely appeal to you as a Democrat!

Famously, at least among Canadian socialists, the final lines of the Regina Manifesto stated that "No C.C.F. Government will rest content until it has eradicated capitalism and put into operation the full programme of socialized planning which will lead to the establishment in Canada of the Co-Operative Commonwealth."

All this from a bunch of unschooled farmers and Prairie preachers!

Of course, they didn't win everything.

As you probably can tell, capitalism is alive and well in Canada. But there were (and continue to be) some extremely important victories. As I mentioned above, the CCF advocated for unemployment insurance, pensions and universal healthcare. To a great degree (though not great enough), we have those things in Canada. Every single election -- federal and provincial -- Canadians debate healthcare. We talk incessantly about expanding our social programs, not eliminating them. Even Prime Minister Harper, who hobnobbed with Islamophobes and corporate vultures, never came out publicly and talked about dismantling Medicare. Millions of lives, including my own, have been greatly enriched as a direct result of socialist policies won by grassroots, socialist struggles.

Simply put, you must aim high if you intend to win major victories for those living in poverty, the unemployed, workers and the elderly. You must dream of utopia if you intend on even the small victories.

Bernie Sanders is not a perfect candidate, of course. I could point to his basically unwavering support for Israel, or his voting for Clinton-era crime "reforms", as evidence of his unworthiness as a candidate. I personally have deep reservations with the Sanders platform. And as a libertarian socialist, I disagree in principle with the very idea of peoples' movements shepherded by leaders, no matter how humorously cantankerous they may be. I believe that our countries belong to us.

Bernie Sanders and his frankly mild form of social democracy are not perfect. But I urge you to put yourself in the shoes of those CCF organizers. Here were a desperate bunch of people - but they dreamed of something bigger, something greater, something truly humane. They didn't get there, but I'm sitting here writing this today because of the very real, hard-won victories of Canadian socialism. Perhaps the Sanders candidacy is unrealistic, as Clinton supporters are so fond of saying. But people deserve better than a "realistic" politics. People deserve utopia.

“To be hopeful in bad times is not just foolishly romantic. It is based on the fact that human history is a history not only of cruelty, but also of compassion, sacrifice, courage, kindness.
What we choose to emphasize in this complex history will determine our lives. If we see only the worst, it destroys our capacity to do something. If we remember those times and places—and there are so many—where people have behaved magnificently, this gives us the energy to act, and at least the possibility of sending this spinning top of a world in a different direction.
And if we do act, in however small a way, we don’t have to wait for some grand utopian future. The future is an infinite succession of presents, and to live now as we think human beings should live, in defiance of all that is bad around us, is itself a marvelous victory.” - Howard Zinn

A.M. is a writer in Toronto

Posted by Michael Laxer at 3:44 PM