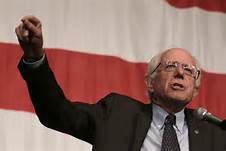 Yesterday, the Bernie Sanders campaign for the Democratic Presidential nomination released a campaign ad unlike any you have ever seen.

There has never been a political ad for the candidate of a mainstream party like this in either the United States or Canada ever. Period.

It is a powerful and stunning piece that features the moving and forceful words and reflections of Erica Garner, the daughter of Eric Garner who was murdered by New York police.  In it Sanders actually stands up against police violence and systemic racism in policing and the "justice" system in a way almost unimaginable in our stunted political discourse and stands with the activists on the frontlines fighting it.

This is an important political statement and moment and many activists and people fighting for civil rights across the continent have waited forever to see something like it. It takes up the cause directly not of the "middle class" or the business class but of the marginalized and oppressed whose fight is truly not over and who have been abandoned and, indeed, assaulted by three decades of neo-liberal attacks. These were often perpetrated by those who purported to represent them, including Bill Clinton who as President actively supported the dismantling of the welfare state and the passage of terrible new crime bills that targeted people-of-colour and those living in poverty and that led to the creation of the now vast American penal gulag.

Bernie Sanders may not be perfect, but he is willing to tell at least some truths in ways absolutely no else in mass politics right here, right now is.

There has been nothing like it on this scale in a very, very long time. And it may yet help turn the tide.


See also: America deserves to dream big...and it needs Bernie Sanders -- An Open Letter to Democrats from a Canadian socialist

See also: Bernie ascendant
Posted by Michael Laxer at 6:55 AM